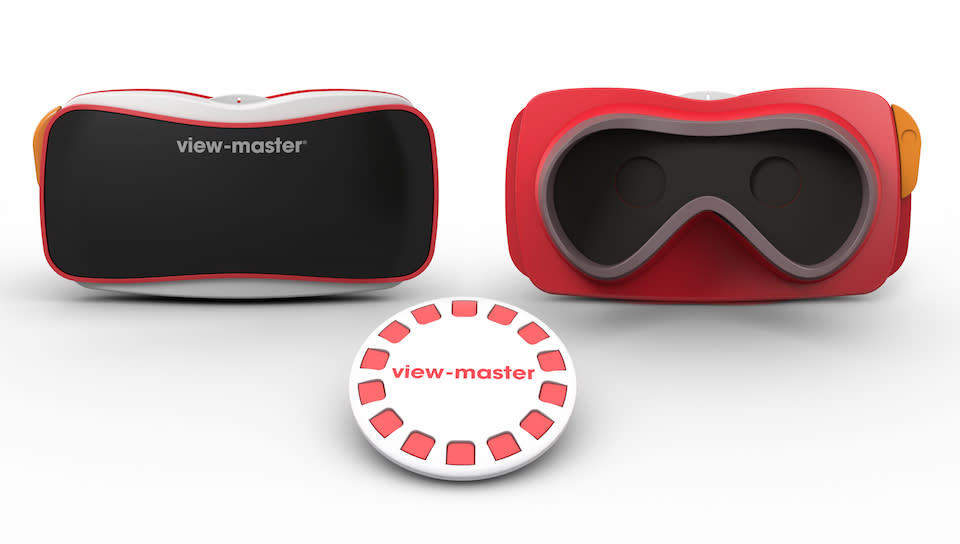 Remember View-Master? That hunk of plastic you held up to your face, stuck cardboard reels into and advanced through 3D images of landscapes, animals and cartoons with the satisfying pull on a lever. Well it's back and Mattel has Google to thank for helping drag the classic toy into the 21st century. The main piece is an update to the iconic red-bodied View-Master that looks a little bit like a Fisher-Price take on the Oculus Rift. The orange lever is still there, albeit in a more compact form, and the front is dominated by a black, branded piece of plastic. But rather than stationary slide, you insert a smartphone into the plastic body which, when paired with the View-Master app and a View-Master "experience reel," lets you experience 360-degree worlds, photosphere and educational "field trips." There will even be bonus content such as historical footage, photos and behind the scenes video that you can access by clicking on icons hovering around objects, people and landmarks in the virtual world.

The View-Master experience reels are a little different from the slide reels you're used to. Instead of inserting them into the View-Master itself, you place them in front of you while you look through the device. Icons representing different experiences then pop out of the reel as augmented reality navigational aids. The reels are purely optional, kids can simply download content directly from the app if they so wish. But, as Doug Wadleigh of Mattel told the press at an event today, kids still like to collect things, and having physical reels to collect will satisfy that urge. It should also help placate older fans who have spent lifetimes collecting slide reels.

This is actually the first major update to the View-Master since it was first introduced in 1939. Sure, it has a history beyond simply being an educational toy (both the military and medical schools have used its 3D images to train people), but it's always worked pretty much the same way; A circular cardboard reel containing 3D slides is inserted into a stereoscopic viewer and manually advanced. That basic experience hasn't changed for nearly 75 years.

The whole experience is built around Google's Cardboard, a simple and affordable VR platform that uses an Android smartphone as the heart of the device. As we've learned, Cardboard is not some half-hearted hobby project from Mountain View, it's the earnest starting point for the company's virtual reality ambitions. That also means that you don't necessarily need to buy Mattel's $30 View-Master to get the same experience. Though, seeing as how that price gets you a sample experience reel and the plastic viewer that should be more durable than a version actually built of cardboard, if you don't already own a viewer this would seem like a good value.

Sadly, you'll have to wait until the fall to get your hands on the new View-Master. Once the viewer and app land later in October, you'll be able to pick up additional experience reels as packs of four for $15. What's more, iOS support for the gadget is on its way, too.

In this article: cardboard, fisher-price, google, mattel, toys, view-master, virtual reality, vr
All products recommended by Engadget are selected by our editorial team, independent of our parent company. Some of our stories include affiliate links. If you buy something through one of these links, we may earn an affiliate commission.