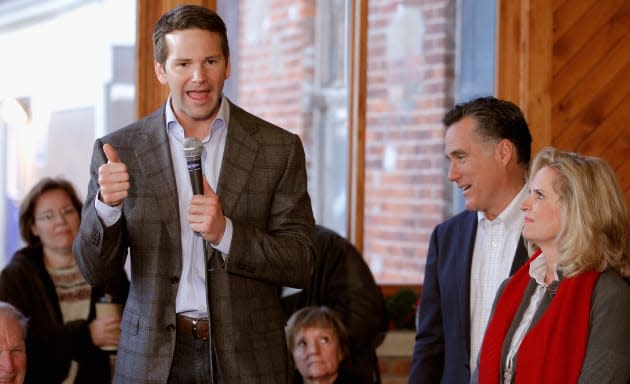 Rep. Aaron Schock (R) from Illinois has been spending taxpayer money on renting private jets, getting massages and taking his staff to sold out concerts, according to the Associated Press. And, get this: AP says it has confirmed all those times he rented a private jet, thanks in part to his Instagram posts. AP extracted location data from his photos and compared it with the records for each flight billed against his office. Current rules state that lawmakers can use taxpayer money to pay for their share of the cost for private flights (other passengers would have to pay for their share), but that was only approved in January 2013.

Schock's office allegedly paid $24,000 for just eight private flights in 2011 and 2012, back when it was only legal to use the people's money for commercial or federally licensed charter flights -- he would have needed approval from the House Ethics Committee for those trips. The planes he rented, by the way, are owned by his campaign donors, including one of his friend's fancy Italian-made Piaggio twin-engine turboprop. All in all, AP has discovered that his office shouldered the expenses for over 12 flights worth $40,000 since 2011.

In addition to those private flights, AP has found that Schock is billing his office a whopping $18,000 for car mileage reimbursement since 2013, one of the highest among all lawmakers in Congress. His records also show a $1.5 million contribution to the GOP Generation Y Fund since he became a representative in 2009. The Generation Y Fund paid for $24,000 worth of tickets Schock bought, including ones for a sold-out Katy Perry concert he attended with his interns in June 2014. One of those interns even took a leaf out of his book, posting "You can't say no when your boss invites you. Danced my butt off," on his Instagram account.

This isn't the first time Schock's actions are being called into question. Back in 2012, he was accused of illegally soliciting money, and he's generally known for leading a lavish lifestyle, even decorating his office to look something right out of Downton Abbey.

In this article: AaronSchock, congress, expenses, facebook, instagram, politicians, scandal, socialmedia
All products recommended by Engadget are selected by our editorial team, independent of our parent company. Some of our stories include affiliate links. If you buy something through one of these links, we may earn an affiliate commission.