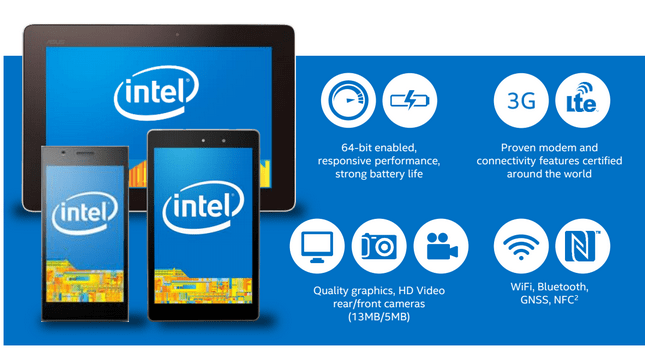 Intel's been slow to transform itself for the new mobile world, but with its latest family of Atom chips, it may finally be able to go toe to toe with Qualcomm. The chip giant announced the Atom X3, X5 and X7 processors at Mobile World Congress today, giving it an arsenal that can fit into both budget and high-end devices (and everything in between). Specifically, Intel's targeting the new X3 chip at devices under $75, while the X5 and X7 are aimed at gadgets priced at $119 or more. The X3 also marks the first time it's been able to integrate a modem into a system-on-a-chip (it's available in both 3G and LTE variants). While Intel's still struggling to become a player among Android devices, these new chips offer something that Qualcomm doesn't: full Windows support. They put Intel in a prime spot to cash in as device makers start designing their Windows 10 wares (which will include everything from phones to high-end desktops).

All of Intel's new Atoms offer 64-bit architecture, but the X5 and X7 are also notable for being the company's first 14nm mobile chips. Basically, that should allow them to be powerful without sipping too much battery life. Intel claims the X7 is also twice as fast in GFXBench compared to its former Atom heavyweight, the Z3795, as well as 50 percent faster in 3DMark. So who's going to use these things? Partners include ASUS, Foxconn and Pegatron for the X3, while the X5 and X7 are going to be used by Dell, HP, Lenovo, Acer, Toshiba and, of course, ASUS once again. Intel didn't reveal availability details, but don't be surprised if these new chips start popping up in newly announced devices over the next few months. And you can expect an explosion of Atom-powered gadgets leading up to the Windows 10 launch later this year.

In this article: Atom X3, Atom X5, Atom X7, mobilepostcross, MWC2015
All products recommended by Engadget are selected by our editorial team, independent of our parent company. Some of our stories include affiliate links. If you buy something through one of these links, we may earn an affiliate commission.