The Road to Mordor: A conspiracy of hats 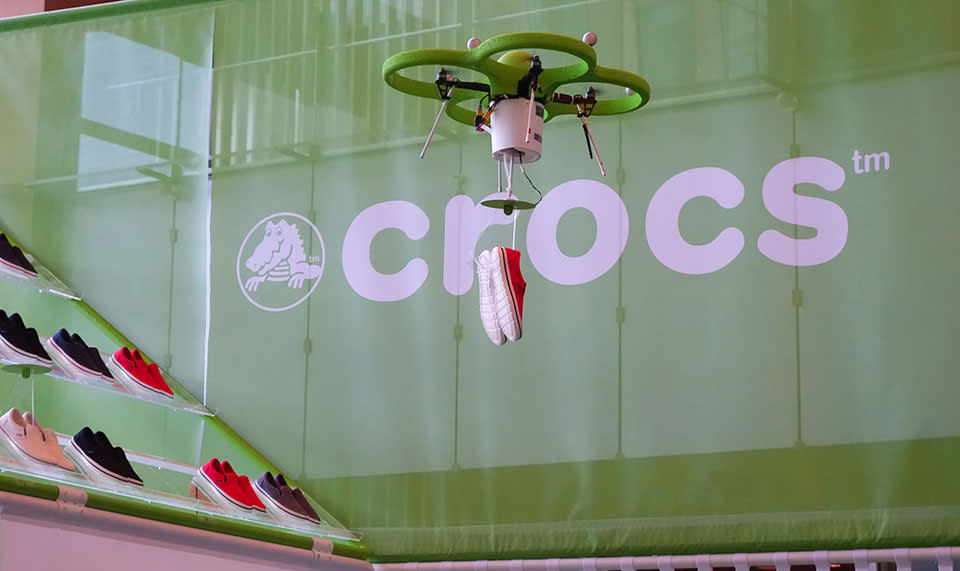 My friends and family don't let me wear Crocs. But still, I'm in the middle of Tokyo to see Crocs send a drone flying to pick up a (hypothetical) customers' shoes. It's all to do with promoting the shoemaker's new range of lightweight Norlin footwear -- they're not the Crocs you're thinking of -- and it involves a custom-built drone delivering the correct style and size to the customer. On top of that, it's all automated, so it's like a giant Crocs-themed vending machine... albeit with drones. "The flying Norlin project" was made to celebrate ten years of Crocs in Japan -- yeah, you see a lot of pairs of Crocs here. The concept is the company's perhaps overly-elaborate way of explaining how light its new sneakers are. The custom-built drones have arms especially built for hooking the sneakers of your choosing, and this particular flyer can handle up to 600 grams -- enough to handle one of eighty pairs on show several meters high. To reiterate, the new shoes are light. Let's not forget that. Very light. Yes.

Sports retail sales assistants: your jobs are very much safe for now.

At the big press event unveiling, the drone builds up a bit of momentum, then deep-dives towards a pair of sneakers in order to hook them off. However, in reality, sometimes it didn't quite pull it off. It's like it was playing a crane catcher game in an arcade -- so close.

The initial run was a success however, and we saw a few more pairs get hooked eventually. Sports retail sales assistants: your jobs are very much safe for now. Don't expect these giant Crocs stores to appear in your neighborhood -- or anywhere else for that matter. The project got some help from conceptual engineering and design teams Birdman and Enjin, but it's just this single 'mid-air' store that's the result.

Contextually, if a company could ensure the safety of customers, and had the ceiling height for it, there's not much to stop this being a very real thing -- it's more about the spectacle of the delivery than the product, arguably. (And just how efficient could a drone be? Battery life isn't one of their strong points.) Japanese customers will be able 'experience' the drone store in Tokyo Midtown until the end of the weekend, although it seems like they'll have to make their actual purchases at normal stores, and interact with, ugh, other humans.

In this article: crocs, drone, dronedelivery, drones, japan, shoes, trainers, video
All products recommended by Engadget are selected by our editorial team, independent of our parent company. Some of our stories include affiliate links. If you buy something through one of these links, we may earn an affiliate commission.