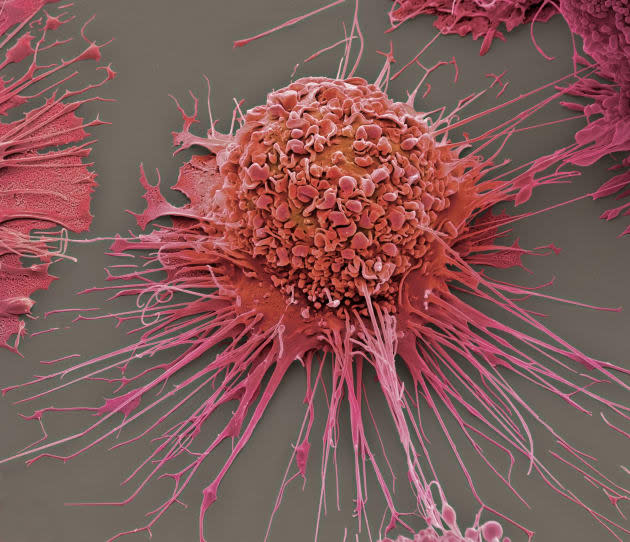 A team at Stanford's School of Medicine has reportedly uncovered a potent new treatment method for combating one of leukemia's most aggressive forms -- and they did it pretty much by accident. While survival rates for B-cell acute lymphoblastic leukemia, a particularly nasty form of white blood cell cancer, have risen to about 85 percent over the past decade thanks to the advent of stem cell therapies, the prognosis for this disease in the presence of a Philadelphia chromosome mutation remains quite poor. But thanks to a chance observation by Dr. Scott McClellan, the Stanford team believes it's figured out way to neutralize the disease using its own cancerous cells against it.

The research effort began when, in the lab one day, McClellan noticed that a number of leukemic cells had transformed from cancerous cells into "mature" macrophages. These are a type of immune cell tasked with not only directly consuming cellular debris, pathogens and cancers but also with recruiting other immune cells for the fight. "B-cell leukemia cells are in many ways progenitor cells that are forced to stay in an immature state," Dr. Ravi Majeti, an assistant professor of medicine at Stanford, said in a statement. But with the addition of various transcription factors -- proteins capable of latching onto and activating specific DNA sequences -- Majeti and McClellan essentially forced these deadly cancer cells to "grow up" into fully formed macrophages.

What's more, the researchers discovered that this process didn't just neutralize that specific cancer cell. It also instigated the newly made macrophage to begin digesting the cancerous plague and call in the rest of the immune system to actively fight the mutation. "Because the macrophage cells came from the cancer cells, they will already carry with them the chemical signals that will identify the cancer cells, making an immune attack against the cancer more likely," Majeti said. Now that the cellular mechanism is known, the team's next challenge is finding a drug that instigates the same response and can be leveraged as the basis for a new therapy regimen. The team's research appears in the latest issue of the Proceedings of the National Academy of Sciences.

In this article: cancer, cancer treatment, genetics, Leukemia, medicine, Stanford, Stanford University
All products recommended by Engadget are selected by our editorial team, independent of our parent company. Some of our stories include affiliate links. If you buy something through one of these links, we may earn an affiliate commission.