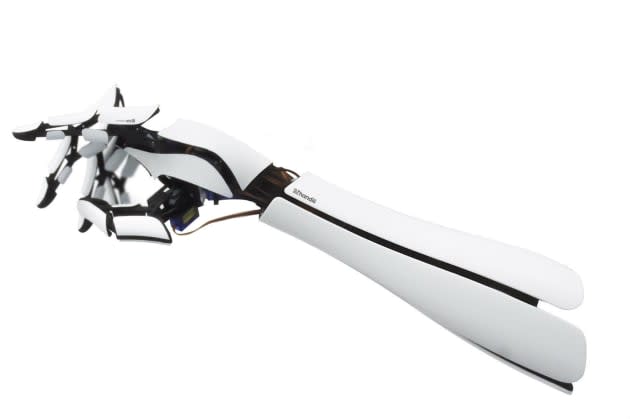 Iron Man isn't the only one 3D-printing artificial limbs these days. But unlike the mechanical hand delivered by Robert Downey Jr, this recently unveiled prosthetic from Japanese manufacturer Exiii costs just $300 and leverages your mobile device's computing power to act just like the real thing. The Ghost in the Shell future we've between waiting for came took a step closer to reality.

The Handiii bionic limb's exterior is completely 3D-printed. This not only keeps each unit's initial production costs low (it's already dropped $50 since we last saw it at Maker Faire Tokyo), the technique also makes fabricating replacement parts faster and easier as well. But despite its bargain-basement price, the Handiii is packed with electronics. An EMG sensor detects electrical impulses emanating from the user's remaining limb stump and converts those impulses into physical movement through a series of servos. What's more, it connects wirelessly to your cell phone or tablet using the mobile device's CPU to interpret these signals and initiate movement.

Unfortunately, there's already a waiting list for these handy devices, partly due to a backlog of existing orders. Its creators are also focusing on getting these arms into the hands of academic and industrial researchers -- potentially as an open-source platform -- before beginning deliveries to the general public.

In this article: 3dPrinting, exiii, handiii, Japan, prosthetic
All products recommended by Engadget are selected by our editorial team, independent of our parent company. Some of our stories include affiliate links. If you buy something through one of these links, we may earn an affiliate commission.