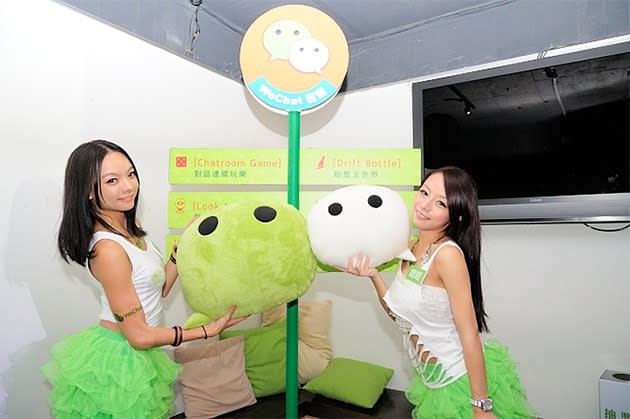 Life for China's porn aficionados is about to get a little tougher -- a recent Reuters report points out that the country is cracking down on all the naughty content that's being shared on WeChat. It's not just photos and videos that'll be targeted either. The country's Cyberspace Administration has said text, like tales of "one-night stands, wife-swapping, sexual abuse and other harmful information" will be subject to the same sort of scrutiny, as will typed-up ads for sexual performance enhancers and STD treatments. Getting pegged for your first offense means violators will have their accounts shut down for a week, but rack up four such infractions and voila -- they'll be banned from WeChat for good.

Or, you know, until they find a way to register a new account.

You'd be forgiven for not knowing exactly what WeChat is -- the hugely popular messaging app has about a half billion people using the service on a regular basis, and about 80 percent of them live in China. Kik and Whatsapp have a long way to go before they move give Tencent's messaging app a run for its money there... though the latter does have an estimated 700 million people using the app monthly around the world.

The Great Firewall has long been used to suppress China's predilection for porn, though VPNs have been used to sidestep that sort of censorship for just as long. It's almost a rite of passage for foreigners in the country cut their teeth on a proxy service so they can still enjoy their smut, or beloved episodes of Orphan Black. Life finds a way. What's less clear is whether this move will see users in China jumping ship to more secure services like Telegram. We sort of doubt it -- old habits are hard to break, after all -- but the quest for sexual liberation demands drastic action.

In this article: app, apps, china, messaging, mobilepostcross, wechat
All products recommended by Engadget are selected by our editorial team, independent of our parent company. Some of our stories include affiliate links. If you buy something through one of these links, we may earn an affiliate commission.