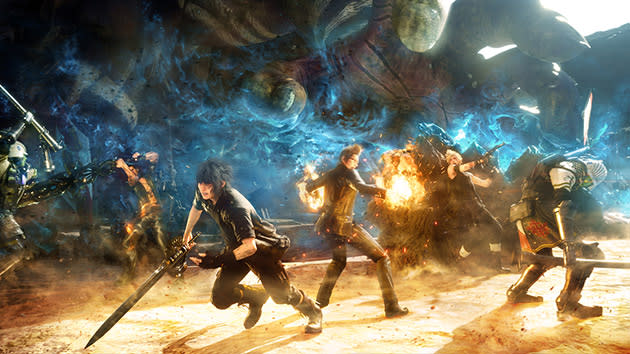 Final Fantasy XV's playable demo confirmed suspicions that the long-awaited game's core playable characters are all, well, men. For those wondering, even just a bit, why the creators came to that decision when previous main titles featured mixed-gender teams, well here's your explanation. FFXV director Hajime Tabata sat down for an interview with GameSpot, where he revealed his reasons and shed light on the issue. Apparently, he wanted characters whose actions make you think "boys will be boys." He also believes that "an all-male party feels almost more approachable for players," and that even "one female in the group will change their [the four best bros'] behavior."

Nevertheless, he didn't say whether the women we met in the trailers, such as Cidney the mechanic, will be playable later in the game. So cross your fingers... unless, of course, you couldn't care less that FFXV's a dudefest.

Here is Tabata's full answer to the question (emphasis ours):

Speaking honestly, an all-male party feels almost more approachable for players. Even the presence of one female in the group will change their behaviour, so that they'll act differently. So to give the most natural feeling, to make them feel sincere and honest, having them all the same gender made sense in that way.

The world might be ready to see the curtain lifted on what boys do when girls aren't around, when they come out of the tent all prim and proper. That's kind of the idea behind it... we think, male or female player, that everyone will feel a certain connection and bond with the four characters.

In this article: copyright, europeancommission, FinalFantasy, FinalFantasyXv, law
All products recommended by Engadget are selected by our editorial team, independent of our parent company. Some of our stories include affiliate links. If you buy something through one of these links, we may earn an affiliate commission.