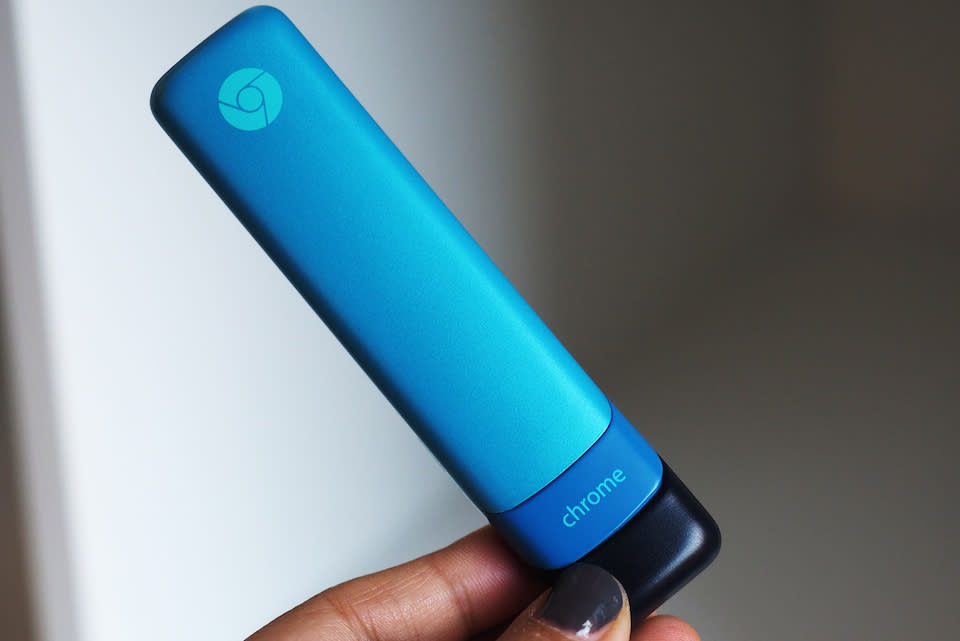 Google has unveiled a whole new type of Chrome device, and it's one that can fit in your pocket. It's called the Chromebit, and it's essentially a Chromebook crammed in a dongle. This tiny little package contains a Rockchip 3288 SoC, 2GB of RAM, 16GB of eMMC memory, a USB 2.0 port, WiFi 802.11 ac support, Bluetooth 4.0, a Smart Ready controller and an ARM Mali 760 quad-core GPU. Just like Intel's Compute Stick, all you have to do to get the Chromebit working is to attach it to any display with a HDMI port, and voila, you've turned it into a computer. Unlike the Intel stick though, the Chromebit's HDMI end actually swivels around so that the dongle doesn't stick out in an unsightly way behind a monitor or TV. As for battery life, well, Google says it doesn't really know that just yet as the product is still in testing. Google promises that the Chromebit -- the first is made by ASUS -- will retail for less than $100. It'll be available in either silver, blue or orange and will be out later this summer. 11
In this article: asus, chrome, chromebit, chromeos, google, hands-on, hdpostcross
All products recommended by Engadget are selected by our editorial team, independent of our parent company. Some of our stories include affiliate links. If you buy something through one of these links, we may earn an affiliate commission.