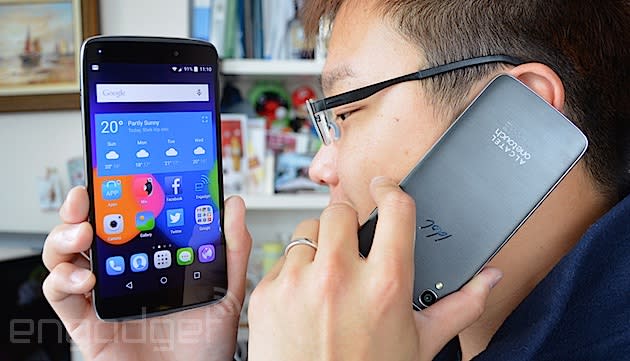 Wondering when you could get your hands on the Alcatel OneTouch Idol 3? You know, the Android smartphone that can take calls upside down? Well, it shouldn't be too much longer. Pre-orders start April 21st with a $249 asking price for the 5.5-inch version (pictured above, left). As Android Central notes, that's a $30 break if you lay money down now as opposed to later on down the road. The official launch date is still rather ambiguous, but a press release over on 9to5Google says that the unlocked Lollipop devices start shipping sometime in May.

Update: Slight change of plan: Alcatel OneTouch is now doing a "limited time early pre-sale" ahead of the original April 21st pre-order launch. Better yet, the phone will cost just $199.99 during this period, which translates to a $50 discount.

In this article: Alcatel, android, idol3, lollipop, mobile, mobilepostcross, OneTouch, onetouchidol3, preorder, unlocked
All products recommended by Engadget are selected by our editorial team, independent of our parent company. Some of our stories include affiliate links. If you buy something through one of these links, we may earn an affiliate commission.