These tiny gecko-inspired robots can lift over 100x their weight 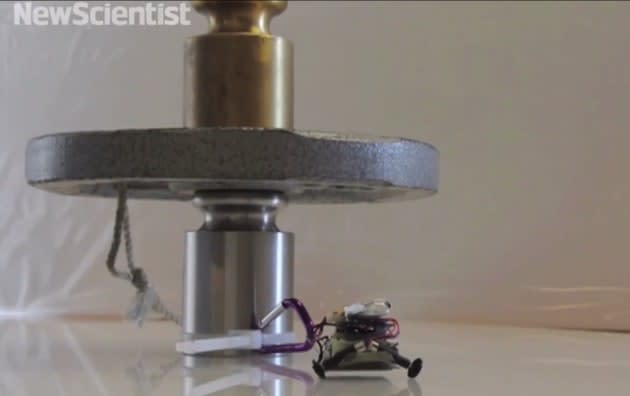 Beware the tiny robot uprising, which at this point are taunting us with the equivalent of superhuman strength. Researchers at Stanford have created several tiny bots that can move things more than 100 times their weight, reports New Scientist. They're the latest example of the university's research into mimicking the climbing abilities of geckos. The robots feet contain adhesives that manage to hold onto the wall even when they're carrying heavy loads, and easily detach when they need to move. And as you can see in the video below, the bots' movement is also inspired by nature, going forward one step at a time like an inchworm. One nine gram robot can lift something that weighs a kilogram (in the video it's hoisting Stanford's 2006-era "StickyBot"), while an astonishingly small 20 milligram bot can lift something 500 milligrams (a small paperclip).

The most impressive robot, dubbed μTug, is a 12 gram beast that can drag something 2,000 times its weight. As a Stanford researcher tells New Scientist, that's about the same as a human moving a blue whale.

In this article: geckos, Stanford
All products recommended by Engadget are selected by our editorial team, independent of our parent company. Some of our stories include affiliate links. If you buy something through one of these links, we may earn an affiliate commission.