Hurry up and patch your Chrysler against this wireless hack 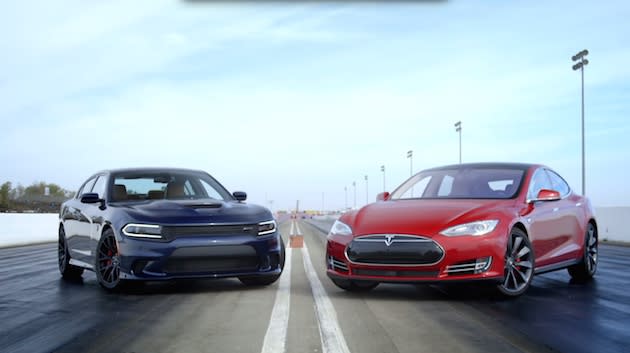 Tesla's Model S P85D is quick. Or is it fast? Can it be both? Ever since Elon Musk unveiled the company's speediest car ever, it's become the fashionable thing to take the P85D to a drag strip and pit it against some old-school gas-powered muscle. Motor Trend did the same, choosing the all-American Dodge Charger Hellcat (the world's fastest sedan) as the Model S' opponent. Now, it's not the first time that these cars have gone head-to-head over a quarter mile, but when they first met, the 707-horsepower Hellcat had such a dismal run that it needed an official rematch with a better driver behind the wheel. There's a handy explanation on the difference between being fast and being quick at the beginning of the video, but if you just want the action, simply hit the play button below. As for the outcome... well, that'd be spoiling it, but let's just say that things could have been different if the strip was longer.

In this article: dodge, dodge charger, drag, drag race, hellcat, tesla
All products recommended by Engadget are selected by our editorial team, independent of our parent company. Some of our stories include affiliate links. If you buy something through one of these links, we may earn an affiliate commission.