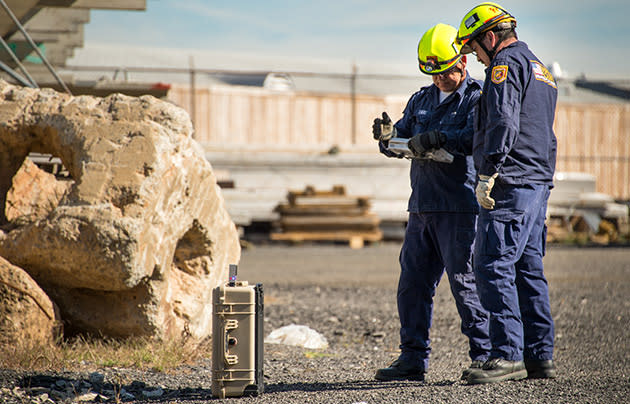 A new search-and-rescue tech by NASA JPL and Homeland Security found living survivors buried underneath 10 feet of debris in Nepal, proving that it works in real-life situations. The briefcase-like device called Finding Individuals for Disaster and Emergency Response (FINDER) can listen for the heartbeats and breathing of survivors trapped beneath up to 30 feet of rubble, behind 20 feet of solid concrete or within 100 feet in open spaces. It uses microwave-radar technology to look for signs of life, after which one of its components can pinpoint the person's location within five feet. That "locator" was added after a round of tests back in 2013.

In Nepal, the two prototype FINDERs that arrived on April 29th (four days after the earthquake) detected the heartbeats of four men -- two each for two collapsed buildings. While NASA and Homeland Security already proved that it works, FINDER will still be demonstrated at the Virginia Task Force One Training Facility on May 7th. There, its creators will also announce that it's going to be commercialized and be available for purchase by various first responders around the globe.

As you've probably guessed, FINDER is another NASA spinoff, particularly of the agency's remote sensing technology. Many technologies the agency developed for space exploration helped advance invaluable and beneficial tech/tools over the years, such as the MRI, artificial limbs and robotic surgeons, among many, many other things.

[Image credit: NASA/Flickr]
In this article: dhs, jpl, nasa, Nepal
All products recommended by Engadget are selected by our editorial team, independent of our parent company. Some of our stories include affiliate links. If you buy something through one of these links, we may earn an affiliate commission.