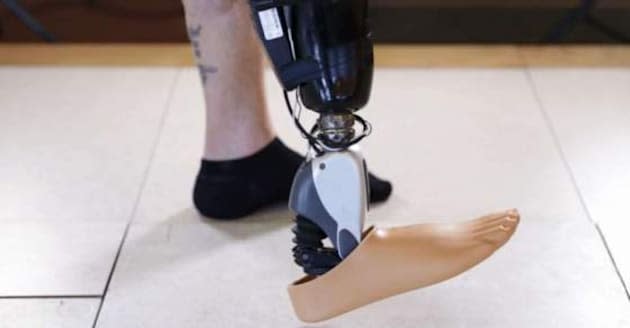 During a press conference in Copenhagen on Wednesday, prosthetics manufacturer Ossur announced the release of an implantable sensor that allows users to mentally control a mechanical limb. The technology, known as an Implanted MyoElectric Sensor (IMES) will allow users to move the company's motorized Proprio Foot just like they do the real thing.

With an existing analog (or even powered) prosthesis, there's often an infuriating lag between intention and action because the user has to physically contract a muscle to activate it. Not so with the IMES system. When electrical signals from the user's brain hit the end of the amputated leg, they're picked up by a pair of sensors embedded in the surrounding muscle tissue. These sensors, in turn, send a wireless signal to the Proprio foot telling it to flex or extend. And since the muscles themselves aren't contracting, there's no lag between thinking about moving and actually doing so. What's more, the implantation surgery only takes about 15 minutes and requires an single single-centimeter-long incision. Even cooler is the fact that the sensors are powered by tiny magnetic coils housed in the prosthetic socket so they won't have to be replaced once installed. "We believe this is a lifelong sensor," Thorvaldur Ingvarsson, Ossur's head of R&D, told Popular Science.

"It's really surreal," Gudmundur Olafsson, one of the the company's two initial test subjects, said in a statement. "The first time, to be honest, I started to cry. You are moving the ankle, and I basically haven't had one in 11 years." Olafsson spent 14 months using the IMES-enabled Proprio as his sole prosthetic.

Up next, the company plans to hold large-scale clinical trials and hopes to have the device to market within the next three to five years. There's no word yet on how much the devices will cost once they do become available.

In this article: legs, ossur, proprio, prosthetic, prosthetics
All products recommended by Engadget are selected by our editorial team, independent of our parent company. Some of our stories include affiliate links. If you buy something through one of these links, we may earn an affiliate commission.