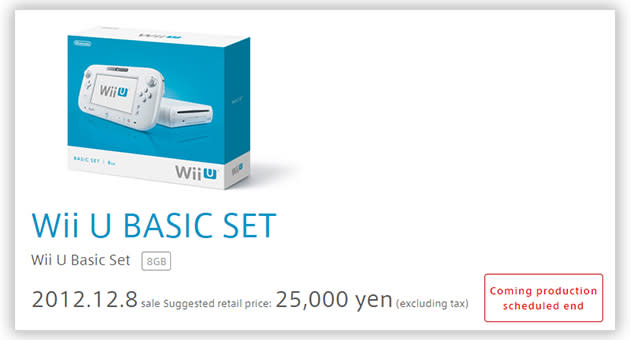 Nintendo is about to halt production of its 8GB Wii U Basic in Japan, according to a notice on its product site. The white-clad product has been around since 2012, but was never super popular since the 32GB version is typically only $50 more. In fact, the rumor mill had it being killed off two years ago after it went out of stock at GameStop and Best Buy, though Nintendo later called that a "misperception." Somehow the model has hung on until now, but has gradually become harder to find.

There's no word on whether Nintendo plans to kill the basic version in the US and Europe, but a Japanese death often presages a similar fate elsewhere. However, the company plans to launch a white version of the 32GB Premium model, so at least you won't get too nostalgic for the color.

In this article: 8GB, Discontinued, killed, nintendo, WiiU, WiiUBasic
All products recommended by Engadget are selected by our editorial team, independent of our parent company. Some of our stories include affiliate links. If you buy something through one of these links, we may earn an affiliate commission.