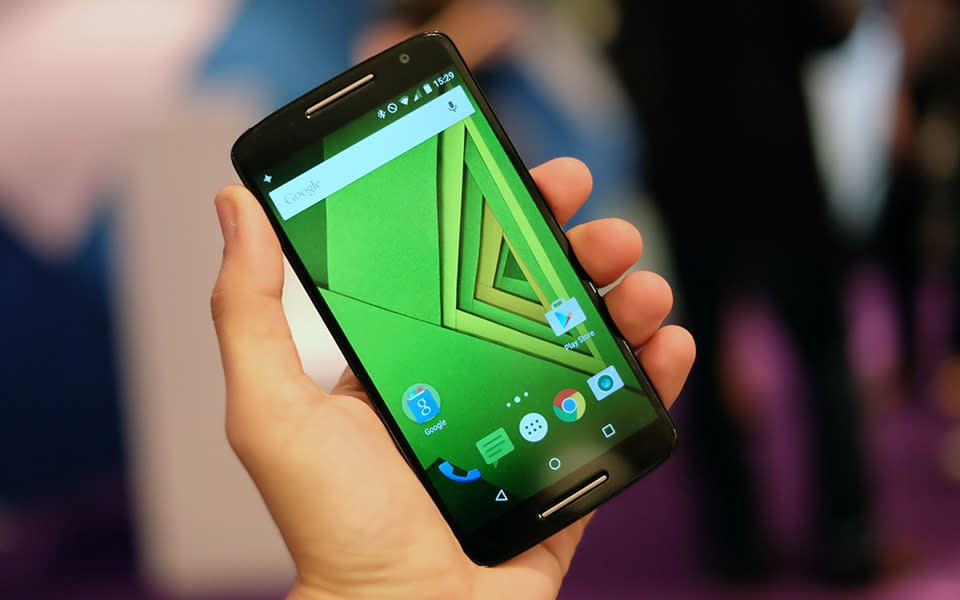 It's fair to say that the Moto X Play is the phone that no one expected from today's big event. Think of it as something between a Moto G and a Moto X. It's got the specs of a mid-ranger like the original Moto X, but has the pop-off covers and more practical design of the Moto G line. It's actually a fairly attractive phone; a little big for my tastes, perhaps, but everything feels well-built and sturdy, even if not mind-blowingly so. In my limited time with it, the 1.7GHz Snapdragon 615 processor seemed plenty fast enough, and its 5.5-inch, 1080p display looks very pretty (although it pales in comparison to the higher-end Style's Quad HD panel). Perhaps the only thing Play owners will be able to lord over Style owners is the phone's enormous 3,630mAh battery, which Motorola claims is good for two days of use, and supports quick charging. I couldn't test either of the Play's cameras extensively, but I can -- very, very tentatively -- say that the photos it captures seem better than I've ever seen from a current-gen Moto X, and the wide-angle selfie camera is indeed a wide-angle selfie camera. Software-wise, the Play comes with a fairly vanilla 5.1.1 Lollipop build, with only a couple of tagged-on features like Moto Voice and Moto Assist. Motorola has already committed to a "brisk" update to Android M when Google's latest and greatest launches later this year.

But who is this phone for? The 16GB version will cost £299 ($467) in the UK, and Motorola is quiet on whether the Play will ever come to the US. It seems Motorola is scared that the Style's £359 ($560) price tag will put off the sort of customers that have opted for Moto Xs in the past. The problem with that strategy is that the Moto G is getting better and better, and if it continues on the upward trajectory it's on, it may well cannibalize the Play's market. We'll have proper analysis of its merits when the Motorola X Play launches this August in the UK, Canada and 53 other countries.

Update: I tried to get more information from a Motorola rep about the release schedule and the possibility of the X Play coming to the US in the future. The conversation went like this:

"So when and where is this coming, and when will it come to the US?"

"Mid-August, 55 countries including Canada and the UK."

In this article: mobilepostcross, moto x, moto x play, motorola
All products recommended by Engadget are selected by our editorial team, independent of our parent company. Some of our stories include affiliate links. If you buy something through one of these links, we may earn an affiliate commission.