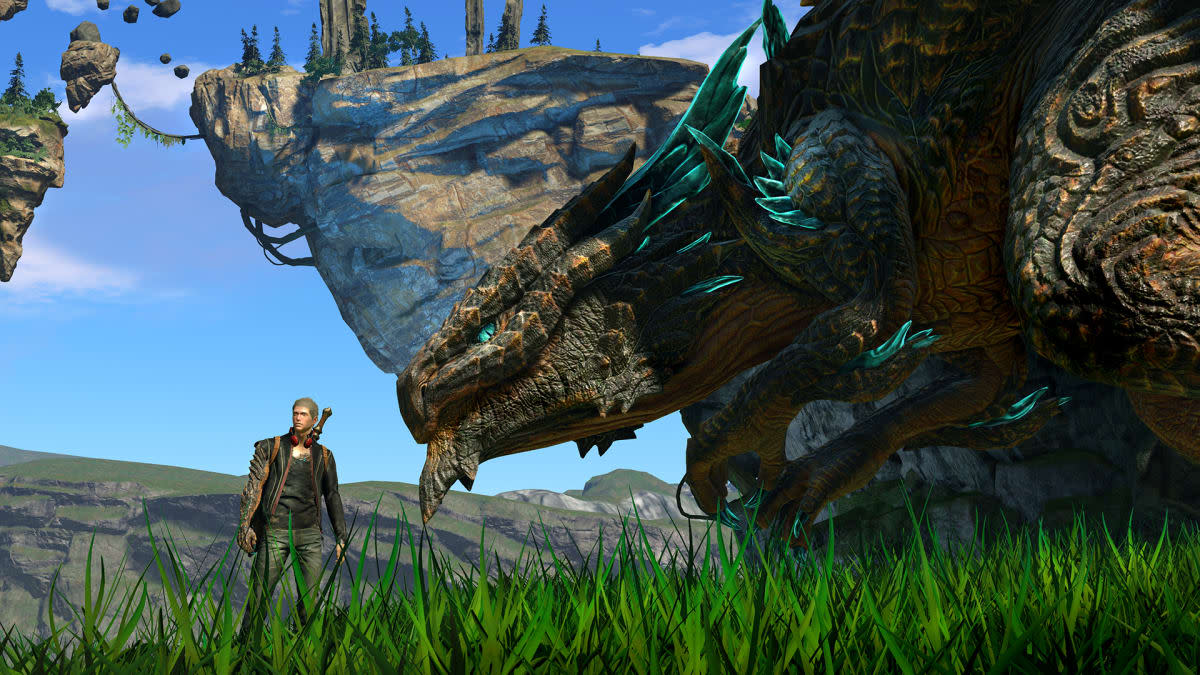 PlatinumGames is on a roll. The Japan-based studio is less than a decade old, but already it's put out a string of critically acclaimed titles such as Bayonetta, Vanquish and Metal Gear Rising: Revengeance. It's built a reputation on fast-paced action and deep, rewarding combat, and now it wants to prove it can deliver a compelling RPG experience too. Scalebound, the studio's Xbox One exclusive, is scheduled for release in 2016 and until recently, we've seen little of the game beyond a short CG teaser. At Gamescom, the studio revealed a glimpse of its gameplay and now, after watching an extended demo, I've decided Scalebound is the Xbox exclusive I'm most excited about.

A dude and his dragon

Studio co-founder Hideki Kamiya, speaking through a translator, walked me through the demo that was shown at Microsoft's press conference while another Platinum employee played the game. In Scalebound, you take on the role of Drew, a human from our world that's been transported to the mythical world of Draconis. Throughout the gameplay snippet, I was shown a series of floating islands filled with enormous beasts Drew will likely have to battle. Our hero would be no match for these foes on his own, but luckily he's befriended a mighty dragon called Thuban. While the player attacks with Drew, wielding a short sword to cut through swathes of armored knights, Thuban fights independently. An almost unstoppable force of nature, Thuban stamps the ground to create shockwaves and drenches his foes in flame.

It's just so pretty It can't be stressed enough: Scalebound is a beautiful game. Thuban's scales shimmer in the sunlight and blades of grass are whipped into the air whenever a blue arc erupts from the edge of your sword. A smattering of islands can be seen in the distance, with giant waterfalls cascading down their sides and into the empty sky below. It's not quite as colorful or bombastic as The Wonderful 101, but the artistic vision is strikingly realized. Draconis is a detailed world just begging to be explored on top of a flying dragon.

The Platinum employee running through the demo was keen to throw in some extra moves and abilities that weren't shown at the public briefing. One of which is a ranged magic attack called "pulse shots." These erupt from Drew's right hand and cause considerable damage to the monsters on the islands. Kamiya explained that pulse is also the energy source that shapes the world and enables Drew to absorb gems from his defeated enemies.

OMG, your dragon can wear armor These gems are pretty important, as they can be used to customize your dragon later in the game. In a special sizzle reel, Platinum showed off some alternate skin tones and elements, such as ice, that Thuban can use to vanquish his foes. You'll even be able to cover his scales in armor and, according to one ambiguous slide, customize "your dragon's very life." The shot in question appeared to show Drew extracting pulse from a dying dragon -- perhaps hinting that you'll be able to re-roll his stats or train multiple creatures in the game.

Collecting gems comes with a catch -- they can only be absorbed by Drew, specifically after he's landed a finishing blow. As a result, you'll need to weigh up exactly when and how to call upon Thuban. In combat, Drew can give his partner various hints and suggestions to help them win the day. The commands fall into one of two categories: attack and retreat, with the former broken down into multiple levels. "It's either attack, stronger attack or even stronger attack," Kamiya explained. The trick is to whittle your opponent's health down with Thuban before crushing them yourself. Heavy attacks offer the most damage, but an overzealous dragon could destroy them before you have the chance to harvest any gems.

Your strategies are dependent on Thuban's cooperation, which is far from guaranteed. "It's a balance about how you guys can work together in a clever manner," Kamiya said. "Just because you give out orders doesn't mean they always work. You're going to have to give it a few tries and sometimes you'll fail." Drew and Thuban are both headstrong characters, so their relationship will start with a few rough patches. But that bond will grow over the course of the game, changing both the narrative and the abilities at your disposal. Platinum is staying tight-lipped about the specifics, but has hinted that it'll be much more than just stronger attacks. "It's a much wider evolution than that," one employee hinted.

In combat, Platinum's legacy from titles like Bayonetta is clearly on display. Drew has a bevy of combos at his disposal and later in the game, you'll gain access to other weapons including spears and two-handed longswords. Down in the bottom left-hand corner, you can see a couple of quick menus that let you switch to secondary weapons and other items. These hint at the larger RPG elements that Platinum wants to weave into the game. Weapons will have different levels of durability and you'll need to carefully manage your inventory. "This is not a straight-up action game; it's an action RPG," Kamiya said. "We want you to play for a longer time, in different settings, and in a different type of world." Later in the demo -- set after the point where this year's Gamescom trailer ends -- Drew and Thuban become separated in a tight, gloomy cavern. In these sections, you'll need to be able to handle different enemies without your dragon's assistance. Here, an aggressive play style is recommended in order to avoid heavy damage and harvest the maximum number of gems. The pair's split is only momentary, however, as they're quickly reunited to open the door to a large dungeon -- this is the point where the new trailer catches up, revealing Scalebound's four-player co-op feature for the first time.

Yes, it has co-op too

Kamiya wasn't prepared to talk about the multiplayer in greater detail. As the game is due out in holiday 2016, it's no surprise Platinum wants to save some announcements for the coming months. Regardless, what was shown at Gamescom this year left a great impression on me. Platinum is a top-tier studio -- even Nintendo has recruited them to work on Star Fox Zero for the Wii U -- and I'm excited to see more of Scalebound. Dragons aren't particularly novel, but the studio's take on the legendary beasts feels fresh and unique. For now, it's enough to put the game at the top of my list of "most wanted Xbox One games." Given the roster of exclusives Microsoft is building up at the moment, that's no mean feat.

We're live from Cologne, Germany, for Gamescom 2015. Click here to catch up with all the news from the show.

In this article: gamescom, gamescom-2015, gamescom2015, hdpostcross, impressions, microsoft, platinumgames, preview, Scalebound, xbox, xboxone
All products recommended by Engadget are selected by our editorial team, independent of our parent company. Some of our stories include affiliate links. If you buy something through one of these links, we may earn an affiliate commission.