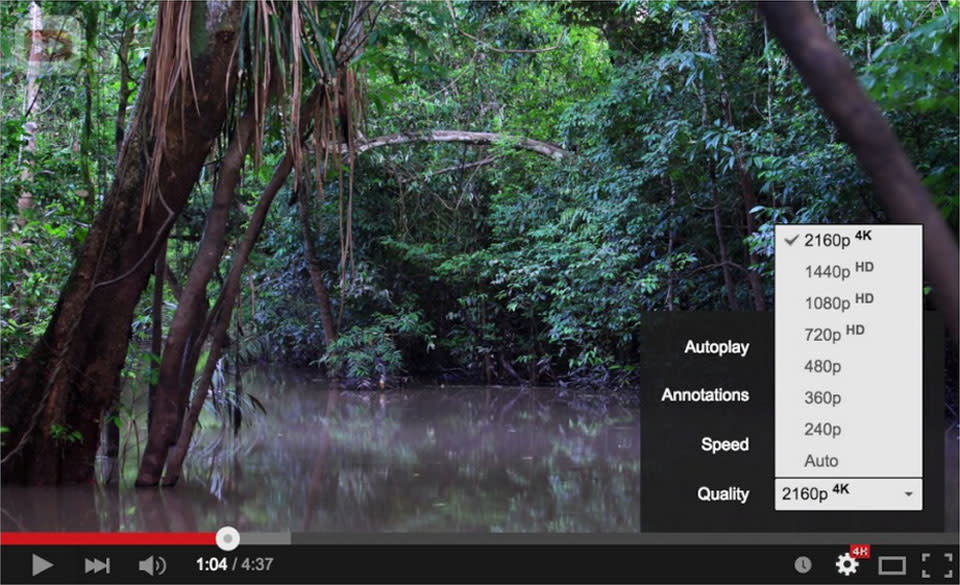 Ultra HD 4K video is still in its infancy, but there's no doubt the format will become increasingly popular in the next year or two. Huge players like YouTube and Netflix already support it, but delivering such high bandwidth video content remains a challenge. Google's trying to do its part to solve that problem by developing a more efficient video compression codec called VP10. The new codec has been in the works for nearly a year, but the company gave some details about how effective it can be over the VP9 format it'll eventually replace. In an interview with CNET, Google product manager James Bankoski said that VP9 uses half the bandwidth needed to deliver the same quality video as the popular H.264 format -- and with VP10, the company is trying to cut it in half again.

Reduced bandwidth usage isn't the only thing VP10 has going for it -- it should also provide sharper images, better color, and a better dynamic range between lights and dark. But despite some strong technical credentials and the backing of Google, widespread adoption of VP10 is hardly a foregone conclusion. H.264 is still the dominant video compression standard, and its successor (HEVC / H.265) will likely see widespread support.

Still, this is a battle that isn't yet won, and the dominance of YouTube means that VP10 will have a fighting chance against HEVC. The fact that VP10 is open source is another point in its favor; the licensing for HEVC could add red tape and costs for developers and devices makers. It'll be a while before this conflict comes to a head, however: Google said it hopes to hit its performance targets for VP10 by the end of next year.

In this article: 4k, google, h264, h265, hdpostcross, hevc, vp10, vp9, youtube
All products recommended by Engadget are selected by our editorial team, independent of our parent company. Some of our stories include affiliate links. If you buy something through one of these links, we may earn an affiliate commission.