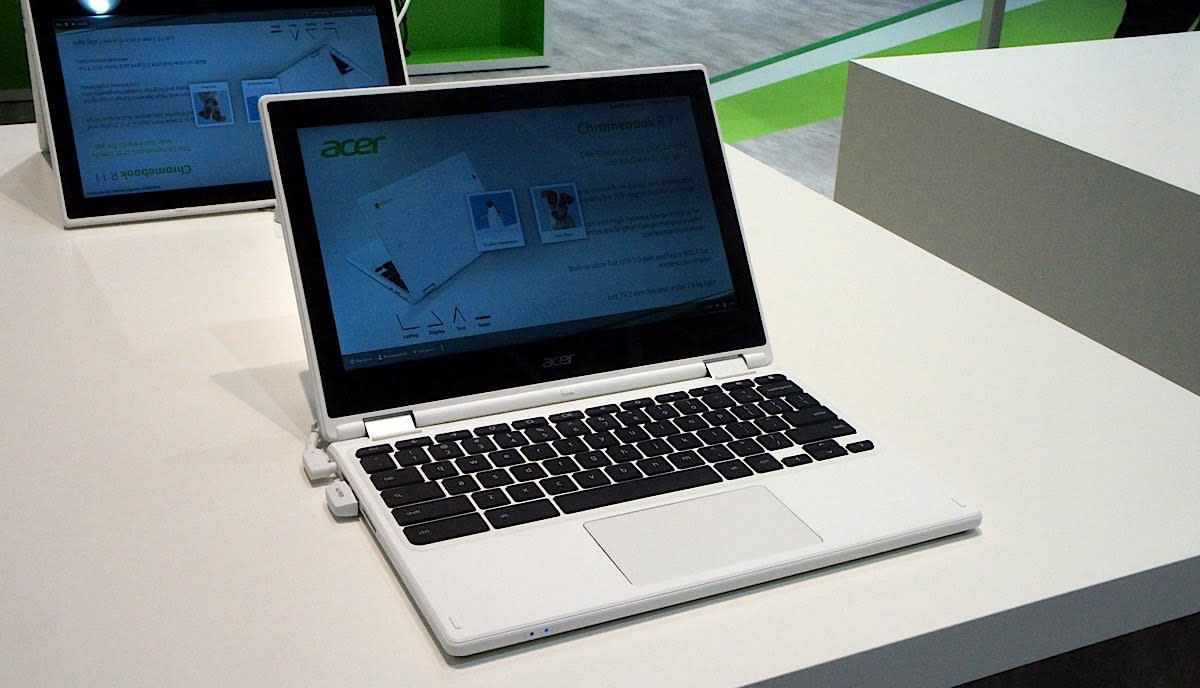 Acer has announced the Chromebook R11, the company's first Chrome OS-running device that comes with a 360-degree rotating hinge, as made famous by Lenovo's Yoga. Your eyes will be staring into an 11.6-inch 1,366 x 768 touchscreen, while below the keyboard you'll find an Intel Celeron processor paired with 4GB RAM and 32GB storage. Connectivity-wise, there's dual-band MIMO 802.11ac WiFi, as well as a single ultra-fast USB 3.0 port. The headline feature, really, is the ability to turn that screen whichever way you choose to enable one of four modes: laptop, tablet, tent or display, much like the ASUS Chromebook Flip. It shouldn't surprise anyone to know that Chromebooks are so standardized now that it's not as if anyone's going to be seeing huge differences between two models. What we can say about the R11, however, is that the keyboard has a large amount of depth for such a low-cost device and the trackpad is pleasingly accurate. The keys also have a polite clickiness to them which makes you feel like the hardware's much more expensive than it actually is. Design-wise, the company has chamfered off all of the edges to create a stark, yet elegant piece of hardware that's very pretty from certain angles. In addition, the company is hoping that the nano-aluminum coating will bolster the device's WiFi performance to mark it ahead of some of its rivals. The R11 launches in North America this October with a starting price of $299, while Europe, Middle East and Africa will get hold of the gear in November — so long as they've got €299 in their back pocket.

In this article: 360Hinge, acer, Chromebook, ChromebookR11, Flip, google, hands-on, ifa, ifa2015, R11
All products recommended by Engadget are selected by our editorial team, independent of our parent company. Some of our stories include affiliate links. If you buy something through one of these links, we may earn an affiliate commission.