Daily Roundup: Robot love, the state of VR and more! 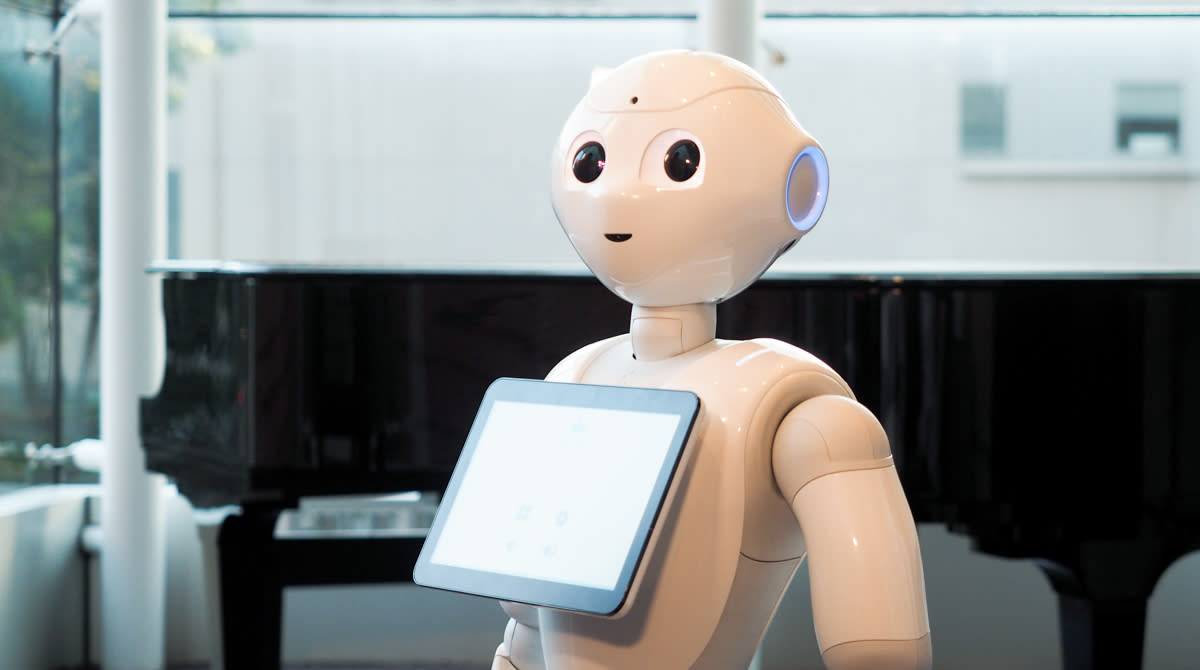 The robot revolution is coming. But instead of death machines dragging us off to work in their plutonium mines, we'll get helpful little friends like Pepper from SoftBank and Aldebaran. The little bot was built to be a friendly and helpful companion in stores and homes. It reacts to your emotions, offers hugs and high-fives and answers at least some of your questions. In fact, the demand for Pepper is so high that the first 1,000 units available in Japan sold out in a minute. But after sitting down with it for a quick interview, it's apparent that you shouldn't fire up the credit card for a domestic android just yet. While it's programmed to be charming and witty, there are still some bugs that need to be worked out. Right now, talking to Pepper is a little like talking to a two-year-old that's been handed four Red Bulls and a box of chocolate.

When I did sit down with the off-white tiny robo-person, I didn't expect much. An automaton that's been hawking phones in SoftBank stores strikes me more as a rolling kiosk than a home companion. A silicon salesperson with creepy, dead eyes that's programmed to tell me about the weather, bring me a soda and read my emails. To my surprise the robot won me over even though I was never offered a refreshing beverage.

Oh, and those eyes? There was a slight twinkle of a camera in those dark blobs that made it less intimidating. Surrounding the sockets are translucent borders that glow to indicate Pepper's current status: green when it's listening, blue when it's thinking. The expressionless face was created to evoke empathy, but it takes more than industrial design to win a person over. There's a charm to how the robot reacts to you and begs for your attention. Of course, like a toddler, it also stops paying attention to you and does what it wants, but that's part of what makes kids fun to be around. With its pre-programmed jokes, voice of a youngster and attempts to discern and react to your emotions, it evokes a simulated sense of humanity. It's all a complete scam and I fell for it.

That deception is what will make the home robot a reality. The assistant that will eventually help you clean the house or lend a hand when you get older needs to be friendly and appear to care about your well-being. There needs to be an actual social bond. Sure, it's fake friendly, but to be honest most of our friends are probably fake friendly. At least Pepper won't borrow money then ignore your texts.

But all that charm won't make up for the fact that Pepper isn't ready for your home. Like other potential companion robots, it gets easily confused. During our "conversation" it would sometimes just start asking me if I wanted to learn about cloud computing or share weird information like how tall I am compared to Abraham Lincoln. To be fair, some of the reason it started bringing up random topics is that the current iteration is tuned for dealing with people in a busy store. Unless you're standing directly in front of Pepper, it's difficult for it to see or hear you.

Still, I felt like I was talking to someone with a short attention span that would irregularly shout out random bits of trivia.

Maybe one day it'll grow up and you'll be fine letting a chunk of wires and plastic take care of the house. In the bot-friendly future, your robot will throw out the trash and remind you to pay the electric bill. When you're elderly and you need a little extra help around your home, it'll clean your bathtub and make your dinner. It'll know when you're sad and you need to watch your favorite comedy, or listen to that Bruce Springsteen song that always cheers you up. Its charms won't feel dated because it'll watch and analyze you and nightly software updates will feed it important data from your doctor and job. More importantly, Pepper won't get tired of you or your jokes. It'll listen to you, just like a real friend.

In this article: AldebaranRobotics, Pepper, SoftBank
All products recommended by Engadget are selected by our editorial team, independent of our parent company. Some of our stories include affiliate links. If you buy something through one of these links, we may earn an affiliate commission.