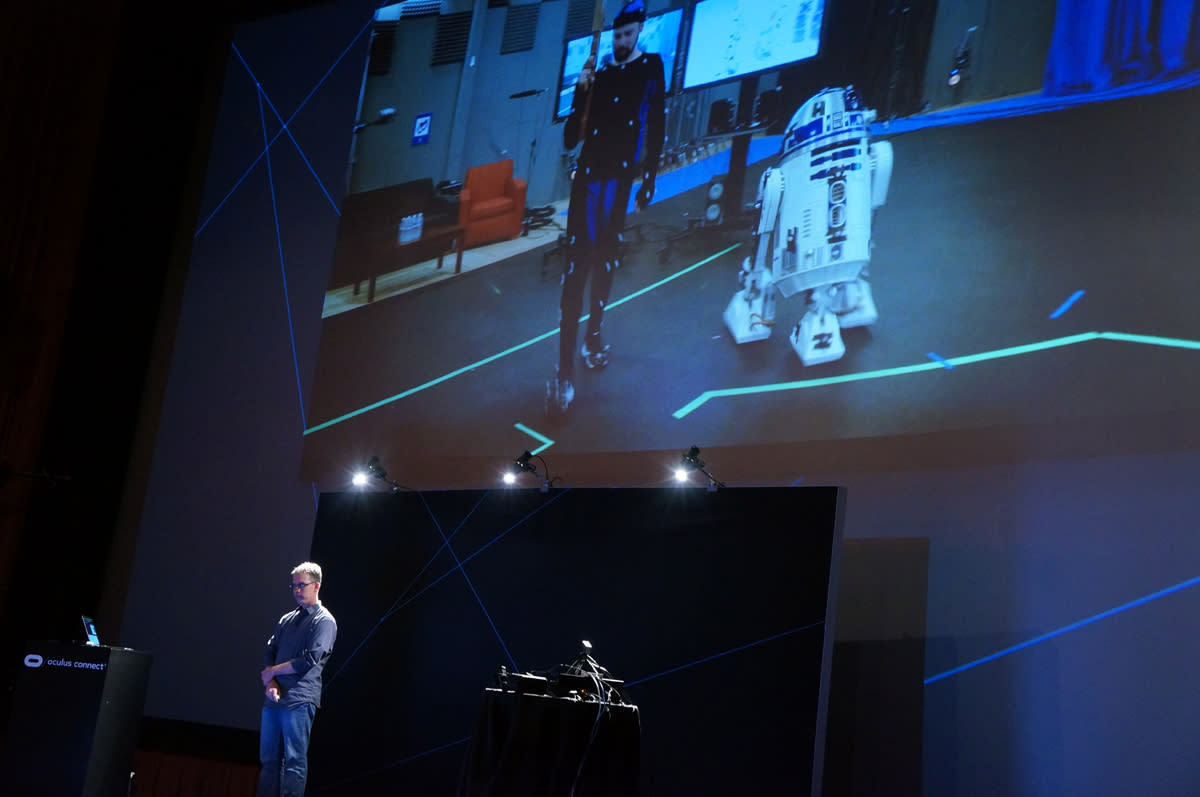 Whether you're familiar with the studio's name or not, you've definitely been touched (and likely gobsmacked) by the computer-generated imagery in one of the blockbuster films to get the Industrial Light and Magic treatment. From Jurassic Park (and its sequels) to the upcoming Disney-backed Star Wars films, the Lucasfilm-run powerhouse is one of the more visible and transformative visual effects forces in entertainment. Now, with a suite of virtual production tools, it's poised to change the way we experience not just film, but also storytelling with an iPad and a virtual reality headset.

The software powering this potential breakthrough in interactive entertainment is known as VScout, a pre-production tool that allows filmmakers to virtually scout locations. At Oculus' developer conference in Los Angeles, Rob Bredow, VP of New Media at ILM and head of its recently created ILMxLAB, demoed the new software with a short scene set in the Star Wars universe. Using the available set of tools, one of Lucasfilm's software engineers, Darby Johnston, was able to tweak the camera's focus, focal length, crane height and lens used. Simply tapping on an object in the scene had the camera pan in for a close-up. It's impressive stuff considering it all gets rendered in real time in the cloud and then streamed to an iPad.

"You can run this anywhere you run Netflix. It's basically the same bandwidth requirement," said Bredow. While VScout's pre-production merits are likely a boon to creatives in the entertainment industry, its most compelling aspect is how it could empower consumers and change the way we create interactive experiences. Using a Star Wars short as an example, Bredow demonstrated how viewers could use the software to go from watching a letterboxed version to adjusting camera angles -- going from behind a stormtrooper's head to being inside of it -- or even deserting the main storyline altogether and following secondary characters' narratives. To that latter point, Bredow replayed the "linear" scene, but instead of watching the stormtrooper, he tagged along with C-3PO and R2-D2, following them into a hut where they spoke with a Princess Leia hologram. Keep in mind, the main story is still playing out while this all occurs.

"What if you were shooting movies like this?" Bredow asked the rapt crowd of developers.

Of course, this being a VR-focused event, Bredow even showed off a Rift demo that lets viewers fly the speeder bike around the desert and through AT-ATs.

Clearly, it's early days for VScout and Bredow admitted as much, saying that the studio's still experimenting to find the proper way to construct an experience with so many available narratives. In fact, it's not even a given that ILMxLAB will even make this software available to consumers. Though given the impressive demo, it's not far-fetched either. In this article: hdpostcross, ILM, IndustrialLightAndMagic, ipad, Lucasfilm, OculusConnect2, StarWars, virtualreality, VR
All products recommended by Engadget are selected by our editorial team, independent of our parent company. Some of our stories include affiliate links. If you buy something through one of these links, we may earn an affiliate commission.