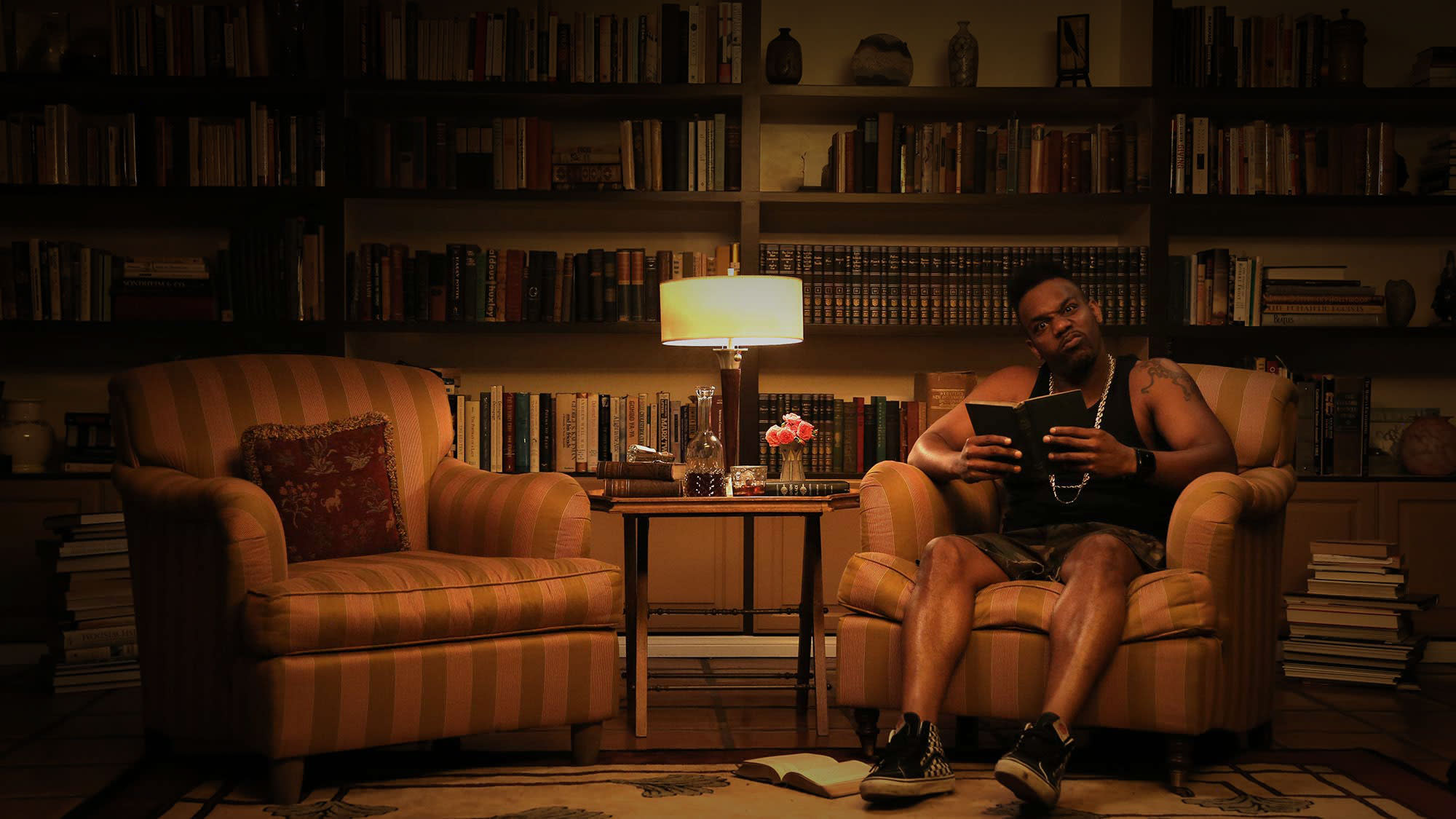 Not long ago, whenever a teacher would assign a book report, most students would sprint to Barnes & Noble to grab the CliffsNotes version that could save their weekend. These days, however, they're more likely to head to YouTube to listen to the wise words of Dr. Sparky Sweets, PhD. He's the star of Thug Notes, a show that explores classical literature in a language you won't find coming out of your teacher's mouth. It's become such a success that the channel behind it, Wisecrack, has more than half a million subscribers and has its sights set on becoming an internet behemoth. Thug Notes' cultural impact is growing too, since it's now being used in public schools and an accompanying book was recently published. We went to find out how this weird mix of comedy and education became so successful.

Wisecrack's story began when Jacob S. Salamon met co-founder Jared Bauer as students at the University of Texas at Austin in 2006. Their paths shouldn't have crossed, since Salamon was a business major and Bauer was at film school, but they shared a love of astronomy. "We were both Jewish Texans, immediately fishes out of water, but both smart guys with a passion for entertainment," says Salamon. Their friendship would continue through their time at the university and, as they were graduating, Salamon says that he "made a pinkie promise" to reconnect with Bauer once he'd scored big in the tech industry. It would be seven years before the pair met again, since Salamon went to work for tech startup Bazaarvoice, cashing out his stock options when the company went public in 2012. It was then that they reunited, moving to LA in the hope of becoming Hollywood big shots.

Breaking into the film business proved difficult, so Salamon decided to produce a "calling card" series to generate some attention from the executives. That show was 2012's Bubala Please, a YouTube sitcom where two LA gangsters explain how to navigate the nuances of Jewish culture. One episode, for instance, provided the best latkes recipe (a sort of potato pancake), the right gifts to bring for game day and even how to conduct your own "Gangsta Bris." The show turned out to be a modest success, with individual episodes gaining between 30,000 and 800,000 views.

"YouTube did a survey, and they took Thug Notes into 100 classrooms with 1,100 students around the world and it was overwhelmingly positive."

Having tackled their shared Judaism, Bauer expressed a desire to combine his love of classic literature and comedy. The idea would eventually develop into Thug Notes, starring comedian Greg Edwards as Sparky Sweets PhD, the "smartest man in the universe." The pair decided to shoot four episodes in a day, with Crime and Punishment being the first to be released. The set was rounded out with some of the most assigned books in US public schools: including The Great Gatsby, Lord of the Flies and To Kill a Mockingbird. Each episode bombed, much to the duo's horror, and, so they decided that maybe the dream of making it in Hollywood was over.

But their fortunes suddenly changed when a Reddit user stumbled upon one of the clips. As Salamon tells it, "Nobody watched them, for weeks, and then suddenly I looked at my phone and we had 5,000 subscribers." The video for To Kill a Mockingbird had made Reddit's front page, and within two days the channel had 30,000 people signed up for new clips. The internet's hive mind had deemed Thug Notes was worth saving, but there was still a hurdle to leap over before the show could continue: funding. Salamon's finances had dwindled to the point where he could no longer bankroll his own attempts at becoming a big shot. YouTube, however, pulled the pair into a meeting to tell them that they had, almost inadvertently, launched the "fastest growing educational channel," and that they shouldn't give up. As such, Salamon and Bauer set up Wisecrack as less of a comedy studio and more of a tech startup, seeking investment from outsiders to help fund their growth. Part of the plan was to branch out from just making Thug Notes, and so the firm launched 8-Bit Philosophy, a mash-up of philosophy and gaming culture, which, for example, used a gaming icon like Zelda to explain Plato's Allegory of the Cave.

Wisecrack was beginning to grow, and Bauer, a self-described "film major and pretentious bastard" wanted to do something relating to cinema. The result was Earthling Cinema, in which movies are analyzed by an "alien," Garyx Wormuloid (UCB LA's Mark Schroeder), centuries after the planet has been destroyed. The series was a slow burn, something that Salamon puts at the feet of YouTube's opaque algorithms. "We started with the movies that were sorta canon, like Fight Club, Pulp Fiction and 2001 and it was our worst performing show," he says. "I thought, 'This is so great. Why isn't it working?'"

The secret to success, Salamon realized, was in how the show was marketed. "We started to tweak the messaging, so it said: 'An alien analyzes movies,' but nobody watched it. Then we did '2001 through Alien Eyes' and nobody gave a shit. It was only when we used the phrase 'the hidden meaning' and people latched onto that. And it's those little tweaks that make a successful and an unsuccessful show."

Earthling Cinema's growing success encouraged the company to broaden the sort of channels that it offered to users. Earlier this year, Wisecrack launched Boss Bitches of History, a show created by and starring adult actresses Sovereign Syre and Ela Darling. In it, the pair recounts tales of prominent women throughout the ages that made their name for pushing back against the prevailing culture. The series' first two episodes were released simultaneously, featuring stories about Cleopatra and Marie-Joseph Angelique. According to Salamon, it was Wisecrack's "most successful series launch to date." Unfortunately, the critical reception wasn't particularly warm and those episodes garnered nearly 1,000 dislikes -- something that can kill a channel's standing with YouTube's secret-sauce algorithms.

The premise was seen as preachy and the performers, two women, came under criticism. "Typically our videos get 99 percent approval, but these got closer to 75, which is shockingly low," he adds. Even an 8-Bit Philosophy episode that tackled the topic of gender received significant backlash. As far as Salamon's concerned, it's all about crafting shows that are a fit for the channel's core demographic. "Because our audience is 80 percent male; 80 percent 18 to 34, [this sort of content] just doesn't work for them." Another issue Salamon identified was in how Boss Bitches of History was presented to the internet. "We were being subtle that they were porn stars," he says of the social satire that was lost on audiences. "I didn't want to exploit them in that way."

Wisecrack is currently doing its best to fix the show in a way that'll make it more palatable to its male-dominated audience, while preserving the core concept. At the same time, they're looking into broadening Earthling Cinema to cover other aspects of the arts, for instance Earthling Television. The scope may broaden, but it will maintain the philosophy of alternating between discussing "serious" works of filmmaking and more commercial-friendly fare. Salamon likens it to candy and vegetables: "'Candy' is the shit that everyone loves, like Frozen and Batman, and then there's 'Vegetables,' which are the movies and books that we think are important." The aim is two-fold: Help the channel pull in enough ratings to survive, while bringing higher-brow materials to those who may otherwise miss it. Another thing the channel has had to fight is the idea that it's not trading in stereotypes, especially concerning Sparky Sweets, PhD, himself, the eponymous "Thug" of Thug Notes. With his do-rag, T-shirt and chains, it would be easy to say that it's a portrayal that's inappropriate, especially given that its creators are both Caucasian. "From the get-go, we wanted to use social satire and this character as a way of saying: 'Don't judge a book by its cover,'" says Salamon. It's less of an issue now that the show has been featured on BET, but the suggestion that Thug Notes is somehow racist is one that clearly irks him. "I can name a handful of pretentious academics who found it offensive because they didn't listen to the analysis."

Cast your mind back to high school and you may remember being warned not to base your book report on the CliffsNotes version, or worse, the movie adaptation you watched half-asleep. The burning question then, is what do teachers think about Wisecrack's Thug Notes? "We worked with a researcher to take Thug Notes into 100 classrooms with 1,100 students around the world ... and it was overwhelmingly positive," says Salamon. The stats make a compelling case for the series: Nine out of 10 students asked by YouTube said their enjoyment of English classes has improved with the introduction of Thug Notes into the classroom.

Salamon's pragmatic about the fact that, when presented with something taxing like a book report, "kids are gonna cheat anyway." But still the series' positive impact cannot be overlooked; it has been praised by both students and teachers, alike. Wisecrack's email account frequently receives missives from people who've just about finished high school and, thanks to Thug Notes, have now developed an interest in reading. Then there's the feedback from teachers themselves, who write in to say that the students have been unengaged with the reading material until they see the show, which acts as a sort of icebreaker.

Despite being the co-founder of one of YouTube's most popular educational channels with more than half a million subscribers, Salamon doesn't feel as if he's made it. His ambitions are far grander than just making some web (and TV) shows. As he sees it, the success of shows like The Colbert Report and Last Week Tonight with John Oliver make it clear that people want smarter, more in-depth entertainment. But starting a similar news-based satire show isn't on the cards for Wisecrack just yet, since the current plan is to grow the brand beyond just making video clips.

The recently published Thug Notes book is only the first step in this expansion, but there's plenty more real-world items planned for the future. Salamon's grand vision for Wisecrack is to create a subscription-style service "like Lootcrate, where you get a cool product from us every quarter," and early access to new series' episodes. He's not there yet, but if all of these various bets pay off, Wisecrack could end up being just as ubiquitous for educational material as Lonely Planet is for travel.

Image credits: Jacob. S Salamon / Wisecrack
In this article: 8BitPhilosophy, BossBitchesofHistory, EarthlingCinema, google, hdpostcross, JacobSalamon, ThugNotes, video, Wisecrack, YouTube
All products recommended by Engadget are selected by our editorial team, independent of our parent company. Some of our stories include affiliate links. If you buy something through one of these links, we may earn an affiliate commission.