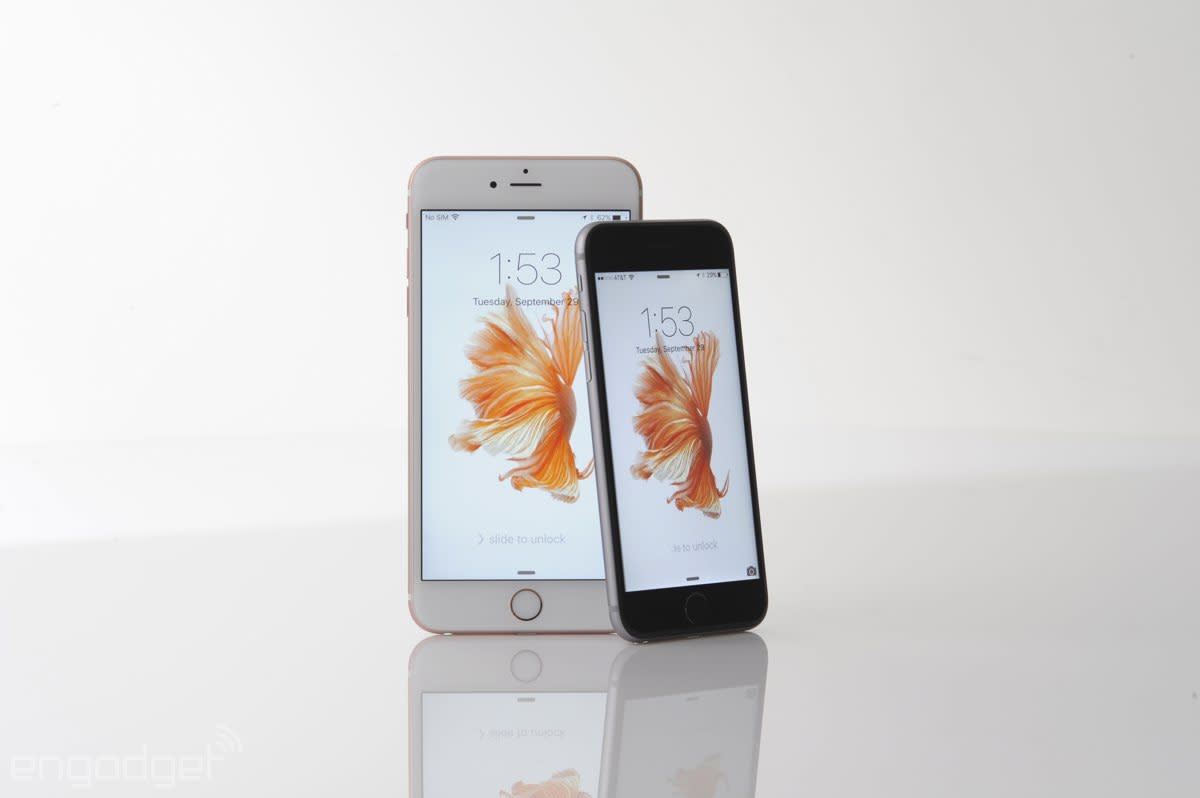 The iPhone 6s and 6s Plus aren't going to wow you with a new design -- that's not the point of Apple's 's' phones. Instead, they offer a lot of under-the-hood updates, including a faster processor, better cameras and the addition of a pressure-sensitive 3D Touch, leading our reviewer Chris Velazco to call the two phones "more than just a modest refresh." Now that many of our readers have gotten their mitts on one, we've taken a look at the user reviews to find out if the 6s and 6s Plus truly constitute a "worthy upgrade."

The knowledge that 6s and 6 Plus weren't getting a redesign didn't stop some users from commenting on the phones' looks, with Cjp1967 calling his 6s Plus beautiful, adding that the only thing he disliked were the lines on the back. RadioSuicide appreciated how narrow their 6s was, which made it easier for them to use in one hand. However, Remeng lamented the ever-increasing size of screens, saying they would trade in their current device "in a heartbeat" for something they can hold with one hand.

While users like kingoftowns found the smaller size of the 6s more accessible, quite a few have embraced the 6s Plus' larger footprint. RajaHood says it offers "plenty of room for viewing webpages or playing games" and, even if the top corner is hard to reach, it's worth it for the added screen real estate. Griffinalex even found that the 6s Plus "makes it possible for me to ditch my iPad mini."

"3D Touch at this point is fairly limited, and I occasionally forget to take advantage of it." -- RajaHood

Regardless of the size, users were enamored of the screen quality, with Cjp1967 calling it "bright and crystal clear" while gigathlete noted its natural colors. Mattster19901 found his particularly great for watching 4K video. Of course, the most notable improvement in the screens isn't how they look, but the addition of 3D Touch. Still, while Cjp1967 says the feature is easy enough to learn, other users were more critical of this new feature. Antoinele feels it was a mistake to sacrifice battery life for 3D Touch and RajaHood says the technology is "rather limited" right now. However, RadioSuicide thinks 3D Touch "will only get better" as more apps are updated to support it, and even RajaHood believes that "there will be a day when we wonder how we lived without it."

While 3D Touch earned mixed reviews, the improved Touch ID sensor went over a little better with users. Gigathlete calls its speed "insane" and RajaHood even found it a tad too quick, missing notifications because his device "unlocked faster than I could see what was on the screen." Touch ID wasn't the only thing to get faster, with Cjp1967 noting his phone "feels snappier," and dwpratt85 finds it "ridiculously fast." RajaHood observed that "web pages and apps refresh so much less frequently" thanks to the increase in RAM, and that the new A9 processor means it "works as fast as you do."

"Live Photos ... is really only good when the main subject of the photo is a person or animal." -- kingoftowns

The camera's also been upgraded, with iDroid noting that though it's not a Leica with a Carl Zeiss lens, the camera on his iPhone 6s Plus "does the job well enough for an enthusiast." However, kingoftowns thinks that the new Live Photos feature "feels gimmicky" and RajaHood says it doesn't do a good job of keeping up with his kids, missing parts of the action entirely. But Raja concedes it's nice for slower things, and r3alle agrees that it's great at capturing "little moments" like when his baby nephew is making faces. RajaHood did appreciate having optical image stabilization for taking videos on his 6s Plus, and griffinalex agrees that the video quality is excellent.

The only real negative to be found was that a few users were disappointed by the battery life on the 6s, with RadioSuicide calling it decent but "not great." That's a problem mitigated by getting a 6s Plus, which TxdoHawk says "will set you free" in terms of battery life if you're willing to "embrace the phablet." This falls in line with our own review, which called the 6s Plus "the best iPhone you can buy right now" if "you don't mind a bigger device." Cjp1967 agrees, saying of his 6s Plus that "all the hardware upgrades just made a great phone into an amazing phone," and RajaHood calls it "the best update to the iPhone since multi-touch."

In this article: apple, iphone, iphone6s, iphone6splus, mobilepostcross, reviewroundup, userreviewroundup
All products recommended by Engadget are selected by our editorial team, independent of our parent company. Some of our stories include affiliate links. If you buy something through one of these links, we may earn an affiliate commission.