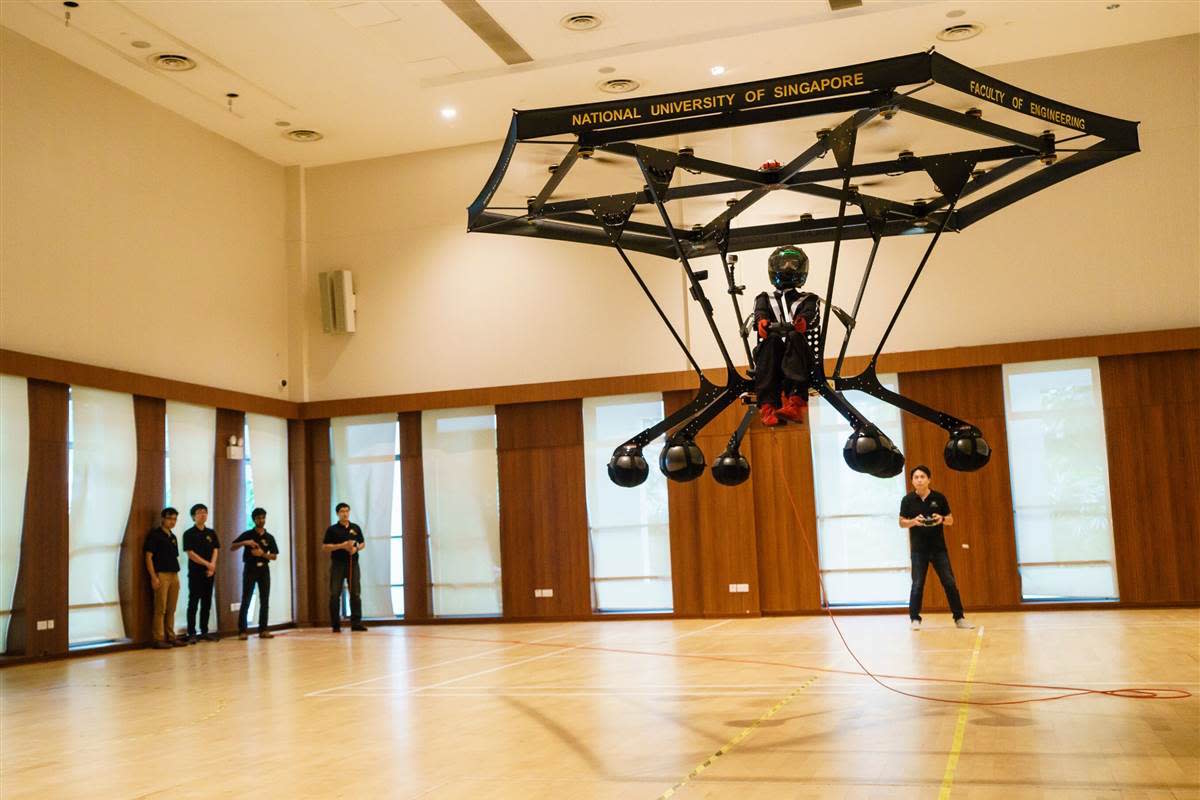 What you're looking at above is Snowstorm, a personal flying machine. This electric-powered aircraft, designed and built by a group of students from the National University of Singapore, can be controlled by a human pilot and is capable of a vertical takeoff and landing. Snowstorm was created as part of an engineering project called FW Air: Electric Aviation, which aims to turn the fantasy of flying cars into reality. Currently, the prototype is able to stay above ground for roughly five minutes at a time, while the flight control system lets the pilot adjust Snowstorm's thrust, pitch, roll and its swerve. "The toughest part of this engineering challenge was ensuring a good thrust to weight ratio to allow the craft to lift a person into the air," said Shawn Sim, a student involved with the program. "In some instances, we even 3D-printed parts, such as our landing gear mount, just so we can have a customized and optimal fit."

Of course, FW: AIR Electric Aviation isn't alone in trying to make our dreams of a flying car come true. Earlier this year, we saw an insane autonomous human transport project, and there are many others that are working toward that same goal.

BEHOLD! THE SNOWSTORM - Singapore's FIRST indoor personal flying machine! Designed and built by a team of NUS students, Snowstorm is an electric-powered aircraft capable of vertical take-off and landing that can be controlled by a pilot. This super cool project is part of FrogWorks, a collaboration between the NUS Faculty of Engineering's Design-Centric Programme and the NUS University Scholars Programme.Now your dreams of flight can become a reality... with your very own personal aircraft! Follow the SNOWSTORM project here, FW Air: Electric Aviation#NUSLife #NUSResearch

Posted by National University of Singapore on Wednesday, December 2, 2015

In this article: Aircraft, FlyingCar, FlyingCars, FlyingMachine, gear, NationalUniversityofSingapore, NUS, science, Singapore, Snowstorm, TL17FLYCR, tomorrow, transportation
All products recommended by Engadget are selected by our editorial team, independent of our parent company. Some of our stories include affiliate links. If you buy something through one of these links, we may earn an affiliate commission.