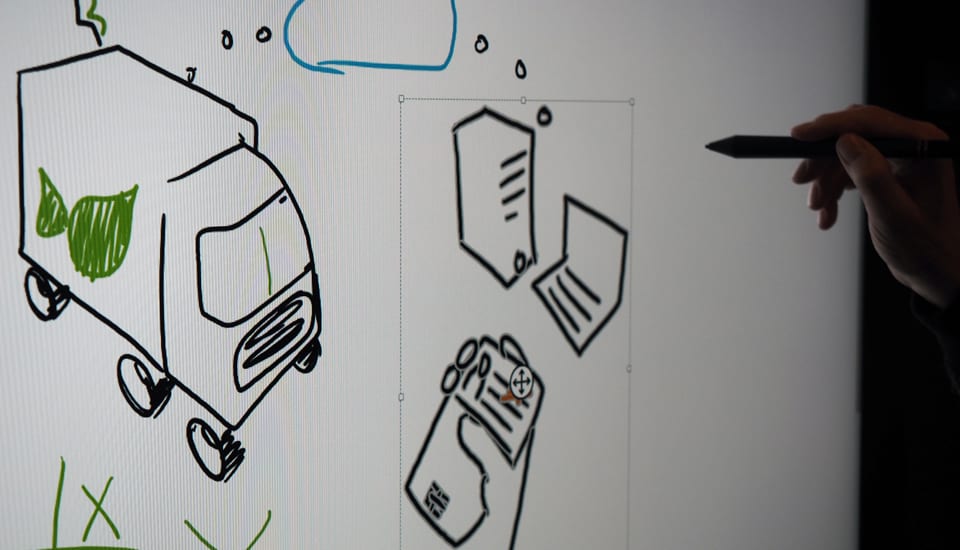 As Microsoft's big news day winds down, people will mostly be talking about two things: the next version of Windows, and that insane headset that lets you see holograms in your living room. If you ask me, though, one of the most impressive things the company announced was actually a giant pen display meant for the workplace. The Surface Hub, as it's called, is an 84-inch, 4K screen that's destined to live in conference rooms, making it easier for employees to brainstorm together, even over conference calls. Using a pressure-sensitive pen that attaches magnetically to the side of the machine, you can draw on the display, moving things with the stylus, and even erasing things using the opposite end.

In fact, as soon as you remove the pen from the side, a brainstorming app similar to OneNote automatically opens up. So, if you've ever wandered into your company's boardroom, unsure how to work the assortment of teleconferencing gear, you needn't fear here: If you can pick up the pen, you can get to work immediately. Best of all, you don't have to sign in, either. (You could reserve a Surface Hub the same way you'd reserve a conference room, at which point you can join your planned meeting, but you can also just show up and immediately start doodling if you're more spontaneous.) As a bonus, the pen charges through its magnetic cradle, but its battery life is purportedly long enough that you can leave it undocked for weeks at a time. Even when it does die, Microsoft says it can regain an hour's worth of use within just two minutes of charging. If only all gadgets worked that way.

As you're brainstorming, you can use the built-in Skype for Business to loop others in. Throughout, strategically placed cameras on the display create the illusion that you're speaking at eye level with the people on the other line, making the whole experience feel more intimate than perhaps it really is. If you're presenting, you can hook up to the display using a wired connection, which opens the door not just for Windows PCs, then, but Macs too. Similarly, you can connect wirelessly with any Miracast-enabled device, which means this setup will play nice with many Android phones and tablets as well. What I especially like is that if you're using a Windows 10 machine, you can actually send marked-up images back to that device, even after you used the Surface Hub to draw on it.

Speaking of the sort, though many of the demos I saw today involved that OneNote-like brainstorming app, the Surface Hub is, at its heart, a Windows 10 PC. That means it can display any universal app that you'd otherwise use on a traditional laptop or desktop. So, if a team of designers wants to open up a 3D modeling app and spin their latest prototype around, they can do that. Ditto for doctors looking at medical diagrams, or architects looking at maps. Nice to know this isn't just some expensive, oversized notepad.

The one thing that makes me hesitant to call this a true all-in-one computer: It's not designed to save any of your data locally. After you're done using it, you can enter an email address where the machine can send all the notes you created during your brainstorming session. If it was a planned meeting, with a list of Skype attendees, everyone on that list will receive the notes automatically. Either way, once you close out of a meeting, the Surface Hub sends out the minutes -- and then wipes them from the device, cleaning it up for the next meeting. No word yet on when this will arrive, or how much it will cost, but I think I want one. Maybe not for my apartment, but for my parent company AOL's conference rooms. Please, guys?

In this article: hands-on, microsoft, microsoftsurfacehub, surface, surfacehub, uk-feature, windows10, windows10event2015
All products recommended by Engadget are selected by our editorial team, independent of our parent company. Some of our stories include affiliate links. If you buy something through one of these links, we may earn an affiliate commission.