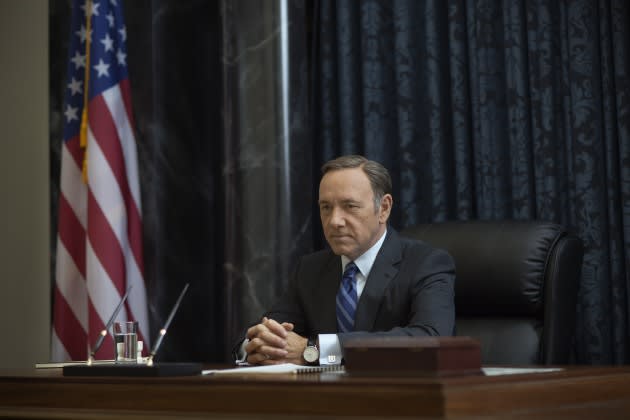 Despite all the "Netflix original" branding plastered over shows like House of Cards, it's not technically Netflix's content. That's a big reason why you've had access to some of it through TV providers, and even Amazon. The streaming giant plans to change that shortly, though. Netflix's Reed Hastings tells Bloomberg that his company will soon be "taking on ownership and production" for original programming. The move will expose Netflix to more risk if there's a flop, but it'll give the service much more control over where its content is available (hint: probably not at Amazon). And if Netflix does license anything, it'll get a proper cut of the action.

The executive isn't saying which productions will be completely in-house, although Bloomberg suggests that one might include Flaked, a Will Arnett comedy expected in 2016. Whatever happens, it's clear that Hastings and crew want to compete more directly with the likes of HBO, which also owns the bulk of its shows. Netflix wants to have true exclusives and otherwise reduce its dependence on material that could vanish in a heartbeat.

Source: Bloomberg
In this article: hdpostcross, internet, netflix, streaming, television, tv
All products recommended by Engadget are selected by our editorial team, independent of our parent company. Some of our stories include affiliate links. If you buy something through one of these links, we may earn an affiliate commission.