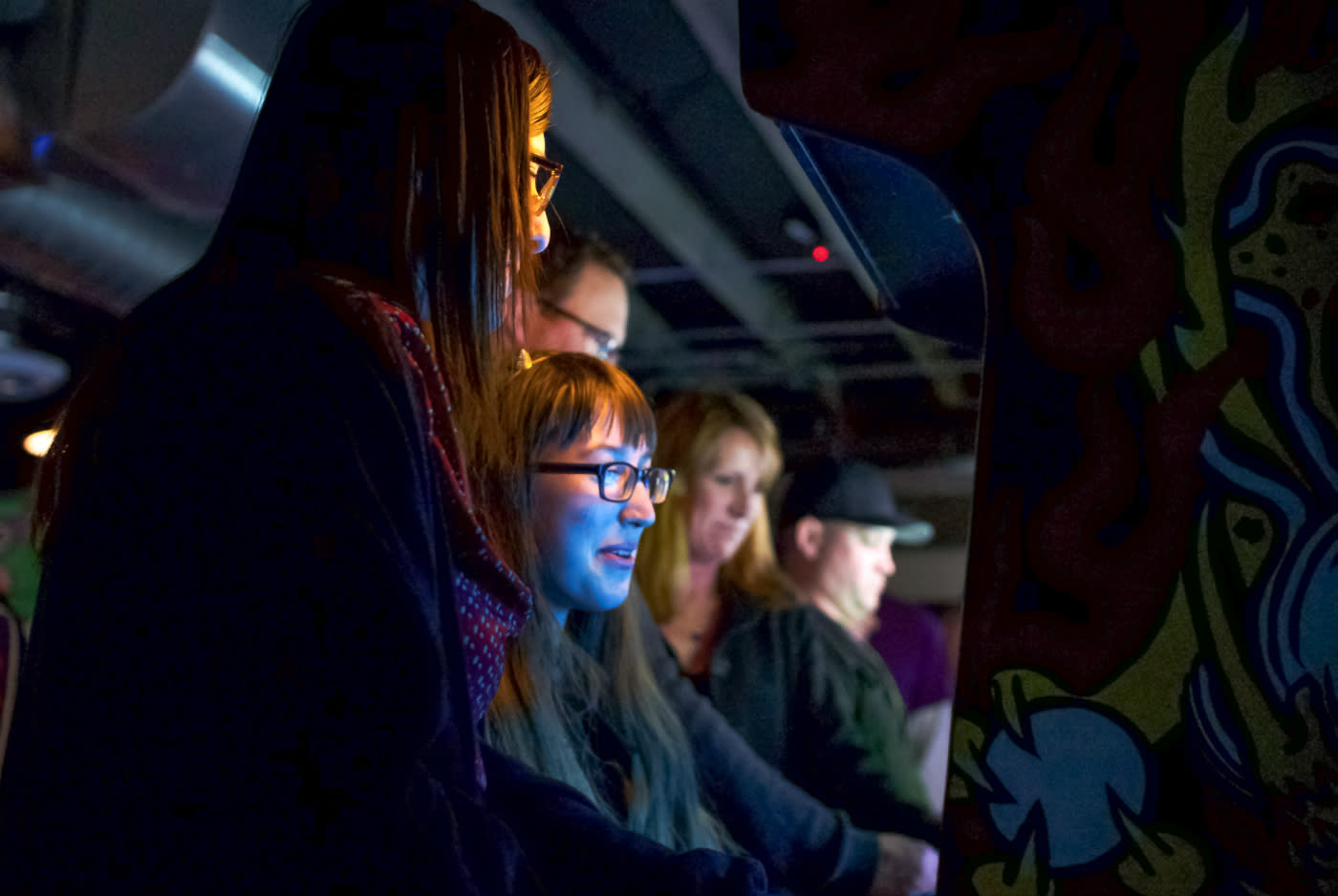 Building community through arcades and beer

Arcade bars are more common than ever, but can they be more than a fad?

It's springtime in downtown Phoenix, and Cobra Arcade Bar is open for business. Wednesday afternoon sunlight spills through two massive open windows at the front of the bar, illuminating silver tap handles, neon-splattered paintings from local artists and shiny black booths. Organizers from a nearby business set up shop on the front patio, preparing for a company event. Even in the middle of a weekday, Cobra hums with activity.

It also beeps, pings and pows. Roughly 40 arcade games hug every wall and spill into the open space on one side of the bar, blinking and begging to be played. They're old, but clean and in full working order. Kids these days would probably call them "vintage."

Cobra has all the bells and whistles of a traditional bar, including signature cocktails, flat-screen TVs and DJs on busy nights. That's part of the secret to running a successful arcade bar in 2016 -- start with a solid foundation. The bar can't rely on games alone, Cobra co-owner Nico Paredes says.

"Think about how popular arcades were in the '80s and '90s," he says. "They died out because, I think, they didn't have a model that grew with the players. That's what we're offering. It's a model that grows, and it actually offers a lot more than just going in and playing games."

So far, Cobra's approach is working. It opened in January and saw lines down the block every weekend for the first month. Now that it's May, the initial rush has settled down but the bar remains packed with dancing queens and button mashers every weekend. The line still wraps around the building some nights.

Cobra is part of a larger trend in the international bar scene. Arcade- and e-sports-themed bars are hot tickets, popping up at an increasing rate since the early 2000s. Two of the first arcade bars in the United States -- Ground Kontrol in Portland and Barcade in Brooklyn -- both set up shop around 2003. From opposite sides of the country, these two establishments busted down the doors for other entrepreneurs, and there are now easily more than 100 arcade bars in the States alone, Paredes estimates. On the world stage, Meltdown is the name to know. It's an e-sports-focused franchise with 27 locations across Europe and Canada, founded in 2012 by former StarCraft II commentator Sophia Metz.

"Our generations have always known gaming; it's part of our culture and in a lot of cases much more so than regular sports," Metz says. "Watching e-sports tournaments can be just as enjoyable as playing it, and the world definitely needs social places to do so."

One reason Meltdown was able to grow so quickly is its franchise system. Anyone with enough capital and drive can open up a Meltdown bar, and Metz says she receives five to 10 applications a day from interested people all over the world.

Much like Cobra, Meltdown bars don't rest on the e-sports theme alone. Metz emphasizes quality, even if the clientele is young.

"You can't just expect them to come back because you're a gaming bar," she says. "You need to go out of your way to make their stay memorable."

Paredes and Cobra co-founder Ariel Bracamonte also understand the importance of quality. Bracamonte owns Cobra's arcade cabinets, and he has more than 120 in total. The bar houses 40 at a time, but they're swapped out regularly -- partially so they can get some rest and a good cleaning, and partially to keep Cobra feeling fresh. Bracamonte is in the bar every day, cleaning and caring for the machines. Plus, every security guard knows how to handle simple fixes like unjamming a token, and a tech walks the bar on weekend nights to handle any larger issues. Paredes, Bracamonte and Bray never want customers to see a broken cabinet on the floor.

"Ari and myself, we put a lot of work, a lot of money into getting these games up and running the way they should be," Paredes says. "When you come in here, you're not going to see a game that looks like it's been in a laundromat."

"Gamers are just like everyone else -- they like to go out and party," Metz says. "It's one of the things I'm most proud of: having managed to show the world that we're not asocial freaks."

"It's one of the things I'm most proud of: having managed to show the world that we're not asocial freaks." - Sophia Metz

Cobra sees these worlds colliding every day. One recent night, a patron asked for $100 in ones, which he then gave to a waitress so she could make it rain on the dance floor. Another night, someone dressed as Link from The Legend of Zelda came in and hung out for a while. Cobra wasn't having a cosplay contest or anything, but Paredes and Bray were happy to see the costume. So were the other customers.

"Everybody was actually taking pictures with them," Paredes says. "They get it. It's not like you're in a regular club and people are like, 'What?'"

Community is important to Paredes and Bracamonte. They're plugged into the Phoenix arts and culture scene, and the bar is right next door to Arizona State University's downtown campus. The murals along Cobra's walls were painted by local artists, except for one big piece at the front of the bar: a woman's face surrounded by Medusa-like swirls, all in black and white. The portrait was done by El Mac, a prominent LA-based artist, and the tendrils were added by David Choe, the muralist who famously adorned the walls of Facebook HQ in 2005 (and made about $200 million in stock once the company went public). Cobra's design respects the local community while raising the bar -- literally -- with high-profile work from world-renowned artists. Cobra also hosts regular theme nights -- May the 4th and Cinco de Mayo parties are next -- and every Sunday Paredes hosts tournaments with some of the more competitive players. The bar opens at noon, complete with a food truck out front, and the players go at it for the chance to win some cash, swag and their name on the Cobra Facebook page. Eventually, Paredes, Bracamonte and Bray will set up a website with current champions and leaderboards, and they're talking about hosting viewing parties for things like EVO and other livestreamed e-sports events.

In June, Cobra will have a huge presence at Phoenix Comicon: It's actually re-creating the bar at the convention and encouraging people in costume to come down to the real location.

Arcade bars are a hot trend, which suggests many of them will close up once the fad runs its course. However, the Cobra and Meltdown owners want their bars to become permanent fixtures in their communities, much like Barcade or Ground Kontrol, which have been around for 13 years now. Bray hopes that advances in video game technology will continually drive interest in the industry's roots. Take that latent intrigue, add a dash of quality and a pinch of community, and that's the secret sauce, Metz says.

"Most people just want to meet like-minded people, take part in amateur tournaments to feel the adrenaline, or watch friends play while having a drink," she says. "The atmosphere is key. The era of internet cafes is over: People want interaction." A lot of the arcade-bar boom has to do with timing, as well. Those who grew up playing games in arcades are now old enough to appreciate a stiff drink while surrounded by friends, and younger gaming fans get a chance to experience cabinets first-hand, perhaps for the first time. Whatever the reason, Cobra, Meltdown and gaming bars across the world have stumbled onto something special for social gaming fans.

"It's been amazing, just the response and they way we connected with the community," Paredes says. "People come in here to dance, to play, to drink and just to generally have fun. That's the most rewarding thing for me and for Ari, I know, to see that people have completely embraced it and understand what we were trying to put out there."