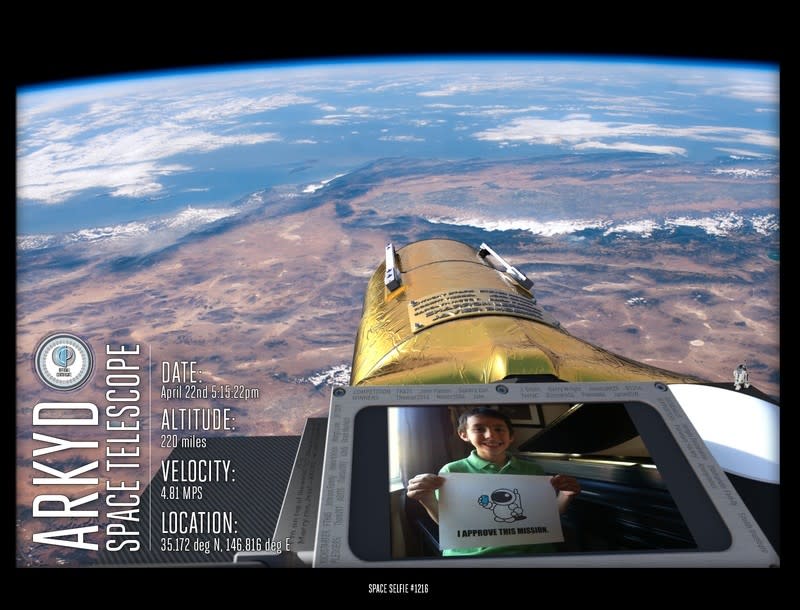 Sad news for fans of space exploration and pictures of themselves today: asteroid mining company Planetary Resources has decided to cancel its plans to launch an Arkyd 100 space telescope that would have allowed users on earth to take a "selfie" of sorts with the satellite. The project racked up $1.5 million during a Kickstarter campaign in 2013, but it wasn't enough to get the project off the ground. While they won't be getting a photo of themselves from space, the 17,000-plus backers will at least be getting their money back.

The project was supposed to use a specially modified Arkyd 100 telescope mounted with a second camera pointed at an external screen that would display a user's picture and snap an extraterrestrial selfie. The company even promised users they could point the telescope at the backdrop of their choice (as long as it wasn't the sun) and a majority of the project's backers paid $25 for space selfie option. Another 27 contributors shelled out $10,000 for tickets to the selfie-scope's launch, which obviously isn't happening at this point.

"It's a decision that we make with a heavy heart," Planetary Resources CEO Chris Lewicki told GeekWire. While the crowdsourcing campaign shot past their expectations, Lewicki says his company couldn't find the right partner to turn this into a real space mission.

Although the selfie-shooting satellite was a failure to launch, Planetary Resources is still preparing to put "a constellation of Arkyd 100 telescopes" in orbit by the end of 2019. Those satellites are designed for thermal infrared and hyperspectral Earth photography, however, so you might still technically be in the picture, but you'll be a lot harder to spot.

In this article: Arkyd-100, art, cameras, PlanetaryResources, science, space, spaceselfies
All products recommended by Engadget are selected by our editorial team, independent of our parent company. Some of our stories include affiliate links. If you buy something through one of these links, we may earn an affiliate commission.