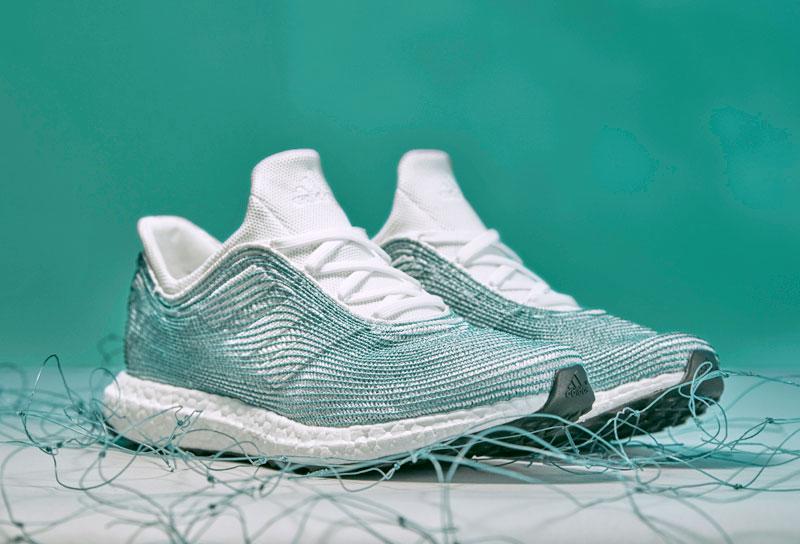 Adidas is committing to integrating recycled ocean waste into a general-release shoe this year. The sportswear company showed off a shoe with a 3D-printed midsole made from up-cycled ocean plastic late last year, as part of a collaboration with Parley, an anti-ocean-pollution organization. That was a one-off concept shoe, but off the back of that the company is now showing off a product titled Adidas x Parley.

The new limited-edition shoe's upper is made from Parley Ocean Plastic and illegal deep-sea gillnets retrieved by the non-profit Sea Shepherd during a mission to protect sea life in the Southern Ocean. Announced to coincide with World Oceans Day, only fifty pairs will be made available, and they'll be given away through an Instagram contest.

More exciting than the limited-edition shoe is the promise of a bonafide commercial product coming soon. Adidas says it'll be a world's first, integrating Parley Ocean Plastic into one of its "top footwear franchises" in the second half of this year. That release is apparently possible due to the inroads Adidas and Parley have made in turning ocean plastics into "technical yarn fibres" that can easily be integrated into products.

The new shoe will be one of an ongoing series of changes Adidas has made in an attempt to be friendlier to the environment. It's already announced it'll stop handing out plastic bags in its stores and end the use of microbeads in products like shower gels.

If you're interested in trying to snag a pair of Adidas x Parleys, the competition will run through to July 31st on Parley and Adidas' various social media channels, where the rules will be shared in due course.

In this article: adidas, culture, design, ocean, oceanplastic, parley, upcycle
All products recommended by Engadget are selected by our editorial team, independent of our parent company. Some of our stories include affiliate links. If you buy something through one of these links, we may earn an affiliate commission.