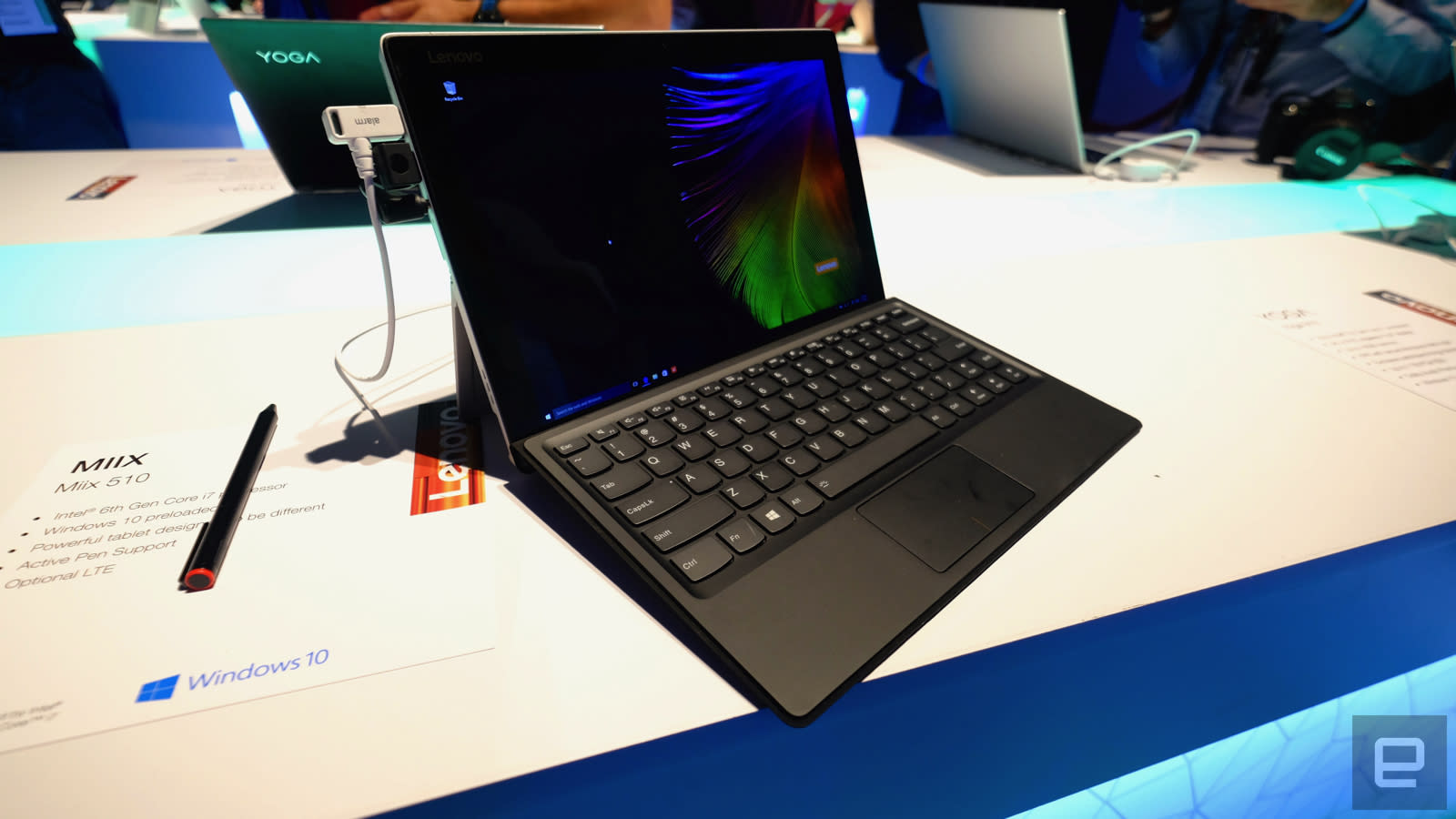 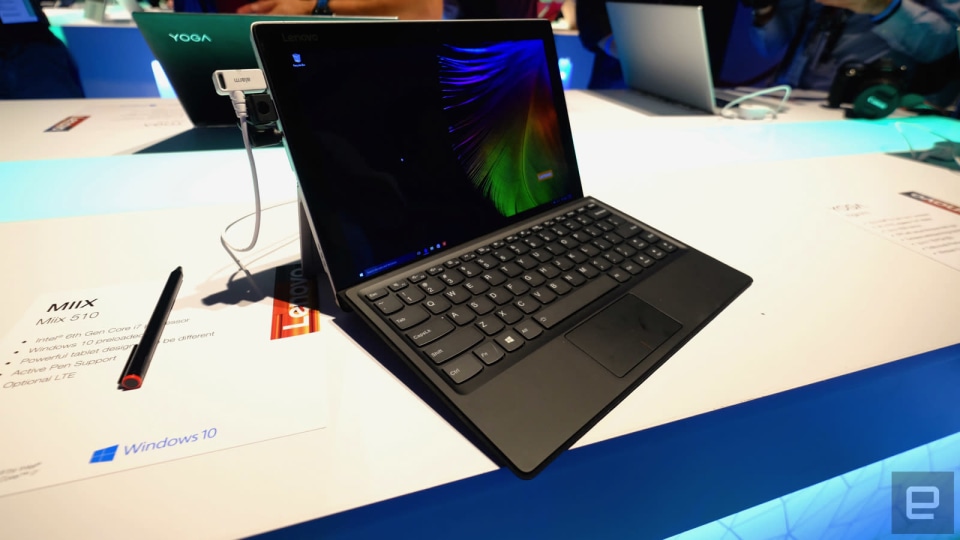 Lenovo's hoopla at IFA may be focusing on its creative-minded Yoga Book, but there are two new bread-and-butter tablets that are worth your attention, too. The 12.2-inch Miix 510 is a Surface Pro-alike for people who want a reasonably speedy 2-in-1 Windows tablet, but aren't willing to pay a premium. It sports a lower-resolution display than the Miix 700 (1,920 x 1,200) and is both heavier (1.9 pounds without the keyboard attached) and thicker (0.39 inches), but it promises to be more powerful. You can have up to a 6th-generation Core i7 processor inside rather than a Core M, and up to a 1TB SSD -- if it weren't for the maximum 8GB of RAM and 7.5 hours of battery life, the new Miix could easily go toe-to-toe with Microsoft's current flagship slate. There's even optional LTE data, which has been sorely missing on the Surface Pro line. As it is, the pricing may make you forget the shortcomings. Lenovo hasn't outlined the entry-level specs, but the Miix 510 will start at $600 when it ships in October. That's inexpensive enough that you might just get a higher-end model and still undercut its Microsoft equivalent. Oh, and Android fans? Lenovo hasn't forgotten about you. It's also unveiling the Yoga Tab 3 Plus, a 10.1-inch Android Marshmallow slate that slots neatly between the no-frills Yoga Tab 3 and its higher-end Pro counterpart. You get the Pro's 2,560 x 1,600 display, 13-megapixel rear camera, 5-megapixel front cam and 32GB of expandable storage, and there's even more RAM (3GB versus 2GB). However, this is otherwise a decidedly mid-range tablet-- you'll find a quad-core Snapdragon 652 processor and a slightly less capable 9,300mAh battery. You should still net an estimated 18 hours of battery life, though, and the Yoga Tab 3 series' signature rotating stand (complete with a hole for hanging from the wall) remains intact.

Appropriately, you're getting a middling price. The Plus will arrive in October for $300, or $100 more than the basic Yoga Tab 3 but well below the $500 of the Pro. If you like Lenovo's take on Android tablet design, this is probably the sweet spot.

Update: We added hands-on pictures of the Miix 510 hybrid. As expected, it is clearly inspired by the Surface Pro, though the device doesn't feel as premium as Microsoft's. That said, we'll see how it holds up once we test it in a more private setting, not on a demo table where dozens of other journalists are trying to pry it away from you. Unfortunately, Lenovo didn't have the Yoga Tab 3 on display, but we're told we might get a chance to see it in person later this week.

In this article: android, gear, hands-on, ifa, ifa2016, lenovo, miix, miix510, mobile, personal computing, personalcomputing, windows, windows10, yogatab3plus
All products recommended by Engadget are selected by our editorial team, independent of our parent company. Some of our stories include affiliate links. If you buy something through one of these links, we may earn an affiliate commission.