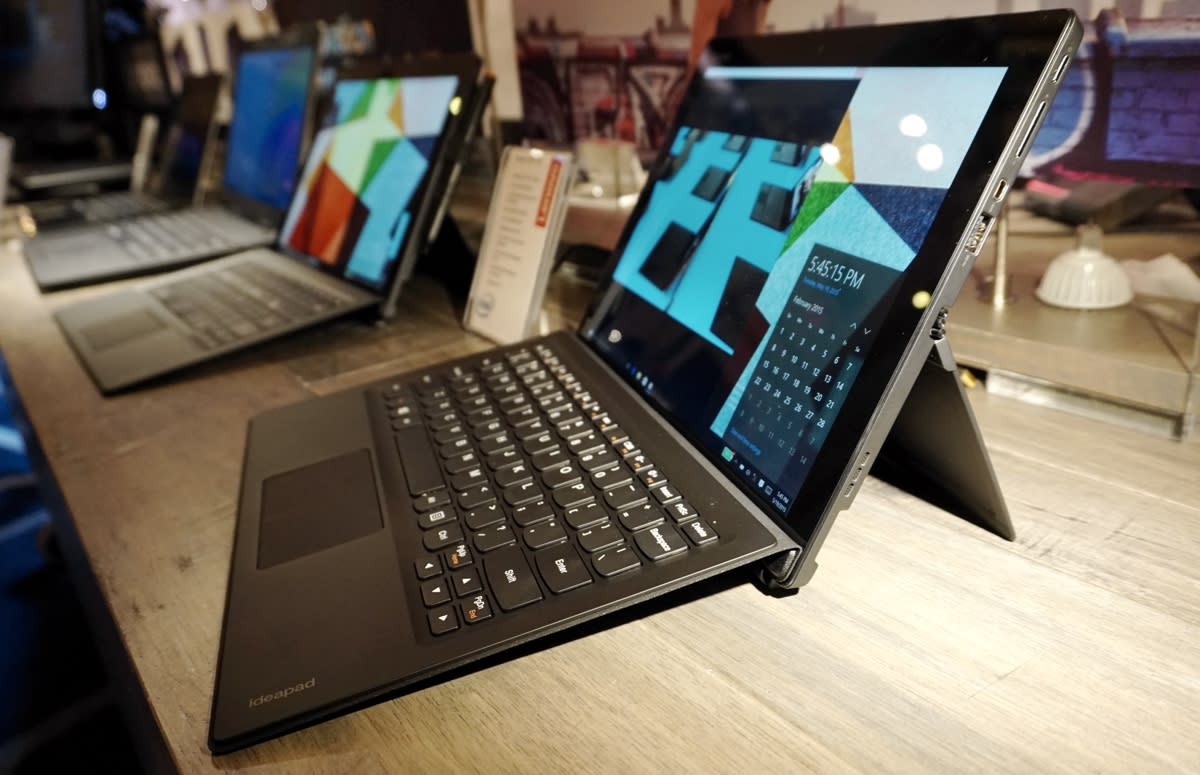 Lenovo has arguably done more than any other PC maker to blur the line between tablets and laptops, but its new Ideapad Miix 700 convertible tablet is clearly aimed at one competitor in particular: Microsoft's Surface. Like that machine, the Miix 700 sports a kickstand with a high-tech hinge; it's a pretty decent tablet on its own, and it has a well-built keyboard accessory that snaps on with a strong magnet. Even a Lenovo rep acknowledged that it was "inspired" by the Surface. But just because it looks familiar doesn't mean it's not worthy in its own right. Lenovo fans will likely appreciate the Miix 700's more subdued style, as well as its solid keyboard implementation, which feels practically indistinguishable from some of the company's laptop keyboards (and far more comfortable than the Surface Type cover). The Miix 700 starts at $699 and will start shipping in November. The Miix 700 runs up to an Intel Core M7 processor, which puts it more in line with the low-powered Surface 3 than the beefy Surface Pro 3. You can still include up to 8GB of RAM and a 256GB SSD if you need a bit more speed and space, though. Its 12-inch screen runs at 2,160 by 1,440 pixels, a tad sharper than plain old 1080p, and it weighs 1.7 pounds with the keyboard attached. There are also 5-megapixel front and rear cameras, and you also have the option of plugging in Intel's RealSense 3D camera, which will let you log into Windows 10 using just your face. That's something no Surface tablet does yet -- but you can be sure Microsoft will include something similar in its next refresh (which is expected to hit in a few months).

In my short hands-on time with the Miix 700, it felt like a solid, if somewhat familiar, device. Its kickstand lays flat on its back and takes a bit of effort to pull out, and it can expand almost to around 160 degrees. The big difference from the Surface? Its hinges are prominently displayed on the Miix 700's back, rather than being hidden under the hinge. It uses two of the same "watchband" hinges we saw on the Yoga Pro 3, a design that we ended up liking last year. I didn't have a chance to hold the Miix 700 on my lap, but judging from the sturdiness of the keyboard and its hinge design, I expect it to be about as "lappable" as the last few Surface tablets.

More on that keyboard accessory: I can't stress enough how great it feels. Lenovo is no stranger to quality keyboards, after all. But it's still surprising to see it pull off a very usable keyboard on a tablet cover. It also folds up slightly onto the tablet's screen to give the keys a bit of an angle (a design choice that Microsoft also used to stabilize its keyboard).

Still, as good as the Miix 700 looks and feels, you wouldn't be blamed for wondering why it even exists. Lenovo has explored other detachable tablet concepts, like the Miix 2, and it's also spent plenty of time honing its hinge technology for its many Yoga convertibles. It's also still the largest global PC vendor, with around 20 percent of the market. One possible reason is that it may feel threatened by the growth of the Surface lineup, which would also explain why it lifted so many design choices from Microsoft. If anything, Microsoft should take it as a compliment.

In this article: hands-on, IdeaPad, ifa, ifa2015, lenovo, Miix700, mobilepostcross
All products recommended by Engadget are selected by our editorial team, independent of our parent company. Some of our stories include affiliate links. If you buy something through one of these links, we may earn an affiliate commission.