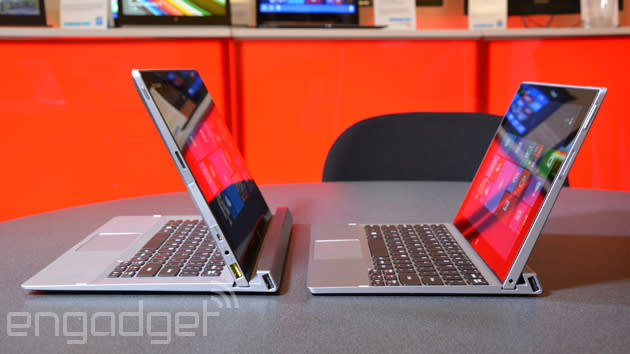 Well, this is a little confusing. After releasing the Miix 2, an 8-inch Windows tablet, Lenovo is announcing two more products called the Miix 2, except these aren't even tablets, but rather, detachable laptops. True to their name, the Miix 2 10 and 11 have 10.1- and 11.6-inch screens, respectively, and come with both a tablet and keyboard dock. In particular, as you can see in the photo above, you can insert the tablet with the screen facing either in or out -- yep, just like on last year's ThinkPad Helix, not to mention Lenovo's growing Yoga line. Either way, you get a 1,920 x 1,080 IPS display, an eight-hour battery, dual 5MP/2MP cameras, optional 3G, a microSD slot, micro-HDMI, JBL speakers and a full-sized USB port on the dock.

Aside from screen size, the biggest difference is in processing power: The 10-inch model uses a low-power Intel Bay Trail processor with up to 128GB of storage, whereas the bigger guy packs a more powerful Core i5 chip. What's more, that model goes up to 256 gigs of space, not 128. The Miix 2 10 is slated to arrive in March, starting at $499, with the 11-incher following in April for $699.

Additionally, Lenovo refreshed some of its existing laptops, including the Yoga-like "Flex" series, the powerhouse Y series and the multimedia Z line. Starting with the Flex 14D and 15D, these are basically the existing Flex 14 and 15, which can contort into many of the same shapes as the Yoga, except they can't fold all the way back into tablet mode. The real difference between these and the existing models is that the 14D and 15D make use of quad-core AMD A6 chips and a 1GB AMD Radeon HD8570 GPU -- a move that allowed Lenovo to lower the starting price even further to $499. Those are already shipping now -- in fact, if you've got a watchful eye, you may have already noticed them pop up in some online retailers. Moving on, the IdeaPad Y40 and Y50 replace the existing Y410p and Y510p, respectively. Based on the spec sheet, at least, it seems that if you can deal with a slightly less portable machine, you'll get much better specs on the 15-inch model. For instance, it's offered with a 3,840 x 2,160 display and optional touchscreen, whereas the Y40 tops out at 1,920 x 1,080 and is non-touch only. Further, the Y50 has a backlit keyboard option, while the 14-inch version apparently doesn't. The two will also have different graphics solutions -- AMD for the Y40 and NVIDIA for the Y50 -- but without specifics, it's hard to tell by brand name alone whether one model has an advantage over the other. Either way, both with up to a Core i7 Haswell processor, up to 16GB of RAM and either a 512GB SSD or up to 1TB of hard drive space. Expect both to arrive in May, priced at $999 and up. Finally, the Z40 and Z50 bring slightly lesser specs at a much lower price. Both come standard with a 1,366 x 768 screen, but can be configured with a 1080p panel. Additionally, both will be offered with up to a Core i7 processor, up to 16GB of RAM and up to 1TB of storage space. Integrated graphics are standard, as you'd expect on a mid-range system, but you can get either machine with an NVIDIA 840M GPU if you so choose. Look for these in March, with prices starting at $599.

10
In this article: ces, ces2014, featured, features, flex14d, flex15d, hands-on, laptops, lenovo, lenovoflex14d, lenovoflex15d, lenovomiix2, lenovomiix210, lenovomiix211, lenovoy40, lenovoy50, lenovoz40, lenovoz50, miix2, miix210, miix211, y40, y50, z40, z50
All products recommended by Engadget are selected by our editorial team, independent of our parent company. Some of our stories include affiliate links. If you buy something through one of these links, we may earn an affiliate commission.