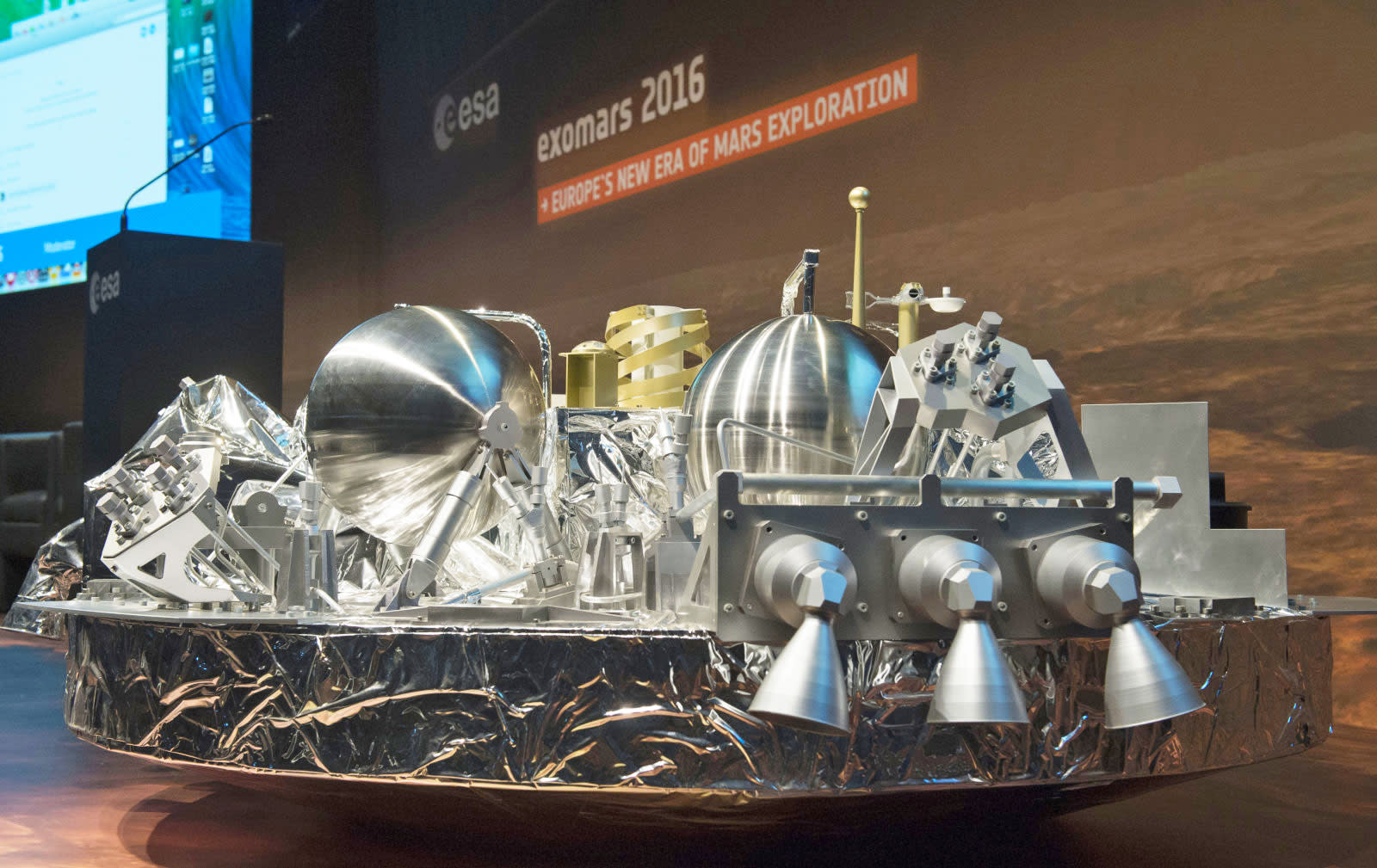 After a seven-month trip, the European Space Agency announced on Wednesday that its Schiaparelli module, ExoMars mission's landing craft, has deployed to the surface of Mars. The module jettisoned itself from its partner craft, the Trace Gas Orbiter, at approximately 10am ET and set down to the planet shortly thereafter. ESA Operations has not, however, yet confirmed that the lander survived its drop to the surface.

Upon landing, the module immediately began transmitting data on Mar's electrical fields, which influence the planet's dust storms and weather patterns. That data was first uploaded to the TraceGas Orbiter and then bounced back to Earth, which takes about ten minutes, where it was received by the Giant Metrewave Radio Telescope (GMRT). As the data began arriving at ESA Operations, it had to be interpreted and analyzed, another 30-plus minute process. Unfortunately, the initial analysis could not conclusively say whether the lander was intact. Further analysis will require another couple of hours. The ESA expects to post its next update by 4am EST tomorrow. The ESA did confirm that the lander had achieved its goal. The TGO began transmitting its own data at 12:35pm ET and, by 2:40pm ET, the ESA confirmed that the TGO had successfully inserted itself into a stable orbit around the planet.

Should it have survived, the landing module won't last very long given its small power reserves, however the orbiter will remain at least partially operational until at least 2022 and continue to seek trace evidence of life on the planet. The insights gained from this mission are expected to help govern the ESA's next trip to Mars, a drilling expedition with Russia's space agency scheduled for 2020.

Update (10/20): Experts at the ESA continue to analyze data sent back to the TGO mothership from the Schiaprelli lander. The module captured data throughout its 6-minute descent but stopped abruptly just prior to its expected landing. They have not yet been able to determine whether the lander successfully reached the surface however ESA researchers remain optimistic.

"In terms of the Schiaparelli test module, we have data coming back that allow us to fully understand the steps that did occur, and why the soft landing did not occur," David Parker, ESA's Director of Human Spaceflight and Robotic Exploration told reporters during this morning's operations briefing. "From the engineering standpoint, it's what we want from a test, and we have extremely valuable data to work with. We will have an enquiry board to dig deeper into the data and we cannot speculate further at this time."

In this article: European Space Agency, ExoMars, Giant Metrewave Radio Telescope, Mars, Schiaparelli, science, space
All products recommended by Engadget are selected by our editorial team, independent of our parent company. Some of our stories include affiliate links. If you buy something through one of these links, we may earn an affiliate commission.