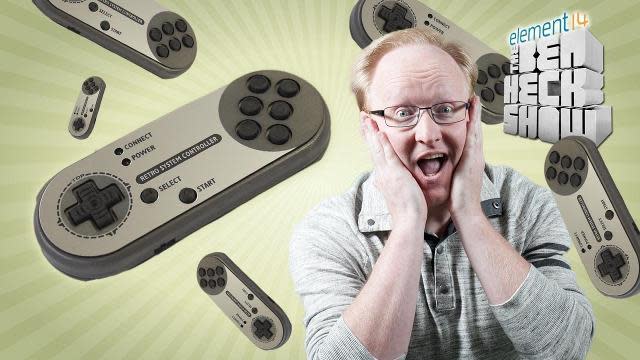 Using a build idea from the element14 Community, Ben takes an ESP8266 module and creates the ultimate all-in-one retro gaming controller for the Super Nintendo, Sega Megadrive / Genesis and Nintendo Entertainment System. To get the digital signals from the buttons across the wireless transmission to the receiver, Ben will have to use shift registers such as the 74HC595 to combine the bits into a data stream. It's not all straightforward, though: Felix steps in to help with LUA scripting and the team hits a snag with the programming. Fortunately, designing the enclosure is a lot simpler thanks to Autodesk Fusion 360. After a lot of testing, soldering and taking apart a Sega controller, the team creates a controller of wonder. Which consoles would you control? Would you design it any differently? Suggest a build on the element14 Community.

In this article: av, benheck, benheckshow, diy, do it yourself, doityourself, element14, GameController, gaming, gear, NES, nintendo, SegaMegaDrive, snes, SuperNes, SuperNintendo, thebenheckshow, video
All products recommended by Engadget are selected by our editorial team, independent of our parent company. Some of our stories include affiliate links. If you buy something through one of these links, we may earn an affiliate commission.