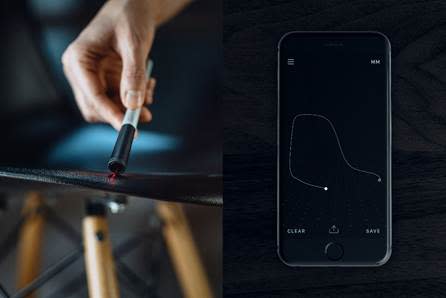 A smartpen that could already digitally measure pretty much anything will soon also be able to scan objects in 3D. Developed by Instrumments, a company made up of former Misfit creators, the impressive 01 pen will be getting a new app, adding the 3D functionality next Spring. This Pro App will enable users to roll the 01 pen over 3D objects, capturing contours and wirelessly logging and sharing the 3D data.

The update will come as a welcome relief for 3D artists, as it looks to make the long and painful process of modeling 3D objects significantly easier.

Alongside this new technology, the company has announced a variation on its 01 pen scanner, the 01Go. $50 cheaper than the 01, the 01Go works in the same way but does away with the pen functionality, making it a noticeably smaller and more portable scanner. Releasing on March 1st 2017, the 01Go is normally priced at $99, but is now available on their Indiegogo for $79 for a limited time.

The 01 launched in November for $149, thanks to Instrumments' successful Indiegogo campaign, and is shipping now to early backers. While you can just purchase the 01 and 01Go from Instrumments website, backing the device on Indiegogo is the better option, granting you five-year free access to the Pro app. The Lite app will be available to everyone for free starting December 10 on both the Google Play store and the App Store. If you make the plunge, however, you can expect to part with extra cash for accessories like sleeves, ink, lead refills, and batteries, which are also available from Instrumments website.

In this article: 3dScanner, android, gadgetry, gadgets, gear, instrumments, iphone, misfit, smartpen
All products recommended by Engadget are selected by our editorial team, independent of our parent company. Some of our stories include affiliate links. If you buy something through one of these links, we may earn an affiliate commission.