Wilson, which released a smart basketball last year, is expanding its connected sporting goods repertoire to the realm of football. The Wilson X Connected Football, as it's called, is embedded with sensors that can measure stats like distance, speed, spiral efficiency and spin rate. It's smart enough to know if it's caught or dropped and can transmit said information to a companion app via Bluetooth. In conjunction with the Super Bowl this Sunday, Wilson representatives dropped by the Engadget office in San Francisco to show off what it can do. The purpose of such a ball? According to Wilson, it's to bring video games to the backyard. But before we get into that, here are a few notes about the ball itself. By all appearances, the Wilson X looks and feels like the real deal. There is no obvious indication that it has sensors in it aside from the Wilson X logo emblazoned on its surface. Bob Thurman, Wilson's VP of Innovation, tells me that inside the ball is an accelerometer, a processor, a Bluetooth radio and a very low power battery that should last about two years with average use. The battery doesn't seem to be replaceable, but Wilson has yet to finalize the hardware.

In order to pair the ball with the phone, you have to very deliberately flip the ball upside down from one tip to the other. Otherwise, the ball will go to sleep after a period of non-use. Thurman tells me that just jostling the ball around in a bag won't activate it, so you can be rest assured it won't turn itself on accidentally. 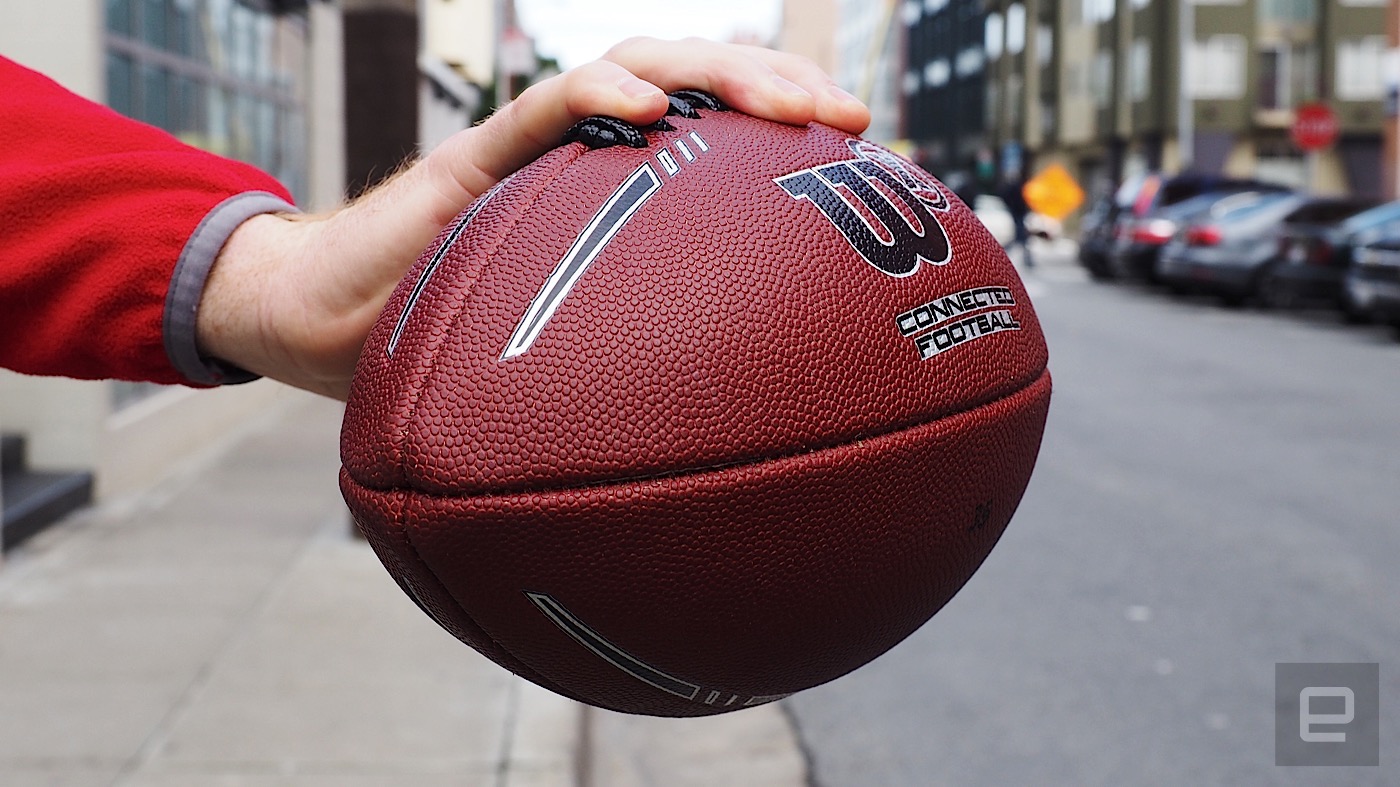 "This is not just for players," said Kevin Murphy, Wilson's General Manager of American football. "It's for everyone." While Wilson has a long tradition in the sport -- it makes the official NFL ball and is seen as the industry standard as far as the category is concerned -- it wanted the Wilson X to be more than just a fancy ball for professionals. The Wilson X, Murphy tells me, is about adding joy to the game.

"We want to get kids more active," said Thurman. "We're competing against video games. That started our whole line of thinking about the Wilson X and what we can do with it."

The idea here is that with the Wilson X, you're not just throwing the ball around the field. Because it's connected to your phone, you can make the experience more interactive. For example, you can compare stats with your friends and compete against one other to see who has the better score.

After throwing it a few times, I saw that the app captured stats like spiral efficiency and velocity and distilled that into an overall "WX Rating," which you can use to see where you rank on a leaderboard. Thurman says that since you can upload this data to the cloud, you can potentially use it to not only challenge your immediate friends, but also buddies from around the world. 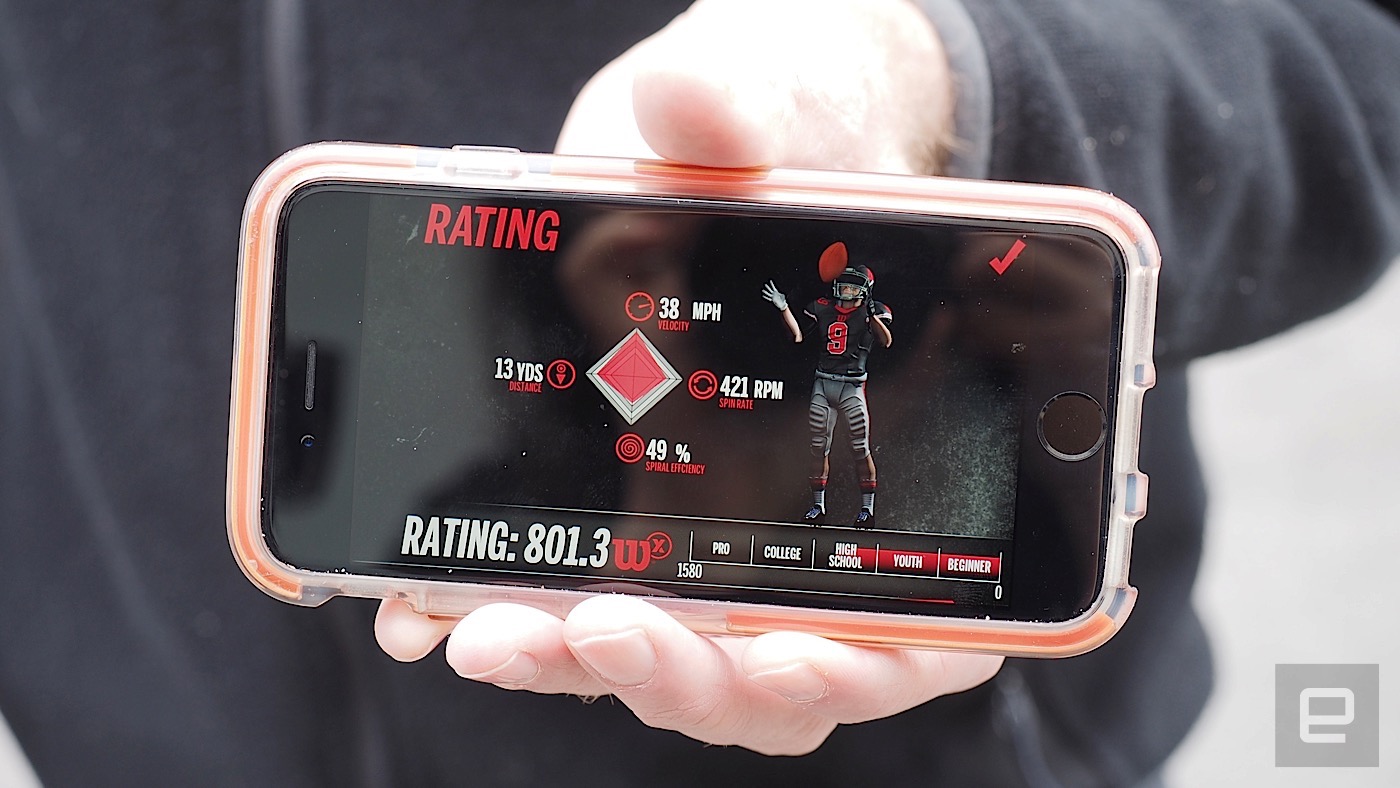 And this is just the beginning. Thurman tells me that eventually, they want apps that can let you reenact actual gameplay, score virtual touchdowns or get your workout on with football-inspired drills. "It unlocks all kinds of applications," said Thurman. "It's kind of a game console, if you will."

Indeed, Wilson is already working on more prosumer-level apps that will provide a richer set of data -- say, the quality of the throw -- for real athletes to improve their game. But its priority right now is simply the consumer version.

"We want everyone to feel how fun it is to play ball," said Thurman. "This thing will build a bridge among all people, regardless your level of skill."

The Wilson X Connected Football should be available in stores later this fall. As for how much it'll cost, well, that's yet to be determined. But seeing as Wilson's Connected Basketball retails for close to $200, we're guessing it's not going to be cheap. That's potentially a lot of money for a "smart football" that you might have to replace every two years. For a clip of the football passing in action, as well as an interview with Thurman himself, check out our video above.

In this article: bobthurman, connectedfootball, gadgetry, gadgets, gaming, gear, sports, superbowl, timeline16sporttech, wilson, wilsonlabs, wilsonx
All products recommended by Engadget are selected by our editorial team, independent of our parent company. Some of our stories include affiliate links. If you buy something through one of these links, we may earn an affiliate commission.