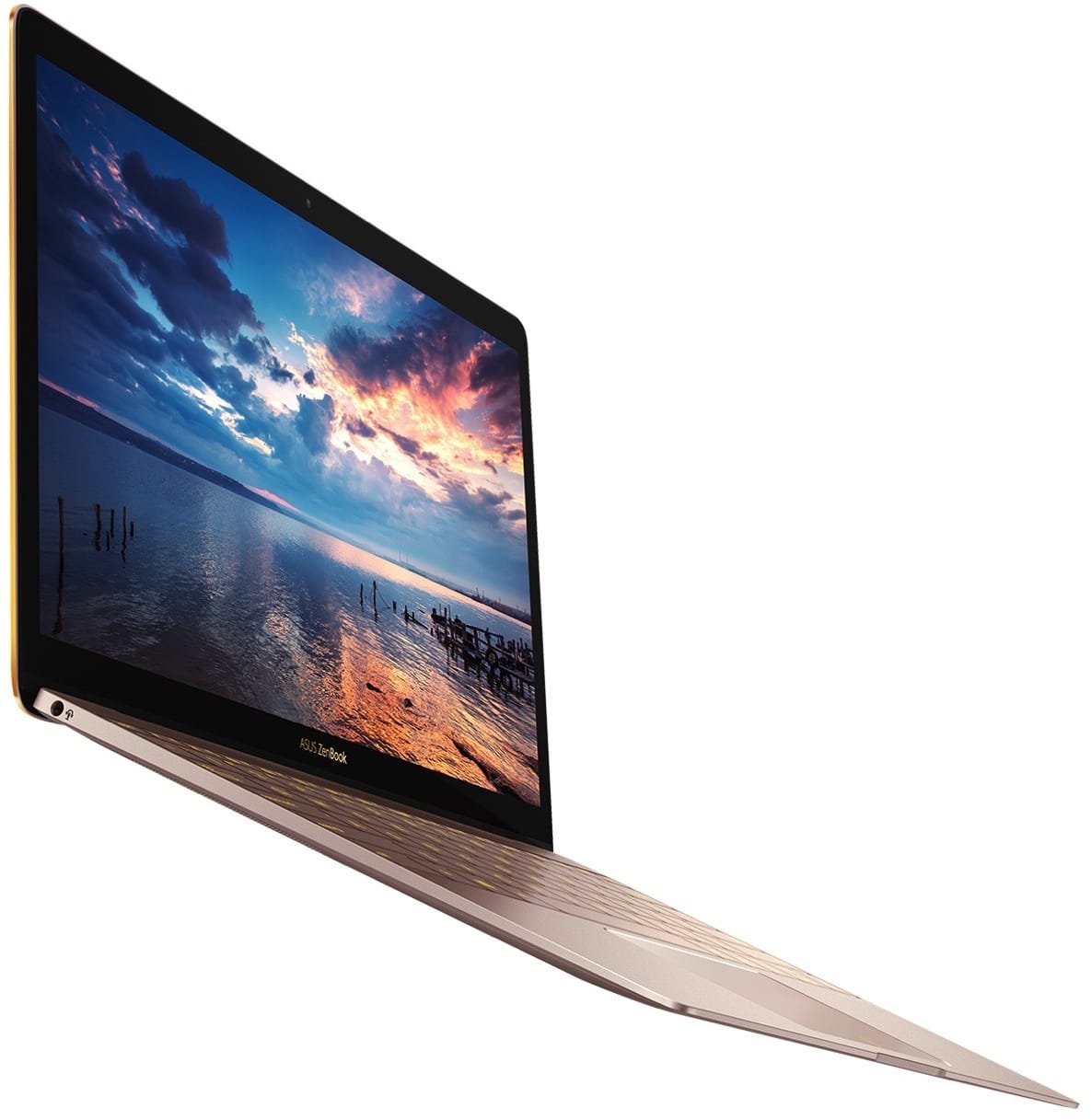 Apple's tiny MacBook was a revelation when it debuted last year. It was thinner and lighter than most ultraportables on the market, and its refined design brought over some cues from Apple's mobile hardware. So it was only a matter of time before a PC maker took a swing at a similar design. Enter the ASUS ZenBook 3, a minuscule machine that promises to be just as portable as the MacBook while packing in much faster hardware. But while ASUS has proved it can sell powerful machines for far less than the competition, it's less experienced when it comes to delivering truly premium hardware. The ZenBook 3, while attractive on the surface, is a reminder that ASUS still has a lot to learn. The ZenBook 3 does a decent job of mimicking the MacBook's design while also cramming in faster hardware. But the combination of a hard-to-use keyboard and trackpad, along with build quality concerns, make it difficult to recommend.

Be the first to review the ZenBook 3?
Your ratings help us make the buyer’s guide better for everyone.
Write a review

At first glance, the Zenbook 3 screams luxury. Its aluminum alloy case is smooth and sleek, and it measures an impressive 11.9mm at its thickest point. I particularly liked the deep shade of blue and the gold accents, which are classy in a subtle way. ASUS's ZenBook line is unquestionably "Apple-inspired," with an emphasis on thin profiles and all-metal cases. But the ZenBook 3's design in particular looks like a mixture of the MacBook and the 11-inch MacBook Air, right down to the small notch below the trackpad and the look of the speakers above the keyboard. That's one way to evoke a premium feel, I guess. But it would have been nice to see some actual innovation, as with HP's sexy new Spectre.

With a 12.5-inch display, ASUS managed to outdo the MacBook by half an inch. But Apple's laptop boasts a higher-resolution 2,304 x 1,440 display, as compared with 1080p on the ZenBook. At least it's a good-looking display, though; it's bright enough for outdoor use, while colors appear vibrant and mostly accurate. Though it's not a touchscreen display (that's to be expected with such a thin laptop), ASUS covered it in Gorilla Glass 4 for extra protection. After testing out plenty of touchscreen Windows laptops over the past few years, though, I'm surprised by how much I missed that feature here. 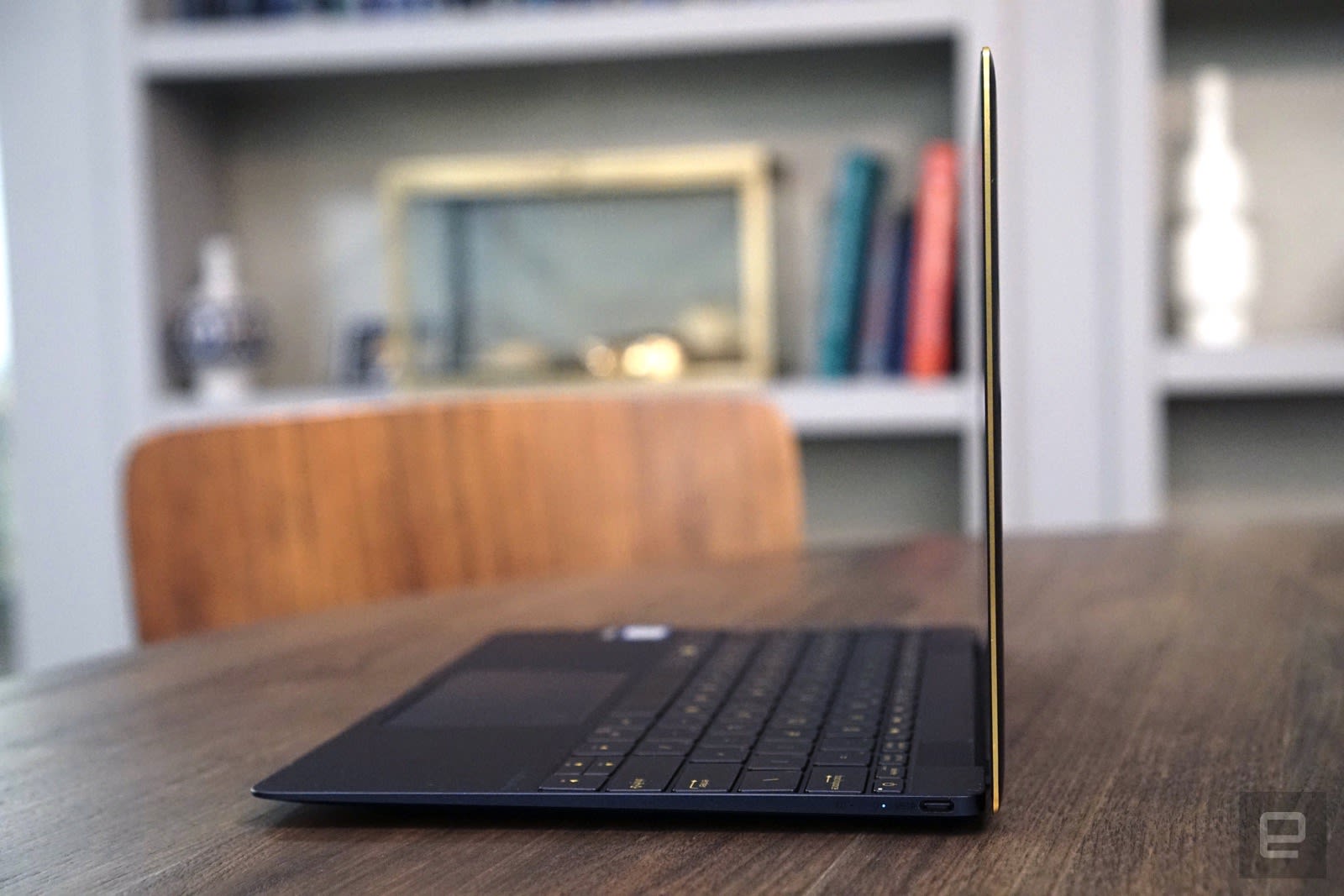 While the two-pound ZenBook 3 feels light and sturdy at first, it wasn't long before I started noticing flaws. Applying a bit of pressure around the laptop's keyboard leads to some seriously disturbing creaking noises, as if the seams around the bottom of the case are rubbing against each other. It's not something you might ever do to your laptop, but this also doesn't bode well for long-term durability. If a bit of force from my hands can disturb the case's integrity, how can I ever trust it in a book bag with other heavy items?

Then there's the keyboard and trackpad, which present a different set of issues. The ZenBook 3's buttons have more travel than those on the relatively flat MacBook, but the feedback you get when pressing them is mushy and insubstantial. Perhaps it's just because I'm a heavy typer, but I was never able to get into a decent typing flow. While I eventually got used to the wonky feedback, I still get more typos with this machine compared with every other laptop keyboard I've tested recently. Honestly, even though the MacBook's keyboard isn't ideal either, I still prefer it to the ZenBook 3's. 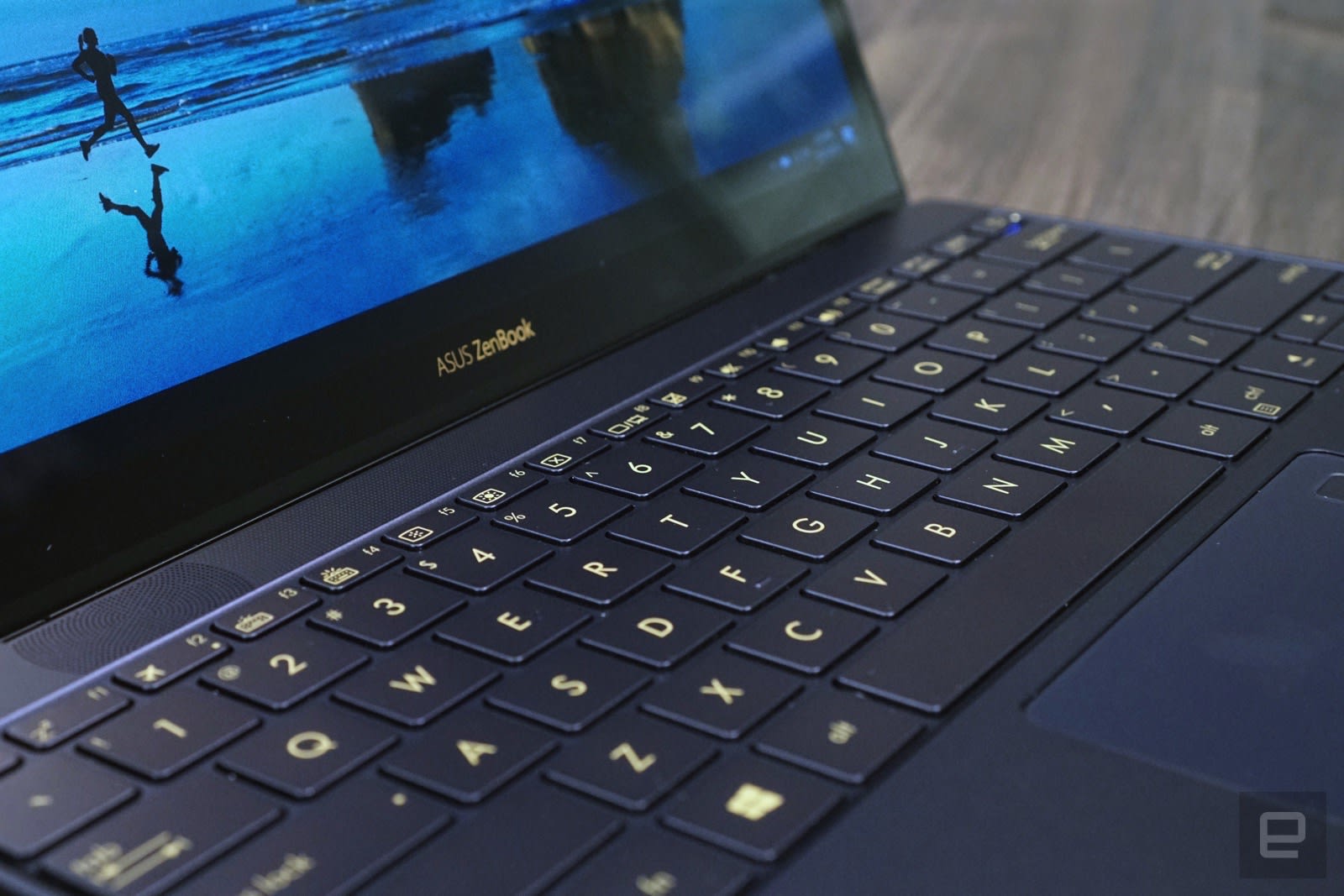 The trackpad, while large and relatively smooth, is a chore to use. It requires a lot of pressure to register clicks, which isn't great when you're trying to balance an ultralight notebook on your lap. It would often get confused with left and right clicks, and on several occasions I had to press down multiple times for it to register anything. Tapping the trackpad to select things isn't great either, as it often moves the pointer off your target. And for some reason, ASUS thought it was a good idea to put its fingerprint sensor right on the trackpad. That effectively renders the top-right portion of the trackpad a dead zone most of the time.

At least the fingerprint sensor works well; it usually gets me to the desktop in less than a second. On several occasions, I received warnings about Windows Hello being disabled because of too many fingerprint login attempts, even after I was just waking it up from sleep mode. I'm not sure why those errors occurred, but it makes me think that Windows Hello is somehow trying to identify fingerprints even when the ZenBook's lid is shut. (And that could be tied to the flexing issue as well.) 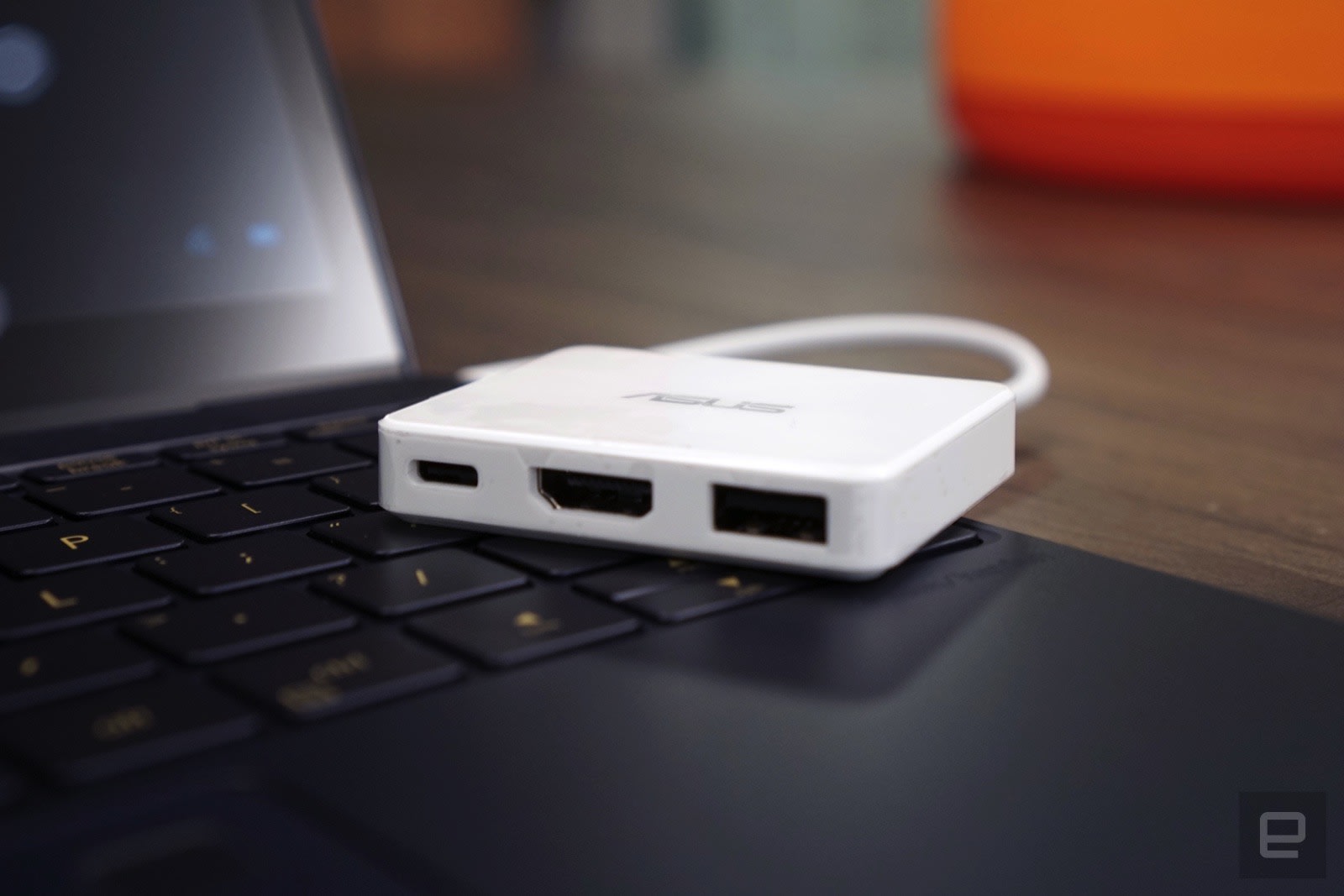 You might have noticed one other nod to the MacBook: The ZenBook 3's only ports are a single USB-C socket and a 3.5mm headphone jack. At least ASUS was kind enough to bundle in a USB-C mini-dock, which includes an HDMI port, a traditional USB connection and another USB-C socket. Unfortunately, you can use the dock's USB-C port only for charging, which will make life difficult if you want to connect a USB-C device and an external monitor at the same time.

What's truly impressive about the ZenBook 3 is that ASUS has managed to fit in seventh-generation Intel Core processors and gobs of memory in such a tiny case. Our review unit came with a Core i7-7500U, which offers speeds between 2.7GHz and 2.9GHz, and 16GB of LPDDR3 RAM clocked at 2,133MHz. ASUS says it worked with Intel to achieve that memory speed, which is faster than any other ultraportable on the market. It even exceeds the maximum 1,866MHz RAM speeds Intel officially supports for its latest chips.

The MacBook, on the other hand, is still stuck with slow Core m3 and m5 CPUs and a maximum of 8GB of RAM. Apple might refresh it soon, now that the seventh-gen Intel CPUs are available, but for the time being, ASUS wins the spec battle.

The ZenBook 3 felt just as zippy as other high-end ultraportables. It didn't skip a beat during my typical workflow, which involves having several browsers open with dozens of tabs each, plus Slack, Spotify and Photoshop. And thanks to the video-decoding capabilities in Intel's new processors, the CPU usage managed to stay below 20 percent when I streamed 4K video from YouTube. Basically, you're not sacrificing any performance here.

When it comes to real-world battery life, the ZenBook 3 also outshines some recent ultraportables I've seen, like the Huawei MateBook and the Lenovo X1 Yoga with OLED. It typically lasted an entire workday, and sometimes it even had juice left over by the time I got home. In our typical battery test, which involves looping an HD video until the power dies, it lasted around nine hours and 45 minutes. Given that Intel is stressing video decoding with its new chips, though, that figure might not be directly comparable to other ultraportables. I'll be testing the ZenBook 3 with other battery benchmarks soon and will report back with the results. 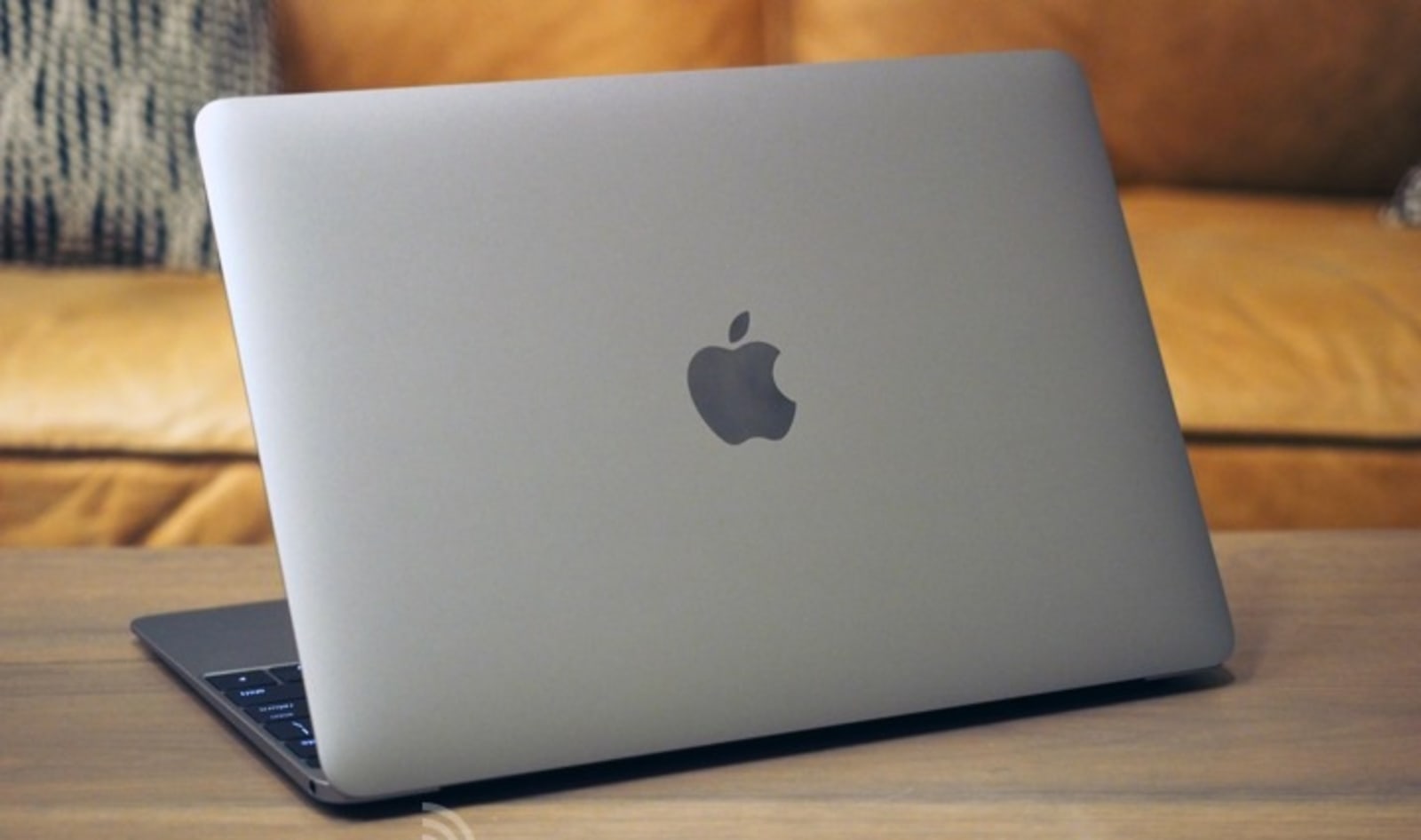 Apple's MacBook, which is really the only direct competitor, starts at $1,299, with a significantly slower Core M3 CPU, 8GB of RAM and a 256GB SSD. Bumping up to $1,599 gets you a Core M5 and more storage, but you'll still be stuck with 8GB of RAM.

If you can live with something slightly heavier, then you've got a wealth of ultraportable options to choose from, including HP's revamped Spectre 13 (2.45 pounds), the fantastic Dell XPS 13 (2.6 pounds), and even Microsoft's Surface Pro 4. All of those machines will likely get upgraded soon with Intel's seventh-gen CPUs, so it might be worth waiting a bit (or snap up one of last year's models if they're on sale). 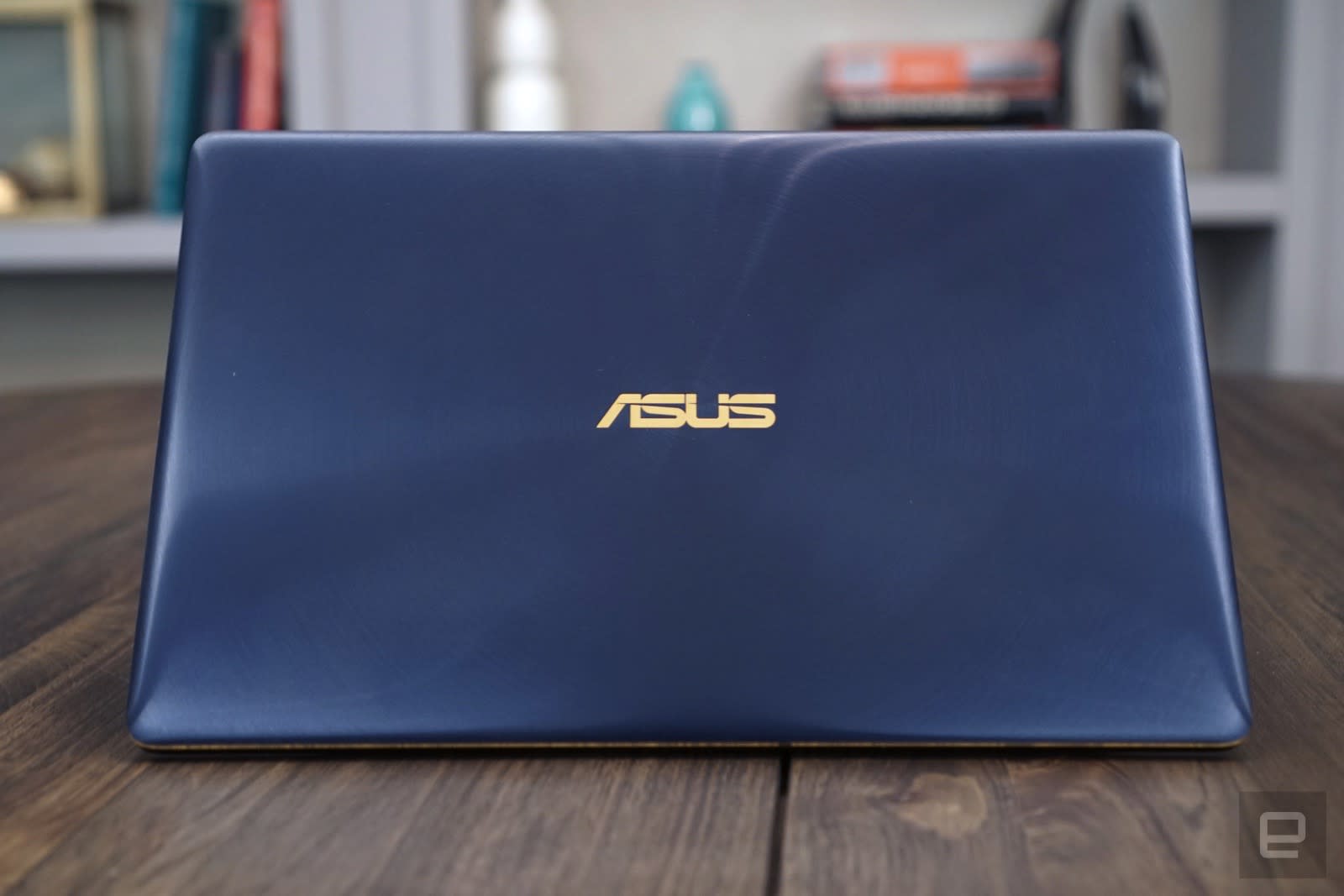 Ultimately, with the ZenBook 3, ASUS did what it does best: pack in plenty of powerful hardware for a cheaper price than the competition. But the company's inexperience at crafting truly high-end machines shows, with some truly worrying durability and usability issues. I give ASUS credit for building such a thin and powerful device, but what does that matter if the keyboard and trackpad are a pain to use?

In this article: asus, gadgetry, gadgets, gear, MacBook, personal computing, personalcomputing, review, ultraportables, ZenBook, ZenBook3
All products recommended by Engadget are selected by our editorial team, independent of our parent company. Some of our stories include affiliate links. If you buy something through one of these links, we may earn an affiliate commission.