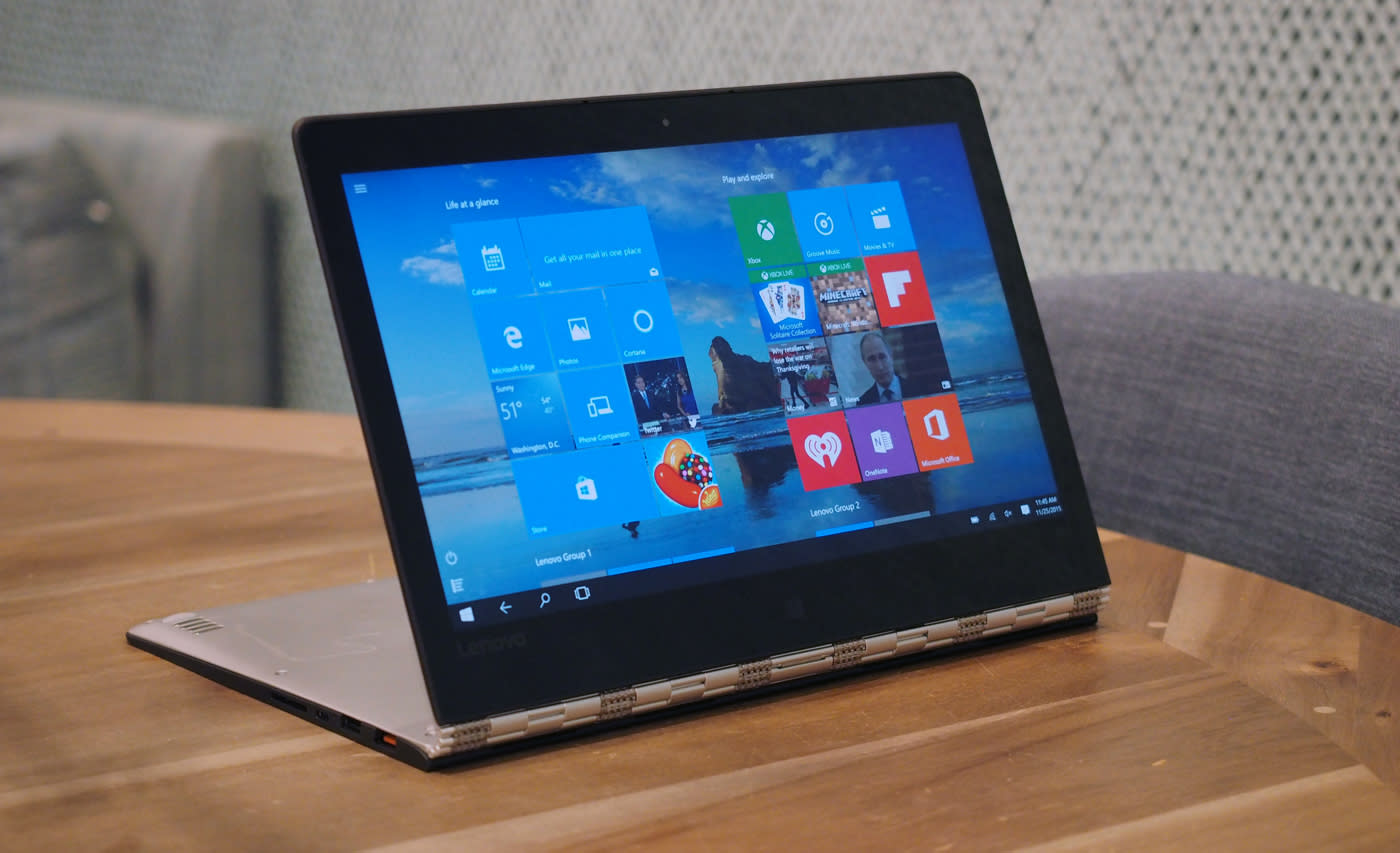 It's the laptop Lenovo should have released last year.

Lenovo's Yoga laptops hardly need an introduction at this point: The company's iconic 2-in-1s are so popular that its competitors have been copying them right and left. Last year's edition, the Yoga 3 Pro, was especially notable for how thin and light it was: just 2.6 pounds and half an inch thick, and that was with a folding touchscreen, too. The problem, we found, was that as easy as it was to hold, that compact design came with significant compromises, including lackluster performance and mediocre battery life. Enter this year's model, the new Yoga 900 ($1,199 and up). Like its predecessor, it has a 13-inch, 3,200 x 1,800 screen and a slim build, but this time it claims faster performance, longer battery life and a sturdier hinge. It is, essentially, an improvement in almost every way.

The Yoga 900 looks different from the one that came before it, but that's only because Lenovo has a fresh logo. Other than that, the company stuck with its tried-and-true design. That means a magnesium-alloy case, available in the usual silver, orange and gold colors. Lenovo also kept last year's display: a 13.3-inch, 3,200 x 1,800 IPS panel with 300 nits of brightness. The "Watchband" hinge is back too, and as ever it is what it sounds like: a mechanism designed to look links on a wristwatch.

I'll leave it to you to decide if the bling is too much -- if nothing else, we can agree that the hinge's thin design helps keep the laptop nice and thin. It's also sturdier than last year's model. When I reviewed the Yoga 3 Pro a year ago, I was concerned to find that the screen made a slight creak when I folded it back. There's none of that here; rotating the display feels smooth and controlled. Not that the Yoga 3 Pro ever broke on me, but all things considered, I'd rather my $1,200 system not sound like it's about to snap.

The keyboard deck is mostly the same, too. As before, the entire surface is covered by a textured, rubbery material, with orange accents on the keys and touchpad. Though the keyboard generally looks the same, it's actually slightly different, with six rows this time instead of five. That extra row up top leaves room for dedicated settings buttons, allowing you to adjust things like volume and brightness without having to hold down the Function key. Unfortunately, though, many of the major buttons have been shrunken down, including the Tab, Caps Lock and right Shift keys. The Backspace button in particular is so small that my finger frequently missed it altogether, hitting the Delete key in the upper-right corner instead. It's a shame, because the buttons themselves feel surprisingly sturdy, especially considering how relatively flat the keyboard is. I had particular trouble with the touchpad, which is frustrating because the trackpad on last year's model was initially finicky too; you'd think Lenovo would have gotten better at this. What follows feels like a compilation of every gripe I've had with certain Windows touchpads over the years: The cursor doesn't always go where I want it to; right-clicking sometimes takes multiple tries; and I often found myself accidentally doing things like rearranging pinned browser tabs. The situation got so bad that I found myself using the touchscreen for hitting send in Gmail and toggling IMs in Slack -- things that really weren't designed to be done with a finger.

The good news is that despite having a 50-percent bigger battery and more powerful internals (more on that later), the Yoga 900 is almost as thin and light as its predecessor, at 2.8 pounds and 0.59 inch thick. It's easy to carry in one hand and doesn't weigh down my over-the-shoulder bag too much. In fact, I'd go so far as to say that its lightness remains one of the things that I like best about it. Around those thin edges you'll also find a good selection of ports, including two USB 3.0 sockets; a USB Type-C socket allowing for video output; a 4-in-1 memory card reader; and a power connector that doubles as a USB 2.0 port (yes, you can plug peripherals into it). Finally, the bottom side is home to two speakers, which pump out serviceable sound, especially in Tent Mode when they're not muffled against a flat surface.

It's almost as if Lenovo read all those reviews of the Yoga 3 Pro that complained of lackluster performance. The new Yoga 900 only comes with one processor option, and that processor is a newly released, sixth-generation Core i7 chip. What's more, it now starts with 8GB of RAM, though you can get it with a whopping 16 gigs, like the model I tested. Oh, and while the Yoga series has long had solid-state drives, the base storage is now 256GB, up from 128GB. Not too shabby!

Indeed, the Yoga 900 is fast. I had no problem juggling Slack, Skype, Spotify and Chrome with nine pinned tabs -- a workload that routinely chokes the new 21.5-inch iMac with its 5,400RPM hard drive. Startup is also speedy: about 15 seconds to the desktop. The SSD, meanwhile, gets into the 500-megabyte-per-second range for both reads and writes (that last part is no small feat on other machines). If anything, I felt sometimes that the flaky touchpad and undersized Backspace key slowed me down, to the extent that they forced me to pay attention to what should otherwise feel natural: typing and mousing. But the machine itself is fast.

What I can't account for is the fact that although the Yoga 900 feels fast, its benchmark scores are still lower than one of the Surface Book units I tested; that model had the same graphics card, but half the RAM and a Core i5 processor, not i7. I wonder, then, if the Yoga 900 could have been even faster with better tuning but even so, I didn't feel like I was wanting for speed in real-world use.

Lenovo rates the Yoga 900's 66Wh battery for eight to nine hours of use. I'd say that's a conservative estimate: Even with the brightness fixed at 65 percent and an HD video looping continuously, I still logged nine hours and 36 minutes, a two-hour increase over last year's Yoga 3 Pro. Obviously, had I stuck to more modest brightness settings, and had I been using the machine more intermittently, I could have managed even more runtime.

In the grand scheme of modern-day laptops, this is still not an exceptional showing -- the HP Spectre x360 can eke out eleven and a half hours, and the Surface Book can manage nearly 14 if you get it with integrated graphics. Then again, those are heavier machines with room for bigger batteries. Compared to other thin and light machines, like the Surface Pro 4 and the Dell XPS 13 we reviewed earlier this year, the Yoga 900's battery life is just as good if not better. While the Yoga 900 might seem pricey, then, you could also argue it's a good deal for the money, considering the specs, battery life, display, size and weight, and the real-world speed. Even the keyboard is comfortable, that small Backspace key notwithstanding. That said, it still faces some stiff competition from almost all corners of the PC universe. There's the Dell XPS 13 touchscreen notebook ($800 and up) and HP's Spectre x360 convertible ($900-plus), both of which were recently upgraded with sixth-gen Core processors. The Spectre x360 in particular has the same form factor as the Yoga, but with even longer battery life and a more comfortable keyboard and touchpad. It's for those reasons that we gave the Spectre an even higher score of 88. Microsoft's Surface Book also got an even better rating than the Yoga 900. Though it's only the company's first attempt at a proper laptop, the firm actually got most things right, including a premium yet distinctive design; best-in-class battery life; fast performance with lots of configuration options; and a great keyboard and trackpad. Also, when you detach the 13.5-inch screen, the tablet portion weighs just 1.6 pounds, making it even easier to use as a slate than Lenovo's offering. It's pen-enabled too, which the Yoga 900's screen isn't. The only thing is that the Surface Book has really short battery life in tablet-only mode, whereas with the Lenovo, it's the same nine-and-a-half-hour runtime either way.

There are other thin-and-light Windows laptops, but they're not as good. As of this writing, Samsung and Acer haven't refreshed their premium notebooks with the latest Intel processors. Toshiba, meanwhile, has a pint-sized laptop with a 4K screen, but those extra pixels mean the battery life is worst in class -- around five hours in our tests. The Yoga 900 is the laptop Lenovo should have released last year. It's notably thin and light, but manages to offer fast performance and long battery life. It's also more durable than the 2014 edition -- a reassuring thing when you're about to drop $1,200-plus on a notebook. All told, it really seems that Lenovo listened to its customers (and reviewers), and the product is better for it. If you're reading this, though, Lenovo, I would hope that next year's follow-up has a redesigned keyboard with no shrunken buttons, and that the touchpad is more reliable. Then you'd have a real winner on your hands.