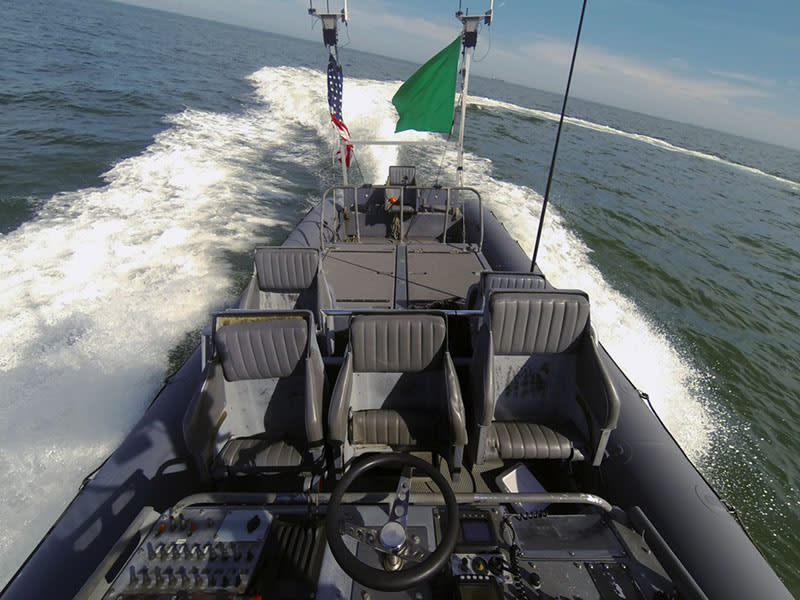 While the US Navy's new state-of-the-art USS Zumwalt destroyer struggles to remain functional, the service branch's R&D department has been busy investigating cutting-edge tech at a much smaller scale. Back in October, the Office of Naval Research (OCR) demonstrated the harbor defense capabilities of a group of prototype small autonomous boats, aka "swarmbots," in Chesapeake Bay.

The ONR used four rigid hull inflatable boats (RHIB) -- think of the larger soldier-ferrying Zodiacs -- to show off the drone squad's ability to patrol, investigate approaching unknown crafts and relay that information back to a human supervisor. Using autonomous vehicles for dull yet important tasks such as harbor defense is cheaper than using human crews, especially since some of the drone tech used in the demo is off-the-shelf.

The ONR's autonomous system, Control Architecture for Robotic Agent Command and Sensing (CARACaS), was first demonstrated in RHIBs back in 2014, according to the department's press release. That exercise showed how the drone boats worked together to escort larger ships and swarm around threats. Since then, the Navy's boosted CARACaS' ability to have multiple crafts collaborate on task sorting, expand behaviors and tactics and improve automated vessel recognition.

Using swarms of these refitted unmanned crafts monitored by a few officers is more economical than needing as many boats loaded with 3-4 persons each. But just like expendable aerial attack drones, autonomous units can also be sent on more dangerous missions than those with human crews, like mine clearance. The configuration used in these tests is also beneficial: The Navy already has plenty of RHIBs in their inventory, and refitting it with a CARACaS kit is quick and inexpensive, according to the ONR's press release.

Source: Office of Naval Research
In this article: boat, drone, gear, military, OfficeOfNavalResearch, security, ship, swarmboat, UsNavy
All products recommended by Engadget are selected by our editorial team, independent of our parent company. Some of our stories include affiliate links. If you buy something through one of these links, we may earn an affiliate commission.