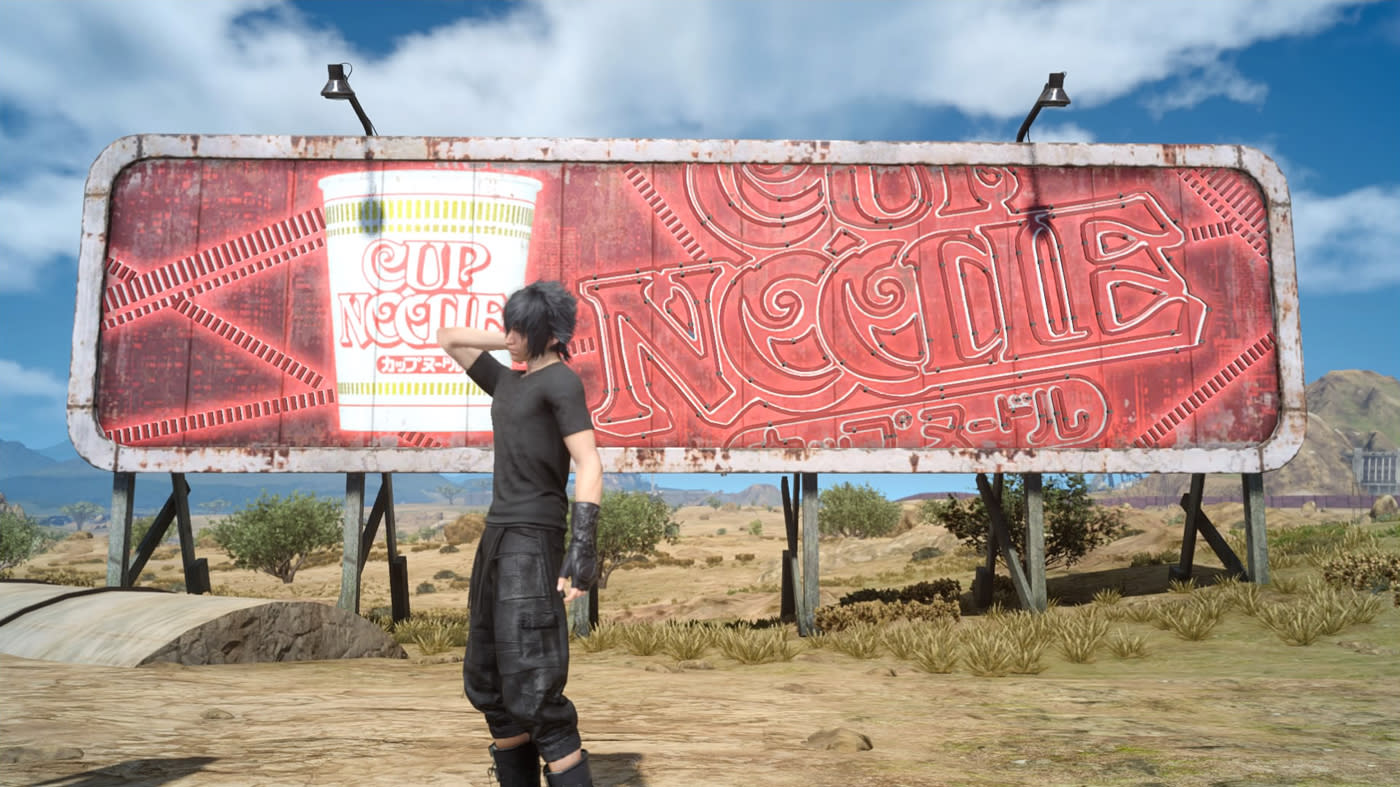 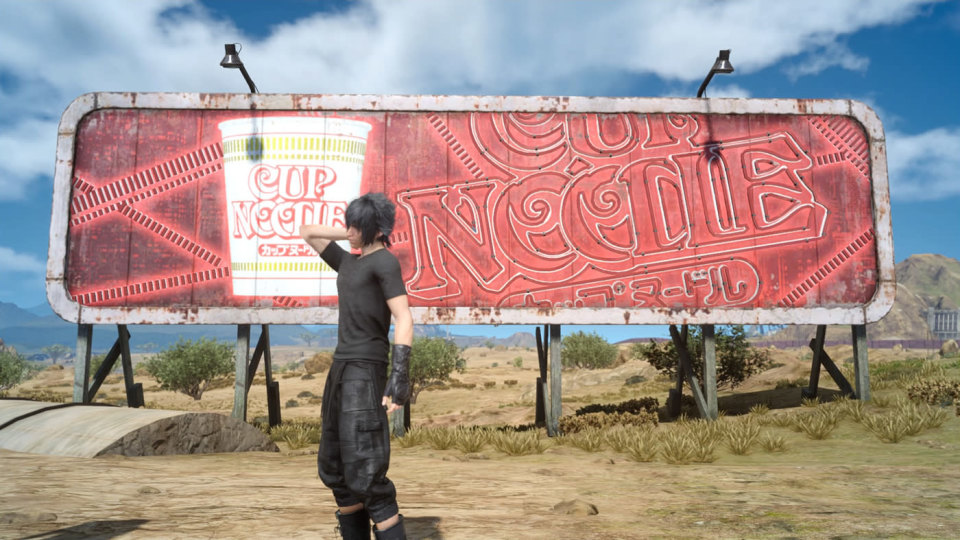 I should have been turned off by the commercial advertising casually strewn throughout Final Fantasy XV. Coleman logos are plainly visible when the game's heroes set up camp for the night. Billboards for Nissin Cup Noodles line the highways of Eos. It's product placement so obvious it's almost laughable -- and yet, I now have an eight-pack of instant ramen on my kitchen counter. What happened? A beautiful, devious combination of empathy and nostalgia.

My shame in falling for a game's product tie-ins is dulled somewhat by the knowledge that I saw it coming. Final Fantasy XV planted the seeds of manipulation early, offering me a grain of nostalgia in the game's first moments. The story opened with four friends pushing a broken-down convertible to a nearby service station -- a pit stop that sold a copy of the Final Fantasy IV soundtrack that could be listened to when the hero's car was up and running again. Suddenly, the game's road trip was scored with the music from my favorite Final Fantasy. The game had anchored me to its world by draping it with my love of its predecessors. At first blush, this seems like a simple Easter egg, but it's more insidious than that. Square Enix was using the power of association to endear me to its brand, a suggestion it would cash in on later.

As the game's nostalgic hook kept me invested in its bare-bones plot, its four heroes livened up the adventure with charming repartee, breaking into conversation while driving, fighting in battle or shopping at an in-game gas station. I grew to care for Noctis, Prompto, Gladiolus and Ignis as they revealed their personalities. This planted Square Enix's second seed of manipulation: empathy. After a dozen hours of play, the game had sold me on its tagline: A Final Fantasy for Fans and First-Timers. I was nostalgically hooked, and I cared about the characters. Then, the advertisements came.

It was subtle at first. I'd stop to camp, and Noct's friends would playfully challenge him to a game called King's Knight, passing through the camping cut scene by poking at their smartphones. I thought nothing of it, but over time the characters started talking about the fictional video game in idle conversation. My curiosity got the better of me, and a quick Google search revealed that King's Knight: Wrath of the Dark Dragon was a real smartphone game advertised as "a smash hit in the world of Final Fantasy XV." I groaned at the obvious cross-branding, but not hard enough to stop me from downloading the game. Despite seeing through Square Enix's ploy, I had to know what had the cast of my game so engaged.

Soon, the product placement grew even bolder. And weirder. Every time I drove through the town of Lestallum, Gladiolus would yammer on about how badly he wanted Cup Noodles -- leading me to a Cup Noodles vendor in the town square. Approaching the in-game store tailored to a specific real-life product kicks off a quest that's little more than a playable commercial.

Gladiolus wants the "perfect cup" of instant ramen and waxes poetic about all the possible ingredients. The mission sets you out on a hunt to find fresh toppings to the "already delicious" Cup Noodles to make them even better while simultaneously doubting the product can even be improved upon. "After all," Gladiolus shills in an actual line of spoken dialogue from the game, "the shrimp they use in Cup Noodles was selected from over 60 varieties for their flavor and their shape." It's a kind of direct marketing that I've never seen in a game before -- yet it's so knowingly absurd that it's actually kind of enjoyable. Each character's voice actor delivers his lines with a hefty helping of camp, delighting in how awful and silly the entire cross-promotion is. It plays like a parody of itself, and it's hard to imagine the gimmick selling even a single cup of instant ramen. And yet, one week later I found myself staring down a pack of Cup Noodles at my local grocery store. I felt like an idiot, but what the hell: It was a guilty pleasure that reminded me of college and was only $0.35 a cup. Besides, Gladiolus made it sound really good.

Square Enix exploited my memory of the Final Fantasy franchise and my fondness for its characters again and again. I was eventually coaxed into downloading the mobile version of Justice Monsters Five, one of Final Fantasy XV's minigames, and found myself browsing Steam and Google Play for the classics whose music I'd been listening to in driving sequences. As I considered giving Final Fantasy XIII a second chance, I knew my roused interest was nothing more than the fruits of a carefully planned cross-promotion campaign. I'm surprisingly OK with that. After two MMOs that didn't resonate with me, a series of clunky spin-offs and a numbered entry to the franchise that fell flat, I was positive Square Enix had lost its touch. Final Fantasy XV not only proved me wrong but also tricked me into remembering how much I loved the franchise in the first place. If the price for that renewed fandom is a couple of servings of Cup Noodles, so be it. I can take the sodium.

In this article: av, coleman, cupnoodle, ffxv, FinalFantasy, FinalFantasyVersusXiii, FinalFantasyXv, gaming, productplacement, square, squareenix, squaresoft
All products recommended by Engadget are selected by our editorial team, independent of our parent company. Some of our stories include affiliate links. If you buy something through one of these links, we may earn an affiliate commission.