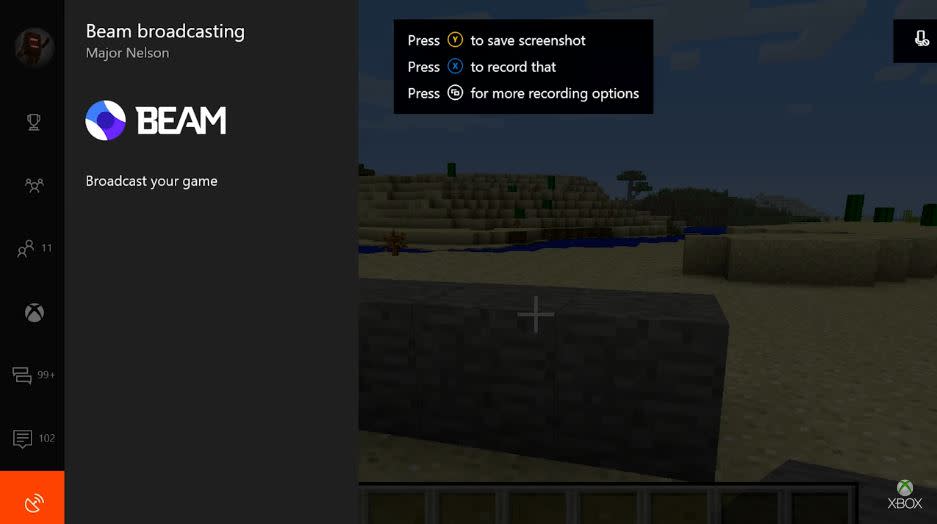 Microsoft bought livestreaming service Beam last August to fold its advanced viewer interactions with its gaming services on Windows 10 and Xbox. They finally opened testing up to select users at the end of January, but today, they're taking the next step in competing against Twitch by launching the Beam app for Xbox One. As with the previous trials, only certain members of the Xbox Insider Program get first crack at it, but you'll now be able to watch our favorite streamers right from your console.

After downloading, hit the Guide button and find the Beam menu icon to start broadcasting. Standard options for toggling on and off microphone, camera and chat, as well as camera position and overlay options, are right in the settings.

Of course, Xbox Insiders who made it into late January's tests could already stream from their console -- the app lets you watch and interact with channels you follow "in near real-time." Viewing in the Xbox One app also generates the service's Sparks currency and XP, just like the desktop version. Beam's promising other ways to interact with streams, which they plan to announce at GDC 2017 in a couple weeks.

In this article: av, beam, broadcast, gaming, microsoft, streaming, Xbox, xboxinsiderprogram, XboxOne
All products recommended by Engadget are selected by our editorial team, independent of our parent company. Some of our stories include affiliate links. If you buy something through one of these links, we may earn an affiliate commission.