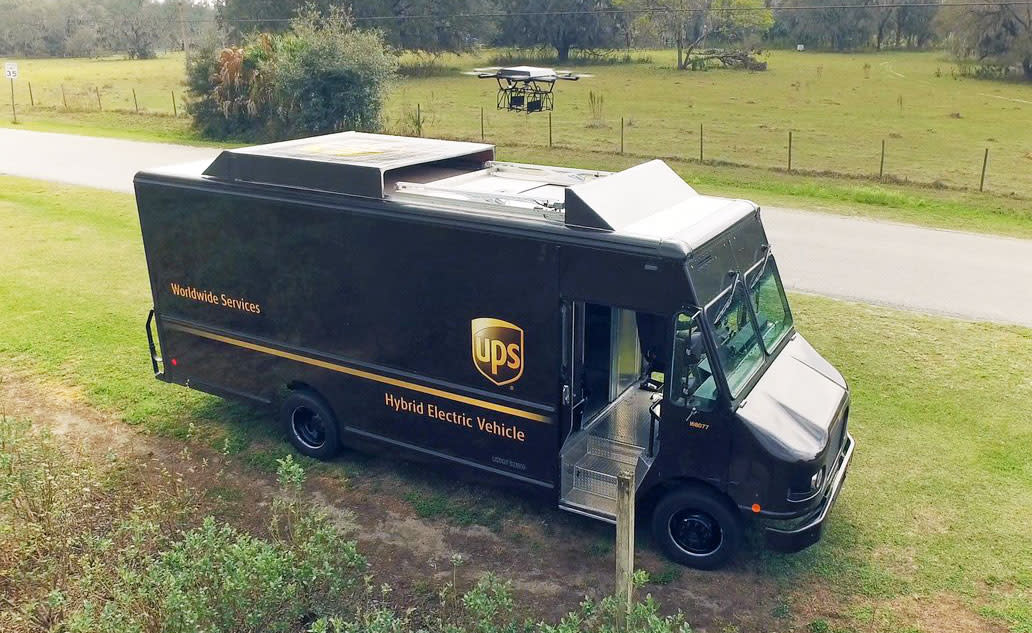 Drone-based deliveries are quickly moving out of the realm of science fiction. Amazon, 7-11 and a host of startups are already toying with the idea. Now, UPS, one of the biggest parcel delivery services on the planet, is testing a system that will drop packages at your door while the driver moves on to the next house.

The "last mile" isn't just an issue for broadband service providers. That last bit of distance between a UPS driver's van and the recipient's door is the least efficient portion of the entire shipping process. In fact, UPS figures that if it can cut just one mile from the 66,000 routes its drivers cover every day, the company could save upwards of $50 million annually.

To do this, UPS has designed a specially-equipped diesel-electric delivery van that houses a swarm of UAVs. Rather than grab a package and walk to the front door, the driver instead pulls over, hops in the back of the van, drops the package in a delivery drone's carrying cage and launches it through the van's retractable roof. The drone then flies up to the drop off location, releases the package and autonomously returns to the van. What's really cool is that the driver doesn't have to wait for the drone to return, they can just head off to the next delivery location.

"Our drivers are still key, and our drones aren't going to be replacing our service providers, but they can assist and improve efficiency," says Mark Wallace, senior VP of global engineering and sustainability, told Wired.

This system was developed back in 2014 by the University of Cincinnati in conjunction with the Workhorse Group, an Ohio-based company that builds electric delivery trucks. The drones themselves, weigh just under 10 pounds and can fly for up to 30 minutes at a time before needing to return to the van and recharge. Unfortunately, UPS still needs to get approval from the FAA before we'll get drones dropping packages at our doorsteps and that could take a while.

In this article: delivery, drone, gear, lastmile, package, transportation, UAV, UniversityOfCincinnati, UPS, vans, workhorse, WorkhorseGroup
All products recommended by Engadget are selected by our editorial team, independent of our parent company. Some of our stories include affiliate links. If you buy something through one of these links, we may earn an affiliate commission.