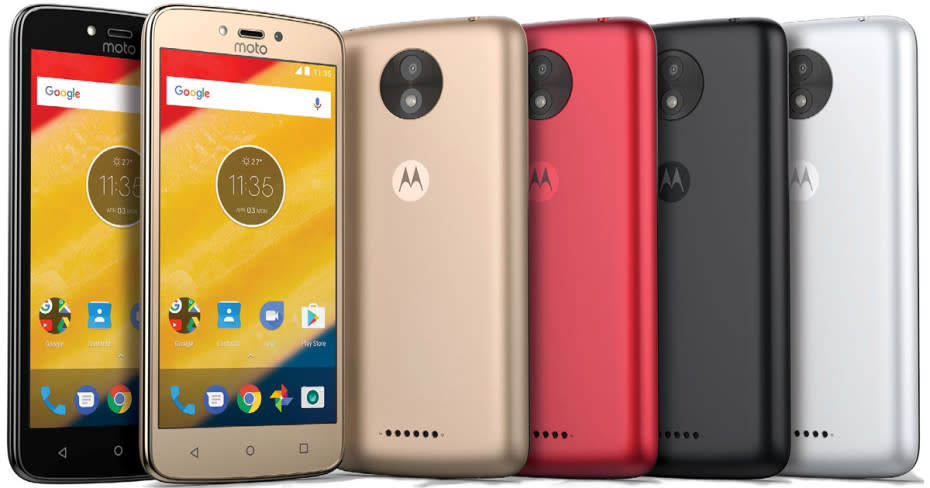 Life under Lenovo has had its ups and downs for Motorola. The company has found success on the budget end of the smartphone spectrum with the recent Moto G5 and the Moto E series before that, but the mobile phone business is still bringing down its corporate parent. Based on a new leak obtained by VentureBeat, however, the company appears to be doubling down on the budget end of its product line with an even more affordable Moto C series of phones.

The Moto C and Moto C Plus are directed at first time smartphone buyers VentureBeat's Evan Blass reports, so they make a solid base for Android 7.0 Nougat but won't offer much beyond that. Both the C and the C Plus will sport a five-inch display, so the "Plus" badge is actually a reference to a bump in specs rather than screen real estate. The Plus offers 720p HD resolution, 4G LTE and a 64-bit 1.3 GHz quad-core processor, while the standard C only has a 480p screen. The C will come in two flavors, however: one with 4G LTE radios and one presumably aimed at emerging markets and limited to only 3G. The C will only come with 1GB of RAM, but the C Plus with offer either 1GB or 2GB depending on the region. Likewise, storage space will vary depending on the market, but you can expect either 8GB or 16GB onboard with microSD slots to handle any media library overflow.

On the back, the Moto C brings along a 5-megapixel rear camera (with autofocus only on the 4G model). The C and the C Plus share the same 2-megapixel selfie shooter, but the Plus gets an 8-megapixel sensor on the main camera. Both models should get some respectable battery life with a 2350mAh capacity in the Moto C and 4000mAh in the C Plus. No word yet on release dates or launch markets, but when they are available, you can find them in Motorola's now-standard black, white, gold and red.

In this article: gear, leaks, lenovo, mobile, motoc, motog, Motorola
All products recommended by Engadget are selected by our editorial team, independent of our parent company. Some of our stories include affiliate links. If you buy something through one of these links, we may earn an affiliate commission.