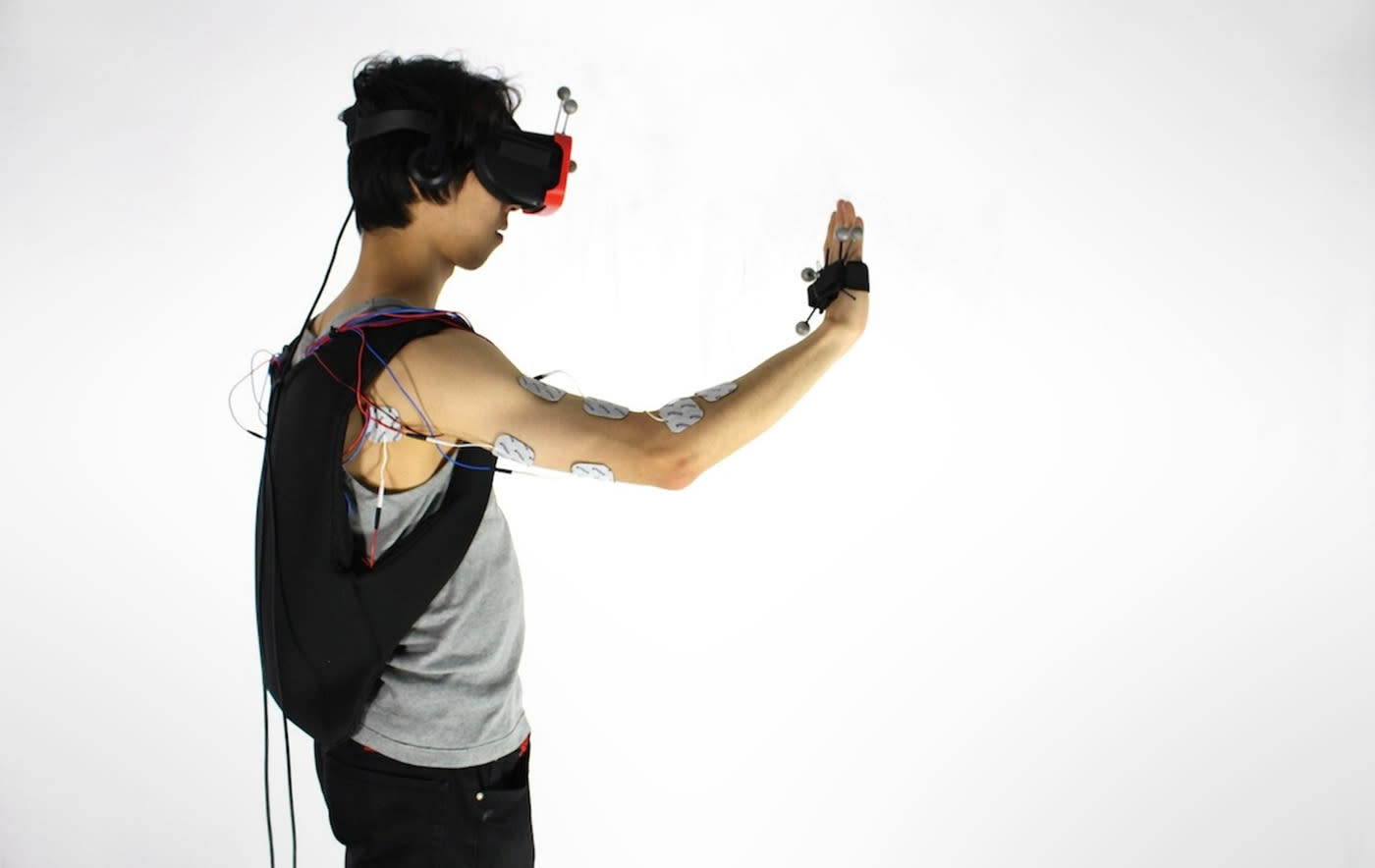 Virtual reality is still a pretty crappy facsimile of The Matrix, but scientists are trying their best to fix that. At the CHI'17 conference in Denver, a team of researchers from the Hasso-Plattner-Institut in Potsdam showed off a haptic system that can simulate walls or heavy objects via electrical muscle stimulation. "We were really interested in trying to explore one of the hardest things to recreate in terms of physical sensation, which is a wall," says co-author Pedro Lopes.

The researchers hooked subjects up with a medical-grade eight-channel muscle simulator (EMS) installed in a backpack. That's controlled over USB by a VR simulator that works with Samsung GearVR, hand-mounted trackers and a motion capture system. "The major potential here is that this is something you can have with very little hardware," Lopes explains.

They attached electrodes to users' forearms and biceps, which automatically apply a mild electrical shock when they touch or lift a virtual object. That tenses the activated muscle, repulsing the users hand and making them feel they're pushing against a wall or picking up a heavy cube (see the video, below).

It took the team a while to create a realistic simulation. At first, they applied a current to the users' muscle proportional to their force, "just strongly enough to prevent it passing through [a wall]," the team wrote. However, one participant said that it "felt like a magnet pulling the hand backwards," in a not-very-realistic way.

Eventually, they arrived at two different simulators. In the first, they cut off the EMS intensity at a certain limit. That allowed users to penetrate simulated objects by about 10cm, a good simulation for foam or other soft things. In the second case, they used a short EMS pulse that actually propelled the user's hand backwards, never allowing them to push through the wall or other object. (The shocks aren't intense enough to hurt users, by the way.)

The technology isn't exactly new, as it has been used for physical therapy and exercise stimulation for years (think of those janky ab stimulators). There are even some companies trying to develop it for entertainment purposes, like the team behind the Teslasuit, which also uses electric muscle simulation. However, Lopes thinks it should be very low profile tech that can even be integrated into regular textiles. "There's a need for physicality in VR," he told Fast Co. "The next step is bigger force, more physical sensations."

In this article: ElectricShock, Hasso-Plattner-Institut, Muscles, Objects, science, Stimulator, video, VR, Walls, wearables
All products recommended by Engadget are selected by our editorial team, independent of our parent company. Some of our stories include affiliate links. If you buy something through one of these links, we may earn an affiliate commission.