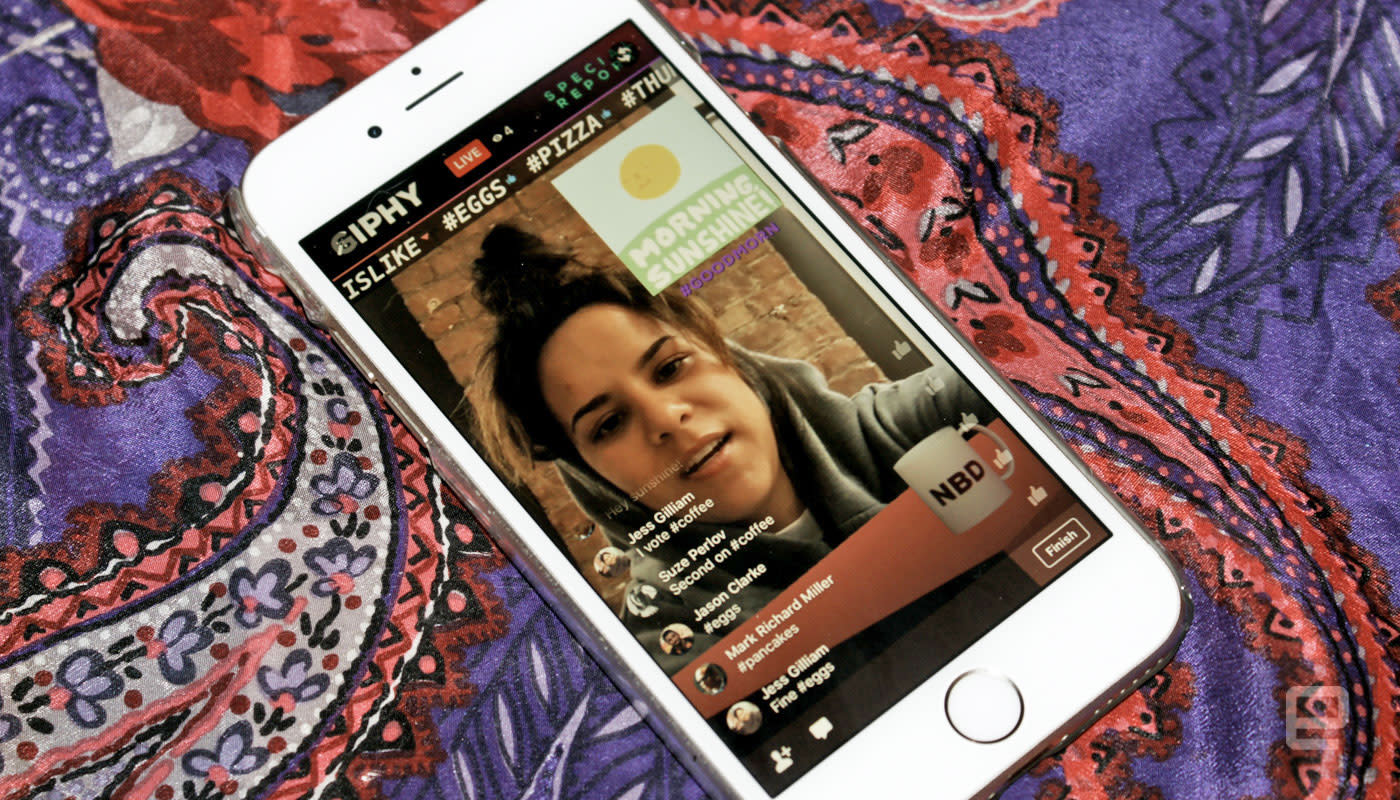 Facebook is bloated. It's slowly morphing into the iTunes of the social media world. At F8, the company's annual developers' conference, the company added even more features to its core apps and said that many more are on the way. But there's one partnership that makes the increasingly confusing social network a bit more fun: Giphy in nearly everything.

The GIF-based company now has its hooks in Facebook Live, Camera and Messenger on iOS and Android. While the social network continues to chase Snapchat with AR and 3D elements, the addition of Giphy adds not only a bit of whimsy, but a treasure trove of animated images at your fingertips.

In addition to Giphy's face-tracking and augmented-reality tech (which at this point is built into nearly every service out there), the company lays claim to one of the deepest GIF libraries on the web. That's what's really going to set it apart when you're looking to add something fun to your Facebook Live stream. That is, if you're cool with it looking like a news broadcast. Which I am.

The Facebook Live Giphy feature puts you in a virtual newsroom with trending hashtags for GIFs that you can tap and "report on." Look at me, I'm Kent Brockman! What's more fun is that viewers can comment with hashtags and the broadcaster can choose to add those to their video. It's an interactive GIF party, and it's all live.

The Facebook Camera integration is a bit less exciting. It adds thought bubbles above people that can be filled with GIFs from eight different topics: Trending, Heart It, Hungry, Dreaming, Yay, Sad Face, Huh and Cute Critters. Individual images that load into the bubble are dismissed either by tapping the screen or shaking your head. A nod generates a rain of elements (like paws and stars) based on the image.

The resulting GIFs generated by the feature can also be added to the mostly neglected Facebook Stories feature, or downloaded to the user's camera roll. "When you create content, you're not always thinking 'This is just for my Instagram friends,'" said Giphy design director Ralph Bishop. "Companies want you to think like that, but we don't. We're people with real relationships in the real world that bridge those barriers. So there is a download button before you share it, which is nice."

The same can be done with the GIFs sent via Messenger. Send an image or download it to your phone. It's a nice break from Facebook's siloed experience and makes the Giphy integration just that much better.

Of course, there's a chance that the bloat will make it difficult for some users to even find the little gems, like this Giphy implementation, that keep being added. I suppose when you're trying to overtake Twitter, Snapchat and a string of doomed flash-in-the-pan social networks, you need to add absolutely every feature to your service. Or maybe you don't. Either way, Facebook is going to find out.

In this article: f82017, facebook, FacebookCamera, FacebookLive, gear, GIF, Gihpy, google, hands-on, internet, MEssenger, mobile, services
All products recommended by Engadget are selected by our editorial team, independent of our parent company. Some of our stories include affiliate links. If you buy something through one of these links, we may earn an affiliate commission.