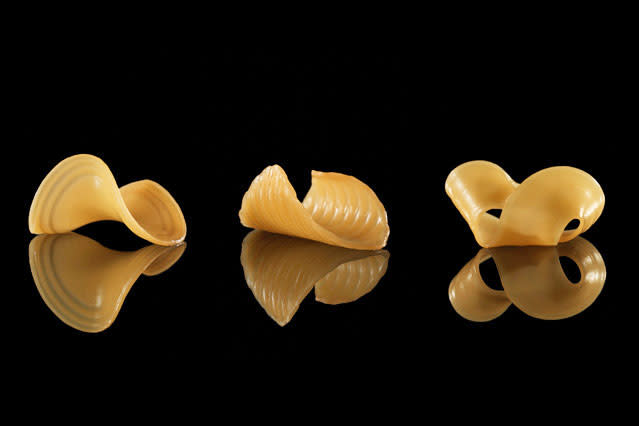 A new research project from the Massachusetts Institute of Technology's Tangible Media Group combines 3D printing, molecular gastronomy and macaroni. According to MIT News, researchers Wen Wang and Lining Yao have engineered flat sheets of gelatin and starch into shape-shifting noodles that react and fold when exposed to water. While Yao's goal of one day creating a self-folding dumpling is still out of reach for now, the research team thinks their breakthrough could help reduce food shipping costs and lead to new trends in fine dining.

Wang and Yao were actually working with bacterium that respond to humidity when they started playing around with edible materials that would have a similar effect. The noodles are made of thin layers of gelatin with different densities. As the dense top layer absorbs water, it bends over the less-dense bottom layer creating a simple piece of tube-shaped pasta. By 3D-printing strips of cellulose starch over the top layer, the research team was able to control the final shape of the noodles and create everything from traditional rigatoni to avant-garde mushrooms and blossoming flowers. To show off their research, the team worked even with chef Matthew Delisle from Boston's L'Espalier restaurant to create noodles that could be incorporated into dishes worthy of their own Chef's Table segment:

While the noodles are definitely fun to look at, the Tangible Media Group came up with another, more pedestrian application for them as well: pasta makers could create flat-packed noodles to reduce volume, packaging waste and shipping costs. "We did some simple calculations, such as for macaroni pasta, and even if you pack it perfectly, you still will end up with 67 percent of the volume as air," Wang said. "We thought maybe in the future our shape-changing food could be packed flat and save space."

While the MIT team had access to a lab-grade 3D printer and modeling software, they've also laid out instructions for creating shape-shifting pasta with lower-tech methods like screenprinting. There's also a database of pasta patterns that anyone can use to print their own versions in the future and the team envisions a system where anyone can just order up custom pasta shapes online. There's only one problem at the moment: while Wang says the noodles "had great texture and tasted pretty good," her colleague Yao pointed out to Popular Science that the noodles are still mostly gelatin -- meaning they're pretty, but might not have the same satisfying starchiness of real pasta. Still, Yao is hopeful that her pasta research, which was partially funded by Target's Food + Future incubator, will continue to develop new starch-heavy gelatin films and folding methods. As for the self-folding dumpling: "It turns out that's really hard," Yao says. "We can get there eventually, I think."

In this article: 3D-printing, applenews, art, gear, MassachusettsInstituteOfTechnology, pasta, tangiblemediagroup
All products recommended by Engadget are selected by our editorial team, independent of our parent company. Some of our stories include affiliate links. If you buy something through one of these links, we may earn an affiliate commission.