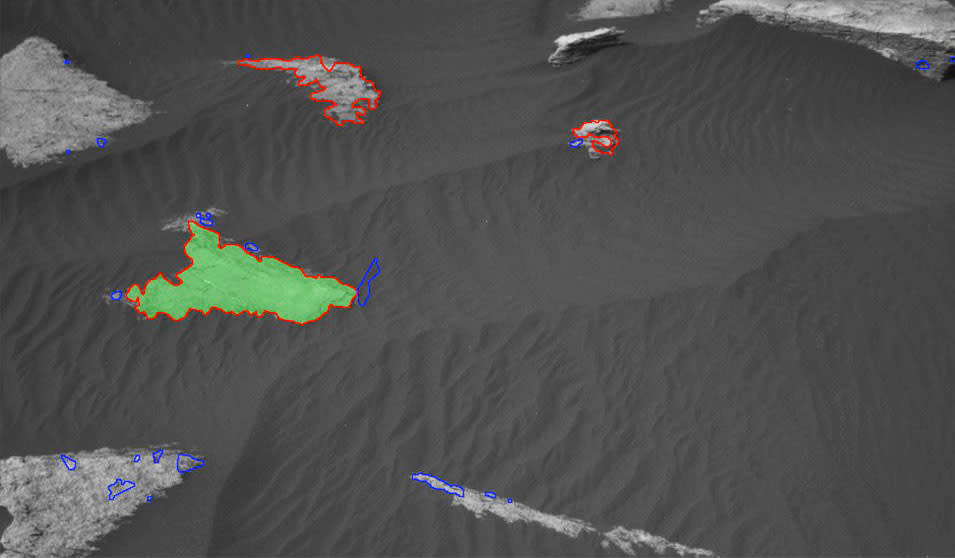 If we truly want to go to Mars, then we really need to know what it's made of -- it's hard to bring everything you need from Earth. NASA's Curiosity Mars rover has been using specialized AI software to zap soil and rocks on the planet this past year to discover what each is made of. The software that guides the rover's efforts is called AEGIS, or Autonomous Exploration for Gathering Increased Science. AEGIS allows the rover to get more science of this nature done while Curiosity is out of contact with its human controllers, according to a new paper published by NASA in Science Robotics.

"Time is precious on Mars," said lead system engineer Raymond Francis in a statement. "AEGIS allows us to make use of time that otherwise wasn't available because we were waiting for someone on Earth to make a decision."

The AEGIS software operates in two different ways: autonomous target selection and autonomous pointing refinement. Basically, these two systems allow the rover to select targets and refine its own laser targeting to analyze samples chosen according to the parameters scientists have selected beforehand. The software has performed at a very high level, exceeding 93 percent accuracy when choosing the correct materials to analyze. According to the paper, the AEGIS autonomous system has "substantially reduced lost time on the mission" and increased the speed of data collection. Before AEGIS was implemented last year, the rover carried out blind targeting, just in case it hit something worthwhile. "Half the time it would just hit soil -- which was also useful, but rock measurements are much more interesting to our scientists," Francis said.

The system has been so useful that NASA is including AEGIS in its upcoming Mars 2020 mission, with an updated version of the imaging system called SuperCam. This new device will have more advanced analysis capabilities to study the crystal structure of rocks.

In this article: aegis, applenews, chemcam, curiosity, gear, mars, nasa, robots, rover, space
All products recommended by Engadget are selected by our editorial team, independent of our parent company. Some of our stories include affiliate links. If you buy something through one of these links, we may earn an affiliate commission.