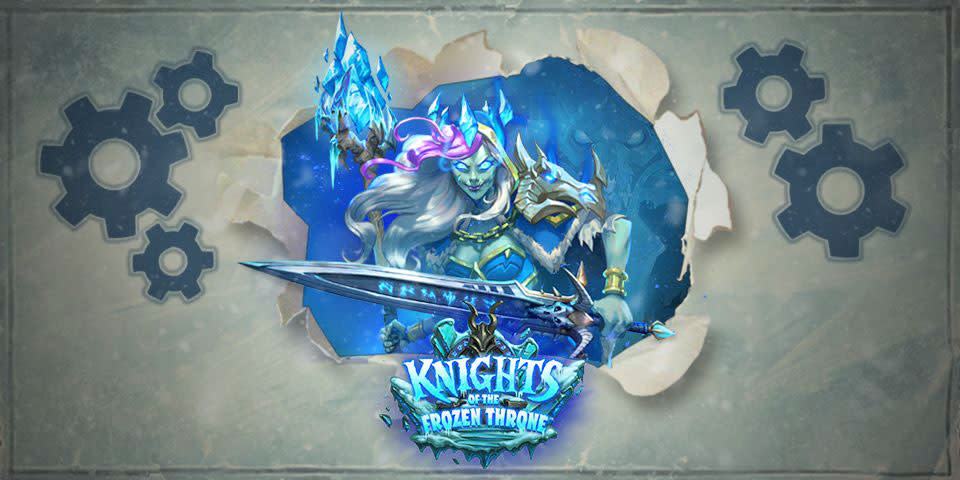 Blizzard's digital card game Hearthstone's newest full expansion is now live. Knights of the Frozen Throne brings 135 new cards and free solo content to the title and a couple new mechanics, which will shake up the game's competitive meta. Sure, it's a lot of what we've come to expect from a Hearthstone expansion, but who can complain about new additions to tried-and-true gameplay?

Be careful what you say, you never know who might answer back. #FrozenThrone is now live for the Americas region! https://t.co/ud6lLAV2wC pic.twitter.com/dKZgoWH00V

As we previewed back in July, Knights of the Frozen Throne brings a couple new mechanics to the game. The first, Lifesteal, does what it says on the tin: Damage dealt gives life to your hero. (Certain old cards with essentially the same function, like tiny taunt king Wickerflame Burnbristle, have been retroactively re-labeled with this mechanic.) The expansion's other new feature are Hero Cards, which change your hero's appearance and power. In keeping with Knights' theme, these Hero Cards will change the player into fearsome death knights with appropriate undead abilities.

The expansion's card pool, which r/Hearthstone has helpfully collected in one place, harnesses the new mechanics (and, yes, the Frozen Throne's big baddie The Lich King gets his own card). But there are also several clever, never-before-seen interactions that should delight deck tinkerers. The last expansion, Journey to Un'goro, raised the bar with a set full of high-quality cards and relatively few clunkers. It's a high standard for Knights to live up to, but the collection looks intriguing. How could it not with amazing cards like Bearshark?

But the expansion also brings a highly-awaited game mode back. At the beginning of 2017, Blizzard announced that it would ditch the smaller Adventure content releases in favor of three full-size expansions per year. While that means more cards to tinker with, it also angered some players who enjoyed the solo expeditions in each Adventure. To make up for it, Knights features single-player Missions absolutely free that award cards for completion (including a random legendary Hero Card at the end of the prologue). That -- along with the three free Knights packs gifted to all players today -- is Blizzard's way of trying to make up for how much more expensive it will be to get all of this year's content.

In this article: av, blizzard, BlizzardEntertainment, CardGames, expansion, gaming, hearthstone
All products recommended by Engadget are selected by our editorial team, independent of our parent company. Some of our stories include affiliate links. If you buy something through one of these links, we may earn an affiliate commission.