This Infiniti EV defies all logic, but you will want it anyway

We rarely buy cars based on logic. It's usually about the emotional reaction to a vehicle: How it looks, how it drives and the way it makes us feel when we're seen behind the wheel often seal the deal. Sometimes, though, cars are thrust upon us. Our first car might be a hand-me-down, or maybe financial issues limit our choice. Even if we end up with a vehicle that's more Bondo than burnished metal, we often still form an emotional connection with our wagon. Our most memorable cars (be they low-cost commuters or high-end supercars), make us feel something.

The Infiniti Prototype 9 is the embodiment of feeling, a magnificent vehicle that takes design cues from the 1940s and creates a piece of art that exudes adventure. The car started off as a request to look into Infiniti's (and parent company Nissan's) past and find something that links it to today's world.

Alfonso Albaisa, Infiniti senior vice president of global design, looked back further than expected, to the grand prix races in 1940s Japan. "As soon as that hit, it kind of dominoed," he said. What started as a sketch turned into foam mock-ups before passing through Nissan's research center in Oppama -- all built in seclusion. The automaker's advanced engineering team also got in on the action, making it an electric vehicle. Employees from various departments all came together to work after hours to make the metal EV racer a reality. 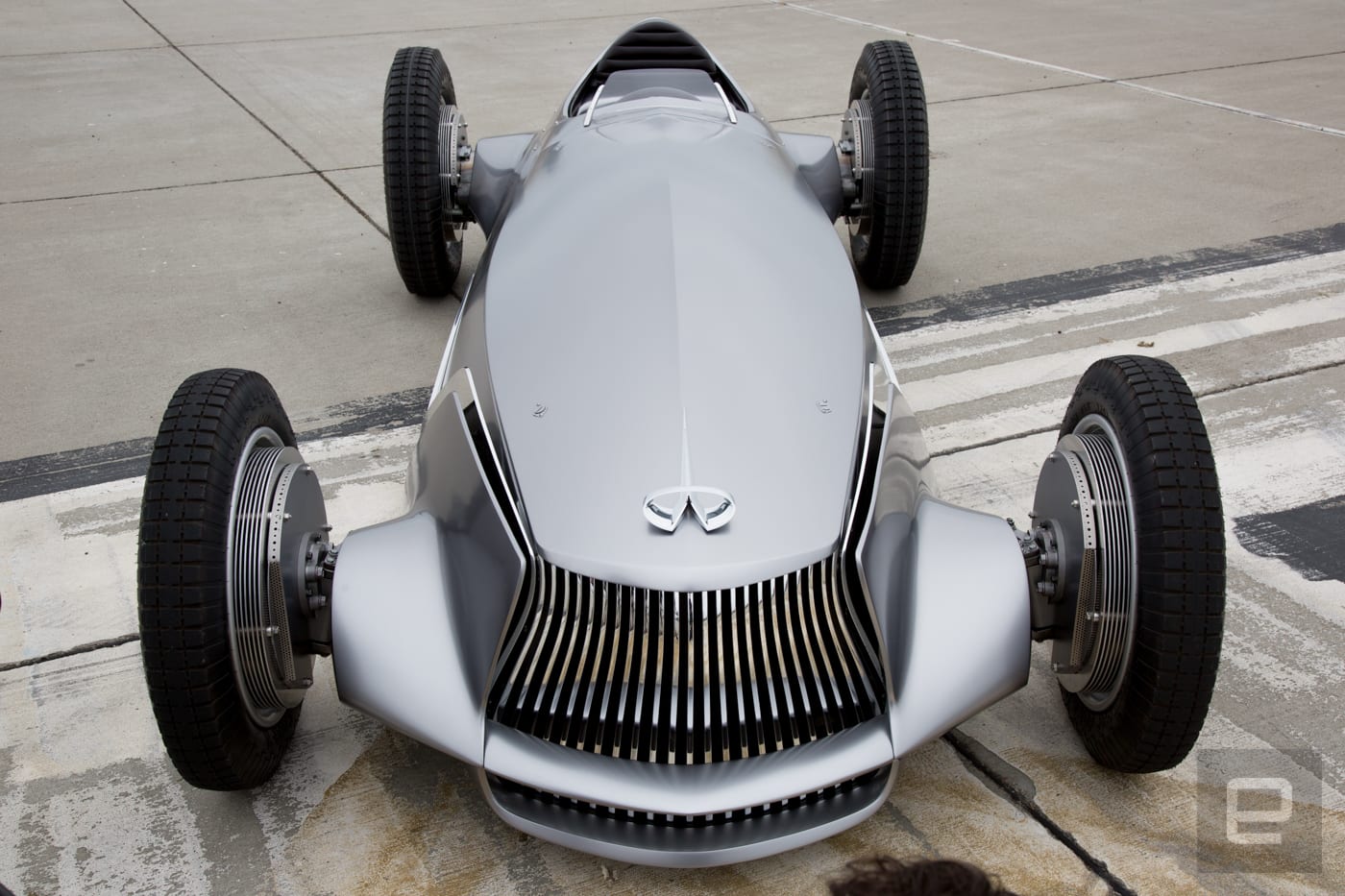 Typically when you see the early photos of a new car or concept vehicle it's expected that it won't look quite as good in reality. But when I saw the Prototype 9 on an abandoned runway in Alameda, California, I was taken aback by how stunning it was in real life. I actually joked that I would trade a kidney for the car. I might have been half serious.

While I was there, the car was driven rather gingerly up and down the runway. The Prototype 9's silent drivetrain is a stark contrast to the roar of the vehicles it's based on. Infiniti says the steel-framed car, wrapped in hammered steel panels, is capable of doing 105.6 miles per hour and will get from zero to 100 kilometers per hour (62 mph) in 5.5 seconds.

Neither of those benchmarks were shown off in Alameda, and frankly, those numbers only matter if Infiniti decides it'll use the Prototype 9 as the basis for a new EV -- and hopefully it'll do just that. The Prototype 9 has been well received, so there's a chance something like it will appear in showrooms in a few years. Electric cars need a new roadster: After all, the Tesla is getting long in the tooth, and Elon Musk's company now has its hands full with all of those Model 3s it needs to build.

Infiniti's current lineup lacks a convertible, and its future (like most automakers) is filled with SUVs and crossovers. People want big cars. They want to know that their raised station wagon could handle some off-roading should the opportunity ever present itself. But there's still a market for a car without a top. The Mazda MX-5 Miata is proof of that.

While I wait for an EV without a roof I can actually buy, I was able to sit in the concept of one briefly. I wasn't allowed to drive it: Maybe they knew I'd leave and never return? Like nearly all race cars it's too small for my tall frame. But I squeezed in, and it reminded me of the first time I drove my first car: a Datsun roadster with a horrible yellow paint job and a laundry list of problems. But I was instantly reminded of how much I loved that car at the time and the freedom it afforded me. 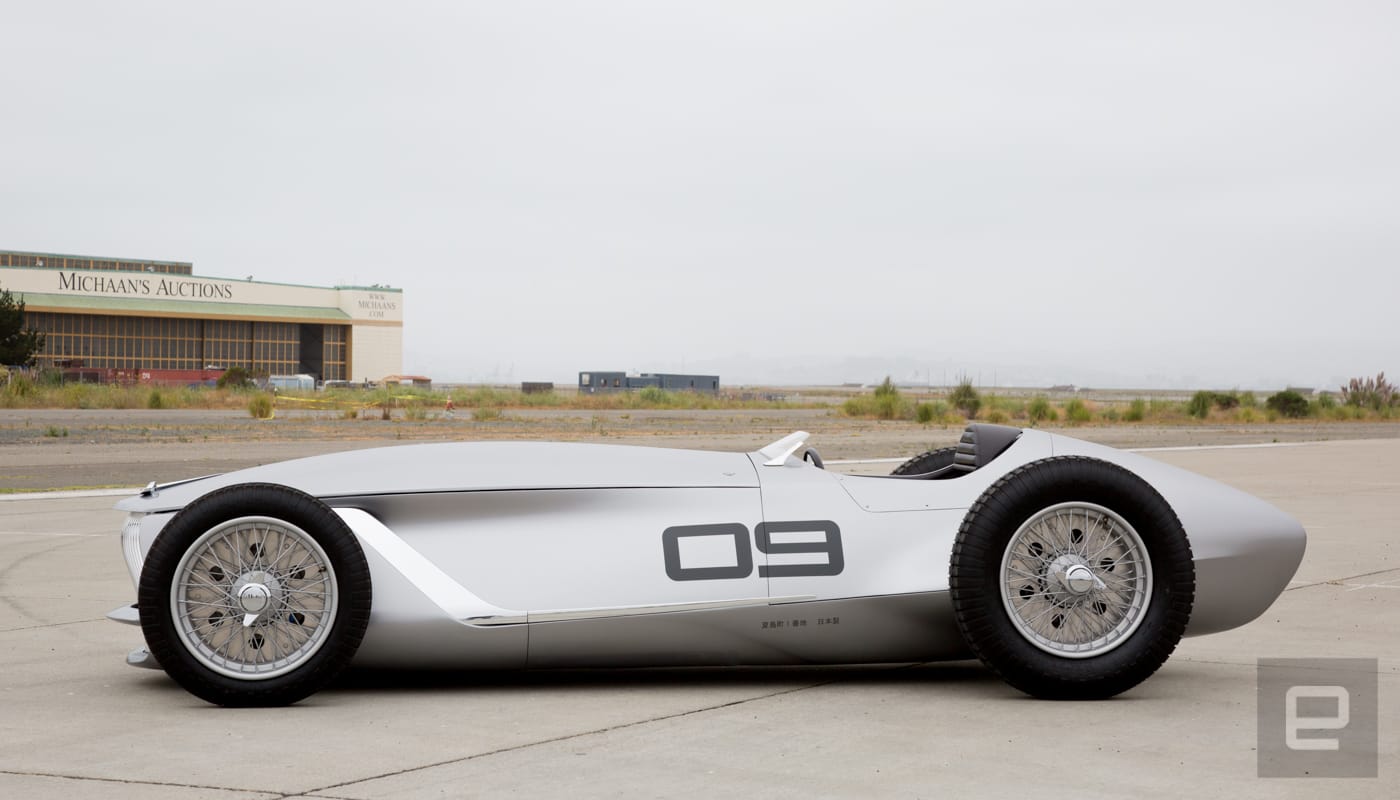 It's ridiculous to assign emotions to an inanimate object, but that's what we do with our cars. They're our escape or second home and, more importantly, an extension of ourselves. It's going to be decades before autonomous cars take over the roads. Until that happens, let's bask in the joy of driving, celebrate the art of cars like the Prototype 9 and hope that we get something similar from an automaker in the future. Let's hope it comes with more legroom.