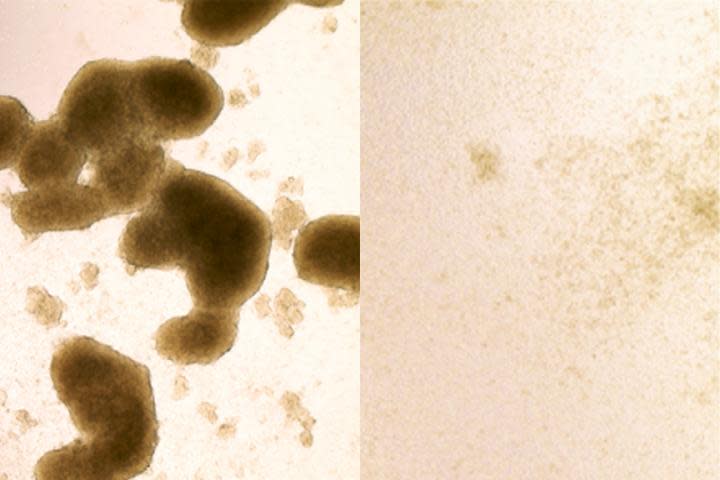 While Zika is known for causing birth defects like microcephaly and brain damage, it turns out the virus might also serve a very useful purpose -- fighting brain cancer. In a study published today in The Journal of Experimental Medicine, researchers show that Zika can actually take on a very hard to treat type of brain cancer.

Glioblastoma is the most common type of brain cancer in the US -- John McCain was just recently diagnosed with it -- and treatment usually incorporates surgery, chemotherapy and radiation. Even so, glioblastoma tumors often recur within months. Standard forms of therapy can do well against the majority of the tumor cells, but leave behind the stem cells that generate the tumors, allowing them to keep creating more tumors once the originals are removed. But Zika actually does the opposite -- it can target the stem cells and skip over the other tumor cells. So, in theory these different treatments would work quite well when used together.

This feature of Zika is what makes it so problematic for fetuses. The virus gets into the developing central nervous system and kills neuroprogenitor cells -- the cells that become various types of brain cells later on. The researchers noticed that the glioblastoma stem cells behaved a lot like neuroprogenitor cells, which turned them towards Zika as a potential therapeutic.

In experiments, Zika virus was able to kill stem cells removed from patients with glioblastomas and when it was injected into tumors in mouse brains, it caused the tumors to shrink. The researchers also demonstrated that the virus didn't tend to infect non-cancerous brain cells and mutated versions of Zika that made the virus weaker against the body's immune system were also able to kill glioblastoma cells, though not quite as well as the original strains.

The researchers aren't proposing it for human studies just yet -- though others are -- and the virus works differently in mice than it does in humans. But because Zika isn't a major risk to adults, these findings show that it could be a promising brain cancer treatment in the future.

In this article: BrainCancer, CancerTreatment, gear, glioblastoma, medicine, tomorrow, tumor, Zika
All products recommended by Engadget are selected by our editorial team, independent of our parent company. Some of our stories include affiliate links. If you buy something through one of these links, we may earn an affiliate commission.